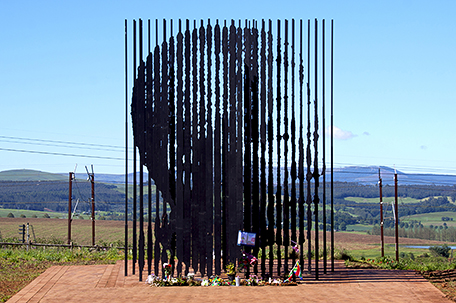 ABOVE PHOTO: Metal sculpture of Nelson Mandela at the site where he was arrested in 1962 by the apartheid government.  (Photo: lcswart/shutterstock.com)

Durban looms large in the history of South Africa in general and of the Zulu in particular.

On December 24, 1497, Vasco da Gama sailed into Durban’s Bay. On the next day, he named the area “Terra do Natal,” the land of Christmas.

In 1824, the British made contact with Shaka, King of the Zulu. Shaka remains so revered that elements of “Black Panther” were taken from his legend. In 1835, the area was named after Gov. Benjamin D’Urban. Shaka granted permission for the British to build a trading station. Durban remains the country’s largest port and the second biggest city.  (www.durban.gov.za)

The Zulu were never thrilled with the presence of outsiders and fought periodic bloody battles to preserve their homeland. The final uprising took place in 1906. In 1844, the region became part of the British Cape Colony.

The Inanda Heritage Route interprets the story of the Inanda Valley just outside of Durban. Gandhi’s Phoenix Settlement, his 100-acre farm and home, is now a museum. The nearby Ohlange Institute was founded by John Dube and modeled on the Tuskegee Institute. Dube also founded the African National Congress and was greatly admired by Madiba. After casting his first vote in 1994 in the school’s chapel, Mandela visited Dube’s grave and reportedly said, “Mr. President, I have come to report to you that South Africa is free today.”  (www.visitdurban.travel)

The Nelson Mandela Capture Site is located on the site where he was captured in August 1962. Mandela, disguised as a chauffeur, was apprehended, after a 17-month police pursuit, on this road between Durban and Johannesburg. He stepped out of the car and onto a broader stage of history. A temporary museum exhibits compelling photographs, many rare family pictures. A magnificent sculpture, 31-ft. high and 99-ft. wide is comprised of fifty steel columns that when viewed at a certain angle depict a two-dimensional image of Madiba. The emerging picture represents his disappearance and reemergence 27 years later. The sculpture is accessed via a twisting path lined with wayside markers that relate benchmarks in his journey.  (www.thecapturesite.co.za)

LaVue Floating Restaurant is one of Durban’s unique treasures. The boat offers two decks, two bars, an amazing buffet and dancing beneath the stars. Guests obtain awesome views of the city skyline.  (www.la-vue.co.za)

Port Elizabeth, part of the Nelson Mandela Bay Metropolitan Municipality, was founded in 1820 as a buffer between the Xhosa and the Cape Colony. The city was named in memory of the wife of Sir Rufane Donkin. In 1965, enforced removals of non-Whites began and townships were created. The Donkin Heritage Trail links 51 historic locations and interprets the history of the city.  The trail begins at The Campanile, a 176-ft., 204-step, tower with 360-degree views.  (www.nmbt.co.za) 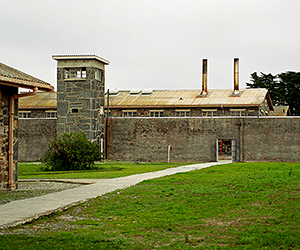 Route 67 is an arts and cultural route that features 67 public art works representing Madiba’s 67-year journey to free South Africa. The route begins at the Campanile Monument and ends at the Nelson Mandela Metropolitan Art Museum. The route’s premiere artwork is the 125-ft. long Voting Line sculpture depicting his first vote at the age of 72. The laser-cut figures represent children and people from all walks of life.  (www.route67tours.co.za)

The 5-star Boardwalk Hotel stands on the Golden Mile. All of the accommodations boast deluxe amenities and ocean views. (www.suninternational.com/boardwalk)

Cape Town, known as “The Mother City,” was established to resupply the Dutch East India Company. In 1795, the British seized the town and in 1814 they took total control. In 1910, it became the legislative capital of the Union of South Africa. After apartheid was enacted,many of the anti-apartheid leaders were incarcerated in the prison on Robben Island.

Table Mountain has been inhabited for more than 30,000-years and was sacred to the Khoi and San people. The first European to sight it was Bartolomeu Dias in 1448. In 1929, a cable car was installed so that visitors could ride to the top at 3563-ft. above sea level. No trip is complete without a visit and a view.  (www.tablemountainnationalpark.org)

On a City Walk you can take in the Slave Lodge, a museum on several levels. Exhibits feature South African slavery history and modern human rights.  (www.iziko.org.za/museums/slave-lodge)

Robben Island, a World Heritage Site, was the scene of Madiba’s incarceration for 18 years. He and other activist prisoners turned their imprisonment into an opportunity to educate and to learn. Mandela later stated that the time on the island was, “the longest unbanned meeting of the Congress alliance.” 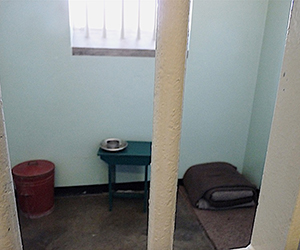 Visits begin with a boat ride to the island followed by a narrated bus ride to the significant sites. Your guide for the walking prison tour is a former prisoner who takes questions and escorts you to Mandela’s cell. Other important areas are the limestone quarry where the prisoners worked and the garden in which Mandela hid the manuscript he later had smuggled out.  (www.robben-island.org.za)

The 5-star Table Bay Hotel is simply the best place to stay in Cape Town. The accommodations are luxurious and it is situated on the V&A Waterfront, in the heart of the action.  (www.suninternational.com/table-bay)

The perfect place to end our path through Madiba’s journey is in Nobel Square on the waterfront. There sculptures of Desmond Tutu, Nkosi Albert Luthuli, F.W. de Klerk and Nelson Mandela, all Nobel Prize winners, are arrayed in the square for contemplation and photo ops. These are people who worked to become the change they wanted to see.  (#VisitSouthAfrica)

Madiba’s Journey is available as an application.  (www.madibasjourney.southafrica.net)

Nelson Rolihlahla Mandela’s 2018 Centenary Celebration: Be the Legacy (part one)