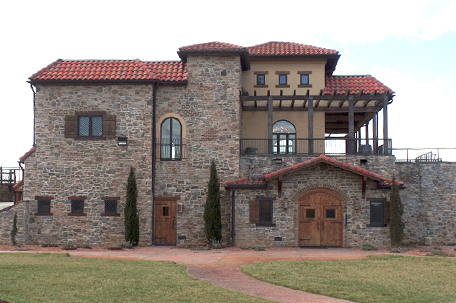 “Runnin’ with your cousins from yard to yard, Livin’ was easy but the playin’ was hard.”

The first survey of Mount Airy took place in 1747 and settlers were already living there. The town was named after an existing plantation owned by Thomas Perkins and the name became official in 1798. Nestled in the Blue Ridge foothills early on it emerged as a trading center and a provisioning and resting point on a primary road between North Carolina and Virginia. and was always a tourist town. #visitmayberrync

The city is recognized as  “The Granite City” because a large number of homes, churches and other constructions are made of granite. In 1889, what remains the largest open face granite quarry in the world began operation. This is the world’s whitest granite and scientists state that the quarry can be mined for 500 years without depletion. Visitmayberry.com

Mt. Airy is an international destination because of its music heritage sites, its unique historical stories and its place in television history as the “real” Mayberry and birthplace of Andy Griffith. Griffith was born there in 1925 and based names and places in the show on residents. Barney’s Squad Car tours are available to add to the fun.

Sites include Griffith’s homeplace the Old Jail, Floyd’s Barbershop and the Andy Griffith Playhouse.  The Andy Griffith Museum is outstanding with tours featuring memorabilia, costumes, artifacts and videos. Stunners in the collection include Matlock’s Office and original costumes. A great exterior photo op is a small grove with a statue of Andy and Opie on their way to the fishing hole.

Annually the Surry Arts Council presents Mayberry Days, a celebration of the show and the spirit it engendered. This year it will be held September 21-25, 2016. surryarts.org/mayberrydays 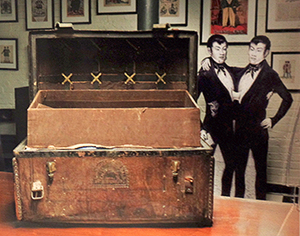 Trunk and picture of Siamese Twins Eng and Chang.

Adjacent to the museum is the Siamese Twin Exhibit dedicated to telling the story of conjoined twins, Chang and Eng Bunker. By all accounts they were athletic and lived relatively normal lives in Siam until discovered and brought from their country to tour the world. In the 1830s the brothers settled in North Carolina and wed sisters, ultimately producing 22 children.  Each family had its own residence and they alternated their time with each family.

They retired from show business and became farmers and slaveholders. One of their slaves, Grace Gates, was “gifted” to them in 1843. She raised the children and died in 1921. The Civil War devastated them financially because their money was in Confederate dollars. They died in January 1874. Their autopsy was conducted in Philadelphia and specimens were sent to the Mutter Museum where a death cast of their torso is displayed. Siamesetwinsexhibit.com 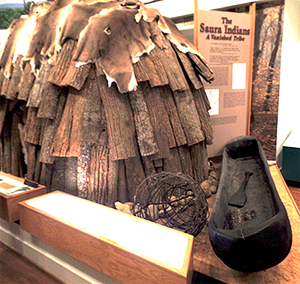 The Museum of Regional History is the best way to become oriented to the area and uniquely an exhibited mural and a trip to the observatory provide a comprehensive view of the region once known as “The Hollows.” The 35,000-ft. exhibition space is arranged both chronologically and thematically. Self-guided tours begin with natural history and culminate with modern industrialization. Galleries present historical vignettes in original structures including a general store and log cabin. northcarolinamuseum.org

The Blue Ridge Music Trail of NC includes more than 60 sites and a plethora of festivals, broadcasts, jamborees and jam sessions. The trail immerses you in the musical heritage created by Native Americans and the original English, Scotch-Irish and African American settlers. Live bluegrass, blues, gospel and old-time music venues abound. Currently one of the hottest bluegrass groups is the African American Carolina Chocolate Drops and they are frequently mentioned along the trail. blueridgemusicnc.com

The 1938 Earle Theater was one of the South’s most famous theaters and premiered both “Gone With the Wind” and “A Face in the Crowd.” Today it houses the Old-Time Music Heritage Hall and offers audio-guided tours. The tour includes exhibits, a documentary and portraits and highlights the performances of Tommy Jarrell. Live shows are presented each Saturday. Theearle.org

WPAQ Merry-Go-Round premiered in 1948 and is second to the Grand Ole Opry as the longest continuously running live broadcast in the country. The list of artists who have performed here live includes both local performers and international artists. Tours are offered. The show airs on Saturdays at 11 AM using some original equipment.

The Andy Griffith Show’s most ardent fan relocated from Ohio to open a restaurant in Mt. Airy and The Loaded Goat takes its name from one of the episodes. It features casual dining with a complete menu of pub favorites and brews. theloadedgoat.com

North Carolina was the nation’s largest wine producer until Prohibition. In the 1990s the government paid farmers not to grow tobacco and NC growers turned to grapes as a replacement crop. The number of vineyards now exceeds 400 with 150 wineries.

Old North State Winery is one of the largest wineries in the state. They offer a Tapas menu with southern influences and a complete schedule of events and entertainment. The winery is housed in an 1885 General Store. The building’s façade was destroyed in 1926 and when purchased in 1969 was reconstructed. During the process an arm was found and it is said that the “Restless Soul” still haunts the building. The ONS Winery has dedicated a wine to the spirit. Oldnorthstatewinery.com

Raffaldini Vineyards is one of the most beautiful vineyards in the state. They planted their first grapes in 2001 and have experimented with 30 types of grapes in order to create the best wines possible. Tastings, dining and purchasing options are offered. Raffaldini.

The 12th annual Caribbean Cuisine Week will take place from April 13-15. This is Philadelphia’s opportunity to taste Caribbean and Latin-inspired dishes in participating restaurants while supporting a good cause. A portion of the funds raised will help provide funding for 700 Caribbean high school athletes to participate in the largest track and field event in the nation, the Penn Relays. Athletes such as Usain Bolt have benefitted from CCW. caribbeancuisineweek.com