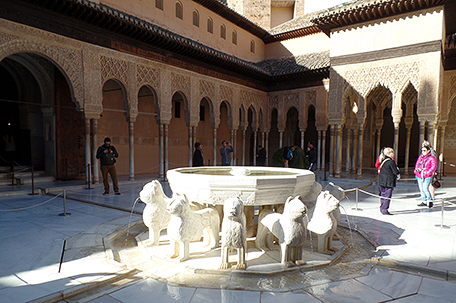 “How lazily the sun goes down in Granada, it hides beneath the water, it conceals in the Alhambra.”

It is believed that Córdoba was originally settled by Carthaginians and became a Roman city in 152 BC. In 45 BC, Julius Caesar killed more than 15,000 Córdobans in retaliation for their support of his rivals and his successor Caesar Augustus made the city the Roman provincial capital of Baetica. The Visigoths invaded, conquered and ruled the region from the 6th to the 8th-centuries AD.  In 711 AD the Moors conquered Córdoba and Abd al-Ramān I made the city the capital of El Andalus in 756.

Córdoba is situated at the base of the Morena Mountain Range where the river bends, on the north shore of the Guadalquivir River at its highest navigable point. The Romans took advantage of the strategic location and the city functioned as a port for shipping goods back to Rome. Emperor Augustus built El Puente Romano over the river. The bridge, which is still visible, has 16 arches and is 810-ft. long and 30-ft. wide. Midway the bridge is a statue of San Rafael by Bernabé Gómez del Río dating from the 1500s.

While Córdoba thrived under Roman rule it did not achieve its full glory until the Moorish conquest. In 929, under he rule of Abd al-Ramān III, “The Caliph of the West, Córdoba became the intellectual center of Europe as well as its largest city. Within the walls and the surrounding 21 suburbs there were 700 mosques, more than 300 public baths, paved streets with raised sidewalks, streetlights, a central water supply, 17 universities and more than 70 public libraries featuring more than 700,000 volumes. Improving on the existing irrigation system, the Moors introduced an overwhelming number of new crops including almonds, apricots, artichokes, aubergine, bananas, cotton, coriander, cumin, figs, grapes, henna, lemon, oranges, peaches, pomegranate, rice, saffron, silk and sugar cane.

The Historic Center of Córdoba was designated a UNESCO World Heritage Site in 1984 based on the fact that it is the best preserved of Spain’s Moorish cities, its historical importance and its testimony to the three major cultures that resided there. The area is best visited on foot and includes the Old City and the Roman bridge outside of the walls.

The Juderia, the Jewish Quarter dates from the 10th-Century and a walk through the meandering streets allows you to immerse yourself in the ambiance of a medieval city. The streets, northwest of the Mezquita Cathedral, are too narrow for anything other than foot traffic. The white houses that line the streets have flower-bedecked balconies facing the street and ornate doors that open onto patios.

Córdoba’s synagogue was constructed in 1315 by Simon Majeb and is a simple square room with a balcony for female worshippers. The walls feature plasterwork inscribed with Mudejar reliefs with plant motifs and references to the psalms. It was converted to a church in the 1500s and the reliefs were covered. It is one of three original synagogues in Spain and is located on Calle de los Judios.

Near the synagogue is a seated bronze sculpture of Maimonides. He was born in 1135 and resided in the city until he fled to Egypt. He remains one of the most studied Jewish philosophers and religious scholars. He practiced medicine and many modern hospitals have taken his name. He systematized Jewish law as stated in the Pentateuch and Talmud and because of this foundation of American law his visage is one of 23 over the gallery doors of the House Chamber of the US Capitol.

One of the world’s most breathtaking buildings, the Mezquita de Cordoba, is located in and is the heart of the city. The Great Mosque, at one time the largest in the world, spectacularly showcases the history of the city through Pagan, Islamic and Christian architecture. Construction began in 785 AD on the site of both a former Roman temple and Visigothic Church of St. Vincent at the command of Abd-er-Rahman I. Enlargements were made in 833 and 987 under subsequent rulers.

The mosque is 76,700-sq. ft. square with a crenellated square exterior and forecourt for ritual cleansing. It is filled with 856 columns, there were 1293 originally, with red and white Moorish arches and brass and silver lamps that burned perfumed oil. The columns are carved granite, jasper, marble, onyx and porphyry and polychromatic mosaics adorn the octagonal dome. It should be noted that the Byzantine Mihrab, a semicircular niche that usually allows worshippers to orient themselves toward Mecca, does not face Mecca.

King Ferdinand reconquered Córdoba in 1236 and he immediately reconsecrated the mosque. In 1523, Charles V decided to alter the Great Mosque. The citizens were against the decision but Charles persisted. He is said to have regretted it upon completion in 1526. The builders removed columns in order to facilitate the construction of a 17,000-sq. ft. Gothic church, shaped like a Latin cross, in the middle of the mosque. A 305-ft. bell tower was constructed where the minaret had been. The staircase is steep but it offers one of the best views of the city.

Moorish occupation of Spain began in 711 AD led by Tariq ibn-Ziyad. Al Andalus, as the Africans referred to it, was conquered with the exception of a small contingent living in the mountainous northern region. The Christians would use this area as a base to reconquer Spain. Scholars divide the Moorish era into three periods ending with the Reinos de Taifas, rule of small kingdoms in 1492. Ferdinand of Aragon and Isabella of Castile wed in 1469 and the unification of their two kingdoms made them powerful enough to complete the Reconquista and finance the first voyage of Columbus that same year.

The importance of the ascension of Ferdinand and Isabella cannot be stated strongly enough. With the expulsion of the Moors they could turn their attention to the New World and the riches it held. Trans-Atlantic black slavery was instituted and from 1501 -1518 blacks were transported into slavery from Iberia. In that year Charles licensed the sale of Africans in the Americas thereby inaugurating a lucrative new industry, the West African slave trade. Spain upheld slavery for the next 368-years until it was abolished in 1886. New World slavery, gold and silver ushered in Spain’s Golden Age.

Granada was the last city to be reconquered and it is fitting that any visit to Spain end in its most magnificent structure, the Alhambra, the “red one,” the most visited monument in the country. The Alhambra and Generalife were inscribed as a UNESCO World Heritage Site in 1984.

Muhammad ibn al Ahmar established the Alhambra in 1238. It was completed by Yusuf I in the 1300s and served as the royal residence enclosed by 15-ft. thick walls. It is situated on Assabica Hill that provides panoramic views of Granada. Essentially there are 2 rectangular plazas, the Patio de Los Arrayanes and the Patio de Los Lames. Highly decorated rooms with stunning architectural elements that function as pavilions, halls and living rooms surround each courtyard.  Marble columns, inlaid mosaics, decorative plasterwork and fountains fill the rooms. Inscribed verses of poetry and the Koran can be seen throughout.

Visitors enter through the Gate of Justice. At one time the Caliphs held audience with the people while seated here and administered justice.  The Court of the Lions is an equally important site. The 12 marble lions supporting the fountain are said to represent the 12 tribes of Israel. The Jewish community donated it to the ruler. The Hall of the Ambassadors once held the Caliph’s throne and in this room he received foreign dignitaries. In the Alhambra the Christian monarchs signed the Edict of Expulsion and Columbus received a license to search for a route to Las Indies.

East of the Alhambra stands the Generalife, the suburban enclave of the Emirs. Here the gardens take precedence over the residences and pavilions. These splendid gardens were created to be viewed while seated on the ground enjoying summer breezes, wine and companionship. They strive to replicate the Moorish concept of paradise.

The Royal Chapel of Granada was completed in 1521. The Royal Tombs of Ferdinand and Isabella are housed within as well as the Sacristy Museum featuring objects belonging to the king and queen including Isabella’s crown and scepter and Ferdinand’s sword.

Domenico Fancelli carved the 1517 Carrera marble tombs of Ferdinand and Isabella. Bartoloméo Ordonez sculpted two additional tombs, those of Philip and Johanna, in 1520. The lead coffins of the 4 monarchs are located in a crypt beneath the tombs. Visitors should note that Isabella’s head rests higher than Ferdinand’s in the sculpture. Some believe this denotes that she was the most powerful of the pair.

The final capitulation of the Moors was brought about by a series of events. The harem, always a place of intrigue and plotting, was home to several women with sons who felt they held a valid claim to the throne of Granada. Civil war broke out and this proved advantageous for the Catholic rulers. One of the contenders, Boabdil, was captured and promised to surrender the city once the others were subdued. Ferdinand agreed but when the rivals were vanquished Boabdil reneged. Ferdinand elected to blockade Granada and ultimately Boabdil agreed to terms. He was to receive 30,000 gold coins, land and freedom of religion for his followers. On January 2, 1492 the Ferdinand and Isabella entered Granada as victors.

Contemporary accounts describe the scene and place Christopher Columbus in the crowd. The monarchs were dressed regally for the occasion, as were the Moors. The Sultan rode out of the city and passed the key to Granada to them. They proceeded into the city and hung their banners from the walls of the Alhambra as the Moors were expelled.

El último suspiro del Moro, the Moor’s Last Sigh,” is both a physical site and an enduring legend from the era. As Boabdil rode south he paused on a promontory to look back at the splendor that was Granada. Suddenly the magnitude of his loss hit him and he began to weep. His mother, who had fought so hard for him to gain the throne is o have said, “Weep like a woman for what you could not defend as a man”.  www.spain.info/en_US

No matter where you are in Maryland you can participate in the statewide commemorative activities in honor of the 150th anniversary of the assassination of President Lincoln on April 15, 1865. The events include exhibits, films, concerts, lectures and tours. The Surratt Society is offering 12-hour bus tours that follow John Wilkes Booth’s escape route including many extant sites. Silver Spring’s National Museum of Health and Medicine will feature a month long exhibit, “Abraham Lincoln: The Final Casualty of the War.” Tours are offered of Booth’s 4-room birth home in Harford County. www.visitmaryland.org

Baltimore inaugurates “The War Came by Train: 1865-The Lincoln Funeral Train,” on April 18th-19th. Exhibits will feature a scale-model of the Lincoln Funeral Car, a Civil War locomotive and re-enactors. baltimore.org

Washington D.C.’s Crime Museum has created a new 90-minute, 2-mile, walking tour to commemorate the death of President Lincoln. “Assassinations in the Capital” will encompass sites related to both Lincoln’s and other presidential assassinations. The Crime Museum presents a history of crime through exhibits and interactive forensic workshops. Information on tours and visits to the museum are available online. crimemuseum.org