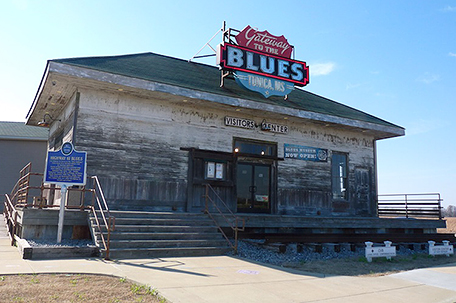 The history of the Delta — the triangular floodplain that lies between the Yazoo and Mississippi Rivers — has long been noted as containing some of America’s most fertile land.was home to Native Americans for more than 1,300 years before Columbus. The French, who were the first European settlers, began importing slaves from Africa in 1720. They attempted to grow various crops, but by the end of the 1700s, cotton was the biggest cash crop and with it the need for slaves to work the fields exploded.  (www.visitmississippi.org)

After the 1820s, the Indian treaties allowed the land to be opened to White settlers and a culture with many large-scale plantations thrived. Free Black labor facilitated the creation of America’s largest group of millionaires, such as Wade Hampton III, who owned 900 slaves and Stephen Duncan, a former Pennsylvanian, who owned more than 1,000 slaves. At the onset of the Civil War, just under 50 percent of the state’s families owned slaves and 55 percent of the residents were enslaved. Post-emancipation Delta life was redefined, but the equality Blacks hoped for did not come. African-American life and economic opportunity were still tightly controlled and civil rights were denied. By 1910, 92 percent of the Delta’s farms were run by tenants, and of that number 95 percent were Black.

The church was the one institution that sustained them and whose music soothed them. A blending of gospel, work songs and African rhythms led to the creation of a purely American art form — the Delta Blues. Music became a way out for the bluesmen of old, and as they left the Delta via the roads or rails, they took their music with them and changed history forever. (www.visitthedelta.com) 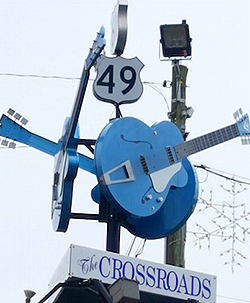 Mississippi, the “Birthplace of America’s Music”, has done an outstanding job of identifying sites significant in blues history and in the history of its allied musical genres, country, rock ‘n’ roll, rockabilly and gospel. Blues as uniquely American, has had a profound impact on music internationally and its realm of influence can be traced along the trail. Highway 61 is the spine of the route and is known as the “Blues Highway,” commemorated in story and song, taken by many bluesmen, carrying their suitcase and the blues, north.  (msbluestrail.org)

Tunica’s Gateway to the Blues Visitors Center and Museum is the perfect place to begin your tour along Highway 61. Here you can learn about all aspects of the route, as well as obtain guides, maps and unique souvenirs worthy of the trip. The museum galleries display exhibits that trace the music’s history from its origins up to the so- called “British Invasion” of the 1960s through more than 700 artifacts and artworks. The jewels of the collection are a 1952 Les Paul guitar and a coronet that belonged to W.C. Handy. The center, located at the entrance of the Delta, is situated inside an 1895 one-room train depot, reminiscent of the type the bluesmen would have known, complete with railroad tracks in front. (www.tunicatravel.com)

The Hollywood Café opened in 1969 inside a 1926 commissary building and quickly became renowned. It has been featured on The Travel Channel, in John Grisham’s “A Time to Kill” and it is where Muriel played piano in Marc Cohn’s “Walking in Memphis.” Her piano still sits on the stage. This iconic restaurant is known for its ambiance, great Southern menu and as the place where fried dill pickles were created. Dine like a legend!  (www.thehollywoodcafe.com)

Highway 61 originally ran from New Orleans to the Canadian border. The Mississippi Delta portion is known as the Blues Highway because it is along this road that numerous pivotal events occurred. Clarksdale has justifiably emerged as the most recognized of the cities on the music trail. It has the greatest number — nine in total — of blues markers of any of the cities. Seminal music figures such as Sam Cooke, and Ike Turner were born here and the Empress of the Blues, Bessie Smith, died here in 1937 in what was then Thomas Afro-American Hospital. Most significantly, at the crossroads of Highways 61 and 49, Robert Johnson is said to have sold his soul to the devil, who in turn tuned his guitar for him giving him phenomenal musical ability. (www.visitclarksdale.com)

The Delta Blues Museum, the oldest music museum in the state, was founded in 1979 to preserve and promote the legacy of the blues. The collection begins with the African origins of the blues and interprets its incarnations in the Delta and internationally. Highlights of the collection include a Three Forks sign from the place Robert Johnson was poisoned and three important displays from the life of Muddy Waters: the Stovall Plantation cabin in which he made his first recordings, a replica of the 1939 Ford Deluxe driven in 1942 through the Delta by Alan Lomax and a Muddywood guitar crafted from cypress from Muddy’s Stovall cabin. He lived in the four-room cabin with a porch from the age of 3.  (www.deltablesmuseum.org) 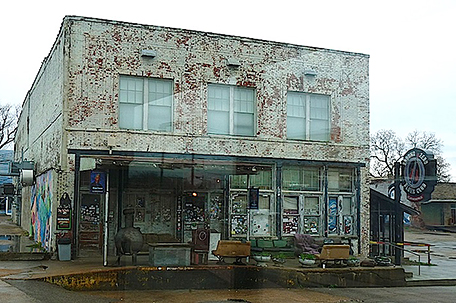 Clarksdale has the distinction of being home to the past, present and the future of the blues.  History is found on every street and visitors have the opportunity to sit in on sessions of the finest blues in two of the three top blues clubs in the nation, Ground Zero and Red’s Lounge. Morgan Freeman and Bill Luckett have designed Ground Zero to replicate a juke joint and Red’s Lounge is widely considered the last authentic juke joint.  (www.groundzerobluesclub.com)

The Lofts at the Five & Dime, situated in the heart of this blues destination, offers the perfect accommodations for your visit. The luxury lofts are on the upper level of a historic Woolworths with a restaurant on the lower level. The rooms are well appointed and the service is nonpareil. (www.fiveanddimelofts.com)

In Part Two, we continue the trail and pursue blues heritage in Meridian, Greenwood, Cleveland, Indianola and Hattiesburg. See you on 61!

An outstanding option is  a ‘Deep South and Delta Blues’ tour with Grand American Adventures tour company. Twelve days, 13 participants, five states, 4 genres of music and an introduction to the Civil Rights Movement combined with unique experiences including Graceland, Beale Street, Memphis, Nashville, New Orleans and a photo op at the Crossroads.  (www.grandamericanadventures.com)

An American Pilgrimage, the Mississippi Delta Blues Trail (part one)