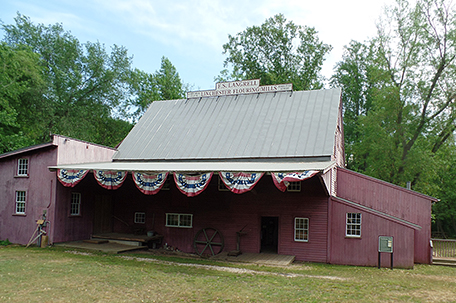 “Do right and risk the consequences.”

The Harriet Tubman Underground Byway Tour is much more than the tale of Harriet Tubman. It has been designated a “National Road” based on its historic and cultural significance and it shines a light on many of the lesser-known people who escaped and those who risked their lives and livelihood in the cause of freedom. The portion of the Byway that runs through Dorchester and Caroline Counties relates a completely unique story that is available on a CD and as a downloadable audio tour encompassing 35 sites. An accompanying Driving Tour Guide includes maps, photographs and complete historic information about each site. In 2013 President Barack Obama designated a large section of the land the Harriet Tubman Underground Railroad National Monument. harriettubmanbyway.org

The first black slaves brought into the area were from the Caribbean and were known as Atlantic creoles and as early as 1653 there were also free documented blacks.  Even with the importation of Africans by 1776 90 percent of the black population was native born. A large number of slaves were needed because the primary crop was tobacco but the soil was quickly depleted and in the 1790s it became apparent large numbers of workers were no longer necessary. As a result of the changing circumstances maritime trades and timbering became the backbone of the economy and many area residents manumitted or hired out their slaves. At the outset of the Civil War 79 percent of the blacks in Caroline County were free. The combination of few large plantations, access to information provided by the mariners, a large free black population, black and white abolitionists and the ability to move more freely and interact than slaves in other areas made this a corridor of freedom. visitmaryland.org

The Harriet Tubman Museum & Educational Center is the perfect place to begin your tour. The center is a community effort founded in the 1980s to preserve and transmit the history and legacy of Harriet Tubman and the Underground Railroad. Exhibits include a series of portraits of Tubman, a replica of a cradle made by Ben Ross and a large mural depicting scenes from her life. An orientation film and an opportunity to hear the oral testimony and discuss her legacy with local residents are highlights of a visit. The gift shop has a selection of books for all ages, educational materials and handcrafted Tubman related items. visitdorchester.org/harriet-tubman-museum-educational-center

Harriet Tubman Underground Railroad State Park and Visitor Center, a state-of-the-art facility designed to interpret the story and lasting effect of Harriet Tubman and the UGRR through displays and extensive use of the natural landscape, is to be completed in 2016. The 10,600-sq. ft. complex will feature a museum, welcome center, memorial garden, walking paths and a 2,400-sq. ft. pavilion available for rental. The center will be environmentally friendly and handicapped accessible.

It is widely believed that Araminta, “Minty,” was born in Bucktown on the Edward Brodess plantation in 1820. The farm is private property but a historic plaque is located on the site. She was one of 11 children of enslaved parents Benjamin and Harriet Ross and her owner hired her out from the age of 6. She received severe beatings and other forms of harsh punishment throughout the years of her bondage. In 1844, she married John Tubman, a free black man.

At some point in the 1840s she shed the name Araminta, a derivation of the Greek word for “defender,” and took her mother’s name, Harriet, meaning “powerful.” In 1849 she fled the region on foot and alone with only two names provided by a white abolitionist and directions to an UGRR station. She made her way to Philadelphia where she was introduced to William Still and obtained a job as a maid to finance trips to return for her family and friends.

Because there were no really large plantations in the area it was customary for several owners to hire a single overseer to monitor the slaves. It is with one of these men, Thomas Barnett, that Harriet would have one of the most important encounters in her life circa 1835. She was hired out and had been sent to the Bucktown Village Store and while there a slave, pursued by the overseer, ran inside. The overseer demanded that Minty help him in his capture and she refused. At this point Barnett picked up a 2-lb. counterweight and threw it at the slave. He missed him and hit Minty in the head, fracturing her skull. She was carried back to the plantation and placed her on a bench at the loom where she stayed for several days. Eventually she was returned to her owner because her work suffered. For the remainder of her life she would experience seizures and visions. She attributed her symptoms to God.

The Bucktown Village Store remains much as it did at the time. The shelves are stocked as they would have been and cases display artifacts. A scale and 2-lb. counterweight are on view and the floor plan is the same. The gem of the historic collection here is an authentic newspaper ad featuring a reward for Harriett Tubman. Tours are available upon request as well as bicycle, canoe and kayak rentals. 410-901-9255.

Stanley Institute is a one-room schoolhouse that was relocated to the site in 1867. It is one of Maryland’s oldest African-American schools operated by a black community and was in use until 1962. It is listed on the National Register and tours are by appointment only. A plaque on the premises tells the story of the “Stampede of Slaves,” a nearby successful escape of 28-armed slaves in 1857. 410-228-6657

Local landowners needed an effective way to transport goods and lumber to nearby ports and in 1810 slaves and black freedmen began work on Stewart’s Canal. For the next 20-years they hand-dug a 7-mile canal. Minty and her father worked in the area and it is through interactions here that she learned many of the skills she would later employ while conducting slaves to freedom.

Tubman’s father, Ben Ross, was freed in 1840 as a result of the will of his former master but the rest of the family remained enslaved. Ross was a master logger and hired himself out to area plantations. Three years when marrying John Tubman she hired herself out to Dr. Anthony Thompson and worked with her family on his 2,166-acre timber farm in Madison and Poplar Neck.

Tubman’s owner, Edward Brodess, died in 1849 and left his family deeply in debt. When Harriet learned she was about to be sold she decided to escape but John Tubman refused to join her. She did later return to lead him to freedom but found that he had remarried.

It was from Poplar Neck that Tubman launched three of her most renowned escapes, her brothers in 1854 and Josiah Bailey in 1857. Tubman’s parents lived in Poplar Neck in Caroline County and were UGRR operatives. Upon learning that they were indicated in the escape of the Dover 8 and would probably be arrested shortly, Tubman assisted their escape in June of 1857.

Eight slaves escaped from the Pritchett Meredith Farm on March 8, 1857. Their initial contact was the Rev. Samuel Green and then they moved on to Ben Ross. Ross gave them instructions to move on to Dover’s Thomas Otwell, another black UGRR conductor, trusted by Tubman. Instead of leading them further north he tricked them into entering the Dover jail in hopes of collecting the $3,000 reward. Fortunately they became suspicious and made an audacious escape to Wilmington, then Philadelphia and finally Canada. William Still recorded their story in Philadelphia. It was this escape that endangered Samuel Green and Ben and Harriet Ross.

The Jacob Jackson Home Site is a recent addition to the Tubman National Monument. Jackson was a free black who passed a coded message to the Ross family in 1854 to alert her brothers to prepare themselves for her arrival and their escape.

Quakers Jacob and Hannah Leverton’s 1814 home was an important stop on the UGRR and is likely one of the places Harriet stopped when she fled. These white abolitionists along with Daniel Hubbard, a freedman, ran the Leverton-Hubbard UGRR Network. In January 1858, the network was uncovered, mob gathered, and Arthur Leverton and Daniel Hubbard fled the area.  Leverton, and eventually his mother Hannah, settled in Indiana. Hubbard moved to Philadelphia. Jackson died of pneumonia while being sued by a slaveowner for helping his female slave escape. The house is a private residence.

Linchester Mill is situated on the boundary between Dorchester and Caroline Counties and the site has housed a mill since the 1680s. The mill complex included residences and stores for the interracial workers. Self-emancipators received assistance here and this was an important crossing point when traveling north. Tours, events and educational programs are offered. carolinehistory.org/places/linchester-mill-campus 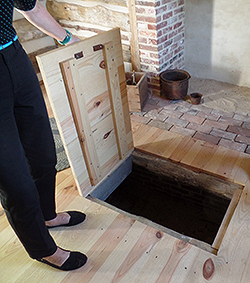 The James H. Webb Cabin is possibly the only existing pre-Civil War cabin built by an African American. James, a free man, married Mary Ann after purchasing her and her two children in 1850. He purchased the land on which the cabin sits for $200 and added to his holdings throughout the years. The hand-hewn, one-room cabin has a loft and an interior potato-hole. The hole is large and may have been used to hide fugitives. The cabin has been lovingly restored.

William Still was an UGRR stationmaster and chronicler of more than 1,000 stories of freedom seekers as they passed through Philadelphia. A marker stands at 244 South 12th Street In 1871 he published “The Underground Railroad” and preserved much of the UGRR history for posterity. The William Still Family Interpretive Center will be housed inside an 1820’s cottage and will relate the story of the Still family’s escape, the UGRR and the life of the enslaved. Opening date will be forthcoming.

Harriet Tubman’s service did not end with the onset of the Civil War but continued until her death in 1913. She served as a Union nurse in South Carolina and because of her special skills as a scout and spy. She was also the first female to lead armed troops into battle during the Civil War. For her service she was given a monthly $20 military pension. She returned to Auburn, NY after the war and married again. Her residence became the Home for Indigent and Aged Negroes. She is buried in Fort Hill Cemetery in Auburn.

While planning your journey you can enter the portal to the interactive Pathways to Freedom website and participate in an escape. pathways.thinkport.org/following

Information on every site and complete planning tools for this adventure can be found at the links provided. Tourcaroline.com and Visitdorchester.org

This June Jamestown Settlement and Yorktown Victory Center will be featuring interpretive programs that focus on 1600s-era dress. Worn by colonists, natives, sailors and soldiers. From museum exhibits to fashion shows, visitors will have an opportunity to learn about the garments from fabric and dyes to finished outfit. Information can be found at #colonialfashion and historyisfun.com.

The PECO Multicultural Series is back and Philadelphia has it! The nine-series event returned on June 1st on the Great Plaza at Penn’s Landing. These international adventures encompass all aspects of the featured cultures, cuisine, clothing, music, art and dance. The complete schedule can be found online. visitphilly.com/events/philadelphia/peco-multicultural-series-at-penns-landing

National Museum of American Jewish History will present “The Pursuit of Happiness: Jewish Voices for LGBT Rights” beginning on Tuesday, June 23, 2015. The exhibition will feature the personal stories of Jewish marchers who participated in the Annual Reminders held in front of Independence Hall on the 4th of July from 1965 until 1969. The exhibition will be on view on the museum’s first floor and admission is free. nmajh.org