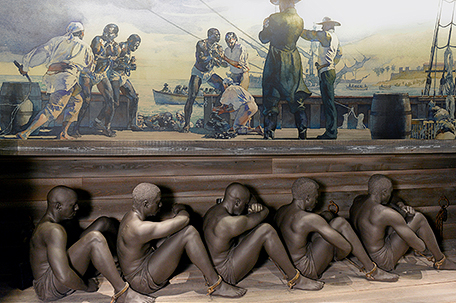 There were always black civil rights activists, Richard Allen, O. V. Cato, Sojourner Truth, Ida B. Wells, etc., but it was not until the 1950s that activism morphed into a larger, more cohesive, movement. During the 50s a nonviolent protest methodology was developed that allowed the world an unobstructed view of racism in America. The 1960s carried the crusade into new, even more dangerous territory with Dr. King in the forefront and people from all ethnicities, ages and economic circumstances actively participating. The opening volley occurred on February 1, 1960 when 4 young men staged a sit-in at the segregated counter of a Woolworth’s in Greensboro, NC.

Eight months later King participated in a sit-in in a restaurant inside Rich’s Department Store in Atlanta. He, along with others, was charged with trespassing and was to serve 4-months at hard labor. Robert Kennedy was instrumental in having him released on bail and the store desegregated in 1961.

Civil rights activists converged on Albany in November of 1961 to establish what would become the Albany Movement. The movement was the first to cast a wide net and protest all of the onerous conditions and combine the efforts of all the major protest organizations. Dr. King arrived in the city the following month and addressed a crowd at Shiloh Baptist Church so large that some attendees were seated across the street at Old Mt. Zion Baptist Church. Travelers can follow King’s path marked by bronze footsteps that lead from Shiloh Baptist to the Albany Bus Station protest site. King was again arrested on December 16, 1961 for marching without a parade permit. Dr. King left Albany on August 10, 1962.

Old Mt. Zion has been restored and is now part of the Albany Civil Rights Institute. A museum interprets the 1961-62 Albany Movement and the music of the movement. Programs are offered that include the Freedom Singers directed by Rutha Harris, an original member who performed the songs in the 1960s and has performed them at the White House. albanycivilrightsinstitute.org

Historians believe that King took the lessons of Albany to Birmingham but nothing could prepare him, or the country, for what waited there in 1963. Birmingham was considered the perfect place to confront racism because it was one of the most racist cities in the South, was home to five Klan groups, and was referred to a “Bombingham” because in 1963 alone 35 black homes and institutions were bombed. 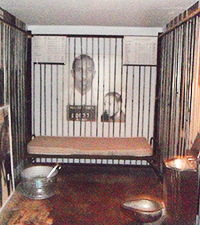 Dr. King, SNCC and the SCLC launched a systematic series of demonstrations in the city and on April 12th King was arrested for failure to obtain a permit to demonstrate. Four days later King wrote the 7,000 word “Letter from a Birmingham Jail,” his response to eight white Alabama ministers who requested in the newspaper that he wait for the legal system to end segregation in lieu of protests and demonstrations. He was released from jail on the 20th and a marker commemorates the event at 417 Sixth Ave.

In 1992 the six-block Birmingham Civil Rights District was established to honor and interpret the Civil Rights Movement and the Birmingham Campaign. Each individual area is marked making self-guided tours possible and the 4-acre Kelly Ingram Park is a good place to begin. This is the scene of those iconic images from May 2-5, 1963 of water hoses and menacing police dogs that were televised and led to the passage of the Civil Rights Act of 1964. During the course of these events King’s brother’s home was bombed.

A sculpture of Dr. King stands at the SW park entrance while the interior showcases 5 sculpted dioramas, four of which are of the violence perpetrated on the protestors. The limestone ”Kneeling Ministers” sculpture is situated at the NE entrance. nps.gov/nr/travel/civilrights

Sixteenth Street Baptist Church, scene of the bombing of 5 little girls on September 15, 1963 at 10:22 AM, is located across from the park. They were killed by dynamite under the church steps. On the exterior the girls are memorialized with a bronze plaque and tours of the church interior are regularly scheduled. Three men were convicted of the crime beginning in 1977. 16thstreetbaptist.org

King arrived in St. Augustine on May 18, 1964 to lead a nonviolent protest. He suffered his 14th arrest on June 11th on the steps of the Monson Hotel. On the 21st the owner poured muriatic acid into the pool on students attempting to desegregate it. Today the current Hilton chain has preserved the steps on which King was arrested and a marker has been placed in the pool area.

On December 10, 1964 Dr. King became the youngest recipient of the Nobel Peace Prize. It was awarded in Oslo and he donated the prize money, $54,123, to the movement. nobelprize.org

After much legal wrangling on March 20, 1965 3,000 individuals walked across the single most recognized symbol of the Civil Rights Movement, the Edmund Pettus Bridge, with Dr. King in the lead. By the time they reach Montgomery, after 5 days and 54-miles the crowd numbered over 24,000. On August 6, 1965 President Lyndon Johnson signed the Voting Rights Act. There are several museums and centers along the route that feature displays and information on the march. 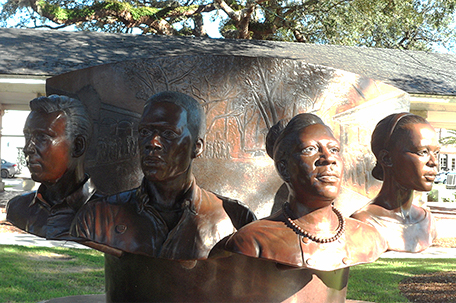 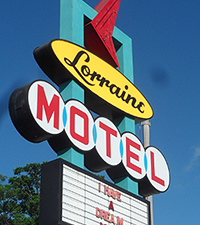 King was assassinated on the balcony outside room 306 of the Lorraine Motel on April 4, 1968. The motel is today The National Civil Rights Museum (NCRM) that relates black history from 1619 onward. There are more than 40 videos and hundreds of artifacts. The self-guided tour ends with a view of Dr. King’s room outfitted as it was the night he was killed. The boarding house from which James Earl Ray reportedly shot King is now the Legacy Museum and entrance is gained through a tunnel with a timeline. On the 2nd-floor there is a replica of Ray’s room and his white Mustang. civilrightsmuseum.org

In 2011 the Martin Luther King, Jr. Memorial was dedicated on the National Mall in West Potomac Park, 48-years after the March on Washington and Dr. King’s greatest speech. A 450-ft. granite inscription wall, hand-carved with his quotations, surrounds a 30-ft. sculpture of a King placed between the Lincoln and Jefferson Memorials. It is the first memorial on the mall dedicated to an African American and an individual who was not a president.

Celebrate Chinese New Year, the Year of the Monkey, at the Penn Museum on January 30, 2016. 11 AM- 4 PM. penn.museum/calendar/eventdetail/172/chinese-new-year-celebration