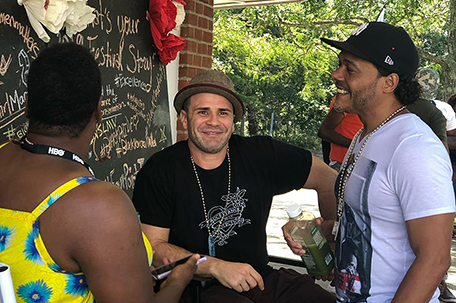 ABOVE PHOTO: From left to right: Filmmakers Gabriel and Javier from the short film “Wonder.”

While there were many films to watch over a period of days for the African American Film Festival, here are a few that stood out for the audiences.

Twenty four year old graduate student Raeshon Morris joined the filmmakers with his short from USC called “The Influencers.”It is about the way people often use the internet and how creative they can be. While he thought this was a long shot in a place where he would meet more seasoned professionals, Morris not only won the audience award, he won the hearts of many locals who wrapped him into their villages so that he could fully enjoy his first experience at the Martha’s Vineyard African American Film Festival.

“Wonder” was created by three people from Puerto Rico after one of them, Gabriel Furman, was on vacation and saw a little boy walking with his father in a Wonder Woman costume.  The father was holding his son’s hands, and it struck Furman in the moment that it was a powerful visual given how much we judge others by societal norms. He then wondered, “what would happen if we just allowed others to be in their most natural and authentic states? What then would we be like with each other?”

Furman and co-director Javier Molina went on a mission to find out with their short movie, and won the coveted HBO film award for their efforts. I suspect we will see much more of them in the near future.

“King Esther” was based on a transgender woman fighting to find a place of normalcy in the Louisiana town she lived in and with her family. While her mother seemed to have accepted her on some level, her youngest brother — who  is a pastor — had serious issues which caused a rift. The entire film was centered not around being transgender, but how difficult it was to live authentically in her community and the serious health and physical challenges she faced as a result.