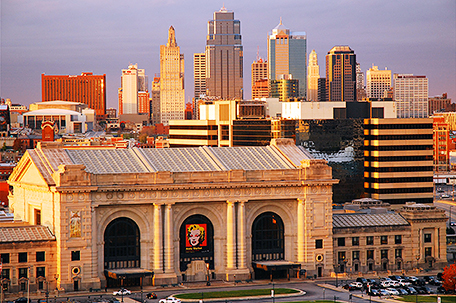 ABOVE PHOTO:  The skyline of Kansas City Missouri rises from behind historic Union Station.  (shutterstock)

St. Louis’ hospitality industry says it’s starting to see lost business that’s perhaps tied to the NAACP’s travel warning to would-be visitors to Missouri. The warning, issued last month as the civil rights organization’s first-ever such advisory, largely hinges on the group’s concerns about a state law that soon will roll back discrimination protections for workers.

The NAACP also cites reports that African-Americans are more likely than whites to be stopped by Missouri law enforcement officers, as well as other current and past issues of racial conflict in the state. The NAACP is staging “truth rallies’’ around the state this week to explain the travel warning.

Here’s a look at the issue:

Legislation, signed into law in June by Republican Gov. Eric Greitens and taking effect Aug. 28, will make it tougher to prove workplace and housing discrimination in court. People suing for discrimination will be required to demonstrate that a protected class such as race, gender, age or ability was the “motivating factor’’ for disciplinary action from an employer. Under current law, employees must only prove their protected class contributed to an employer’s decision to fire, discipline or refuse to hire them. The new law also caps the amount of damages an employer must pay based on the company’s size and bars people from suing some individuals, such as a supervisor, for discrimination.

REACTION TO THE LAW

Groups including the Missouri Chamber of Commerce and Industry and some GOP lawmakers say the law change is necessary to reduce “frivolous lawsuits’’ that have made doing business in the state too difficult. Other lawmakers and the NAACP decry the move, arguing the measure removes worker protections and makes it nearly impossible to prove workplace discrimination and harassment in court.

The travel advisory, which warns Missouri residents and visitors of “looming danger,’’ was put in place on a statewide level in June and then adopted by the NAACP’s national delegates last month. The organization cited the new law in issuing the warning. It also noted a Missouri attorney general’s report showing that black Missouri drivers last year were 75 percent more likely than whites to be stopped by police. Missouri also has drawn unwelcomed global attention for racial acrimony in recent years,  from lingering unrest over the 2014 police shooting death of 18-year-old Michael Brown in Ferguson to protests in 2015 on the University of Missouri’s Columbia campus over what activists saw as administrators’ indifference to racial issues.

THE ADVISORY’S EFFECT ON TOURISM

The president of the tourism-minded Explore St. Louis board says the NAACP advisory has led to some meetings being scrapped at local hotels. Kitty Ratcliffe wouldn’t specify which hotels were affected or the number of meetings canceled. Explore St. Louis says on its website that the local hospitality industry has about 85,000 workers and that the city welcomes nearly 26 million visitors for leisure, conventions, meetings and business travel each year, with the guests spending roughly $5.4 billion.

A spokesman for Visit KC says Kansas City, Missouri, has not lost any business due to the ban “to our knowledge.’’ Mayor Sly James wrote in a recent blog posting that in the coming 18 months, the city expects to host more than 200 conventions welcoming more than 430,000 visitors.

REACTION TO THE ADVISORY

Gov. Greitens, who took office in January, has not commented publicly about the travel advisory. And while Missouri NAACP President Rod Chapel has said he hopes the action boosts awareness, there was disagreement even within the state’s NAACP about the warning’s merits, at least for a time.

St. Louis County NAACP President Esther Haywood initially said that while her chapter doesn’t support the new law, members worried the advisory could harm minorities employed in the hospitality industry and “who have played no role in this legislation.’’ She later backtracked and threw her support behind the warning, insisting the legislation’s sponsors used deception and “have taken away our protections from unlawful and immoral discrimination. Just how far back in time are they planning to take us?’’

Jerry Hunter, a St. Louis attorney who once headed the Missouri Department of Labor, says the travel advisory is a publicity ploy by the NAACP. Hunter, who is black, says it stands to harm African-Americans making a living in the state’s hospitality industry.

HOW HAVE SITUATIONS INVOLVING LEGISLATION IN OTHER STATES PLAYED OUT?

After North Carolina last year adopted a “bathroom bill’’ requiring transgender people to use public restrooms corresponding to the gender on their birth certificates, a national uproar and costly boycotts of that state spurred lawmakers there to roll back much of that measure in March. The new measure says that only state lawmakers,  not local governments or school officials,  can make rules for public restrooms.