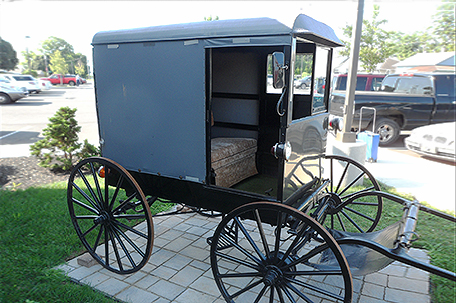 “But the Wickedness cannot be covered, the Guilt will lie on the whole Land, till Justice is done on the Murderers. The Blood of the Innocent will cry to heaven for Vengeance.”

–B. Franklin on the Paxton Boys’ Massacre

Lancaster County is located a mere 60 miles west of Philadelphia amidst acres of rolling hills and lush farmland. The area is rich with a history that does not need to be recreated because much of the land and the culture of the people has remained unchanged for more than 200 years. The county is internationally recognized for its Amish and Mennonite population, but the destination also offers numerous dining options, historic sites, and an extensive variety of accommodations, unique attractions and family oriented activities. www.padutchcountry.com

Native Americans occupied the land long before William Penn took possession of the colony when the majority of the tribes were part of the Iroquois Nation. Penn granted by treaty the Conestoga tribe 16,000-acres of land in 1701. By the 1730s immigrants had begun to encroach on their land and the settlements used up the resources until the natives were starving and their numbers were dwindling.

On December 14, 1763, the Paxton Boys, an armed mob of Scot-Irish Presbyterians raided the Conestoga settlement killing six. The remaining 14 Conestoga were placed in protective custody in Lancaster. On December 27th, they attacked the Lancaster jail and killed and mutilated the last 14 tribe members.  No one in Lancaster intervened and no one was ever brought to trial for participation in the Conestoga Massacre. Thirty Native Americans and Mennonite, Presbyterian and Quaker representatives met at the Lancaster First Presbyterian Church on October 9, 2011. The Native American leaders accepted a public apology for 300 years of abuse and neglect. Regional government officials and Lancaster residents were also in attendance.

The city of Lancaster is one of the earliest inland settlements in the country. The area was part of Penn’s 1681 land grant and 10 years later the first land deed was listed. The first settler was documented in 1721 when George Gibson established the Hickory Tree Tavern. Nine years later, James Hamilton laid out the town and sold lots. Purchasers had two years to construct a house, at least 16-ft. square, with a brick chimney.

The Pennsylvania Dutch entered the region in the1720s. The “Dutch” is not derived from the Netherlands but rather from the Germans or “Deutsch.” Their roots extend back to the European Anabaptist movement in the 15th-century. Both the Amish and Mennonites originated within the Anabaptists and today the Amish community in PA is both the oldest and most extensive in the country.

My best tip for visiting Lancaster County is to always take the long way. The roads wind and meander and around every corner there are breathtaking views of farms that seem to stretch endlessly. You share the road with buggies on their way to market and children walking along or on bikes or two wheeled scooters. Visitors are allowed to step into an authentic pastoral setting and experience a peek into the Amish and Mennonite cultures at the numerous farms and cultural venues that immerse you into their lifestyle. I suggest that you visit those sites but also take time to explore the lesser-known and more unusual attractions.

Once there were 12 mills within a 12-mile area around Ronks, Pennsylvania. Mascot Roller Mills is the last one remaining. The mill and the Ressler Family Home are wonderfully preserved mid-19th century structures, offer free guided tours and interpret the unique story of the miller’s family. The site is located on the incredibly scenic Rte. 772, a main thoroughfare for the largely Amish and Mennonite community. www.resslermill.com

The first settlement in the area was circa 1728 and a two story mill was constructed in 1760. The mill and 1855 miller’s house were purchased by William Ressler in 1864 and was owned and operated by the family until 1977. Tours begin in the mill with a 5-minute orientation film entitled “Franklin Ressler.” Franklin, the last miller, took over as miller in 1934. The only time he left the area was during his service in WWII at which time he emptied the mill and closed it until he returned. Franklin was one of eight children, none of which left offspring. When the mill closed the remaining siblings established a foundation to maintain it and to cover public entrance fees.

The 3.5-story mill grew over the years and architecturally reflects the additions. The 37-ft. long original walnut beams can be seen on the main floor. A request was made to John Wanamaker, then Postmaster General, and a post office was established inside the mill. It became a community center and Jacob’s wife Annie named the community and the mill Mascot after a dog that was in a show she saw while in New York on her honeymoon. Visitors view milling demonstrations and learn the intricacies of the process.

Immediately adjacent to the mill is the miller’s house. This 19th-century, four story, house remains perfectly preserved and is furnished just as it was when the last members of the family left, including paperwork in the desk drawers and soap in the bathroom. Many of the furnishings pre-date the Civil War. The house was built of local brick painted a colorful red. There are two entry doors, typical of German architecture, one for family and one for guests.

The family kitchen is on the lower level and visitors should take note of a telephone on the exterior. The Resslers were the first family in the area to have telephone service so they had it placed under the eaves outside so neighbors would have access.  They wrote into the foundation rules that there must always be a working telephone outside of the home. An outbuilding features a small museum filled with family heirlooms and artifacts.

The Robert Fulton Birthplace is located in what was, at the time of his birth, Little Britain Township. He lived there during his formative years in a stone farmhouse on 350-acres. Fulton was born in 1765 and, upon the death of his father, helped support the family by painting tavern signs. In 1783 he moved to Philadelphia, painted portraits and studied under Benjamin West.

When West moved to London, Fulton followed and it was there that his genius as an inventor and innovator came to the fore. He attempted to interest the English in a “plunging boat,” a predecessor of the submarine. When they proved disinterested he took his idea to France. They allowed a test of his boat, the “Nautilus,” at Rouen, France but the performance proved disappointing.

Fulton did not invent the steamboat but he did adapt it for practical use. He and a partner obtained a contract for the exclusive rights to steamboat service on the Hudson River. On August 17, 1807, the steamboat Clermont made its maiden voyage from New York City to Albany traveling 5-mph, completing the journey in 32 hours. Fulton died at the age of 49 of pneumonia.

The birthplace was restored in the 1970s and offers 30-minute guided tours. The home is furnished in reproductions and one room is filled with interpretive panels that include examples of his artworks and technical drawings.

The original Sight and Sound Theater draws visitors from all over the world for its immersive, musical, biblical productions. It has been named one of the nation’s top three theater destinations.  Sight and Sound was the brainchild of Glenn Eshelman, who began by presenting a series of slides, with recorded music, to organizations. The Sight & Sound Auditorium opened in 1976 with the first full, live production, debuting in 1987. In 1991 Sight and Sound Theater opened but was destroyed by fire six years later. The current 2,000-seat theater opened in 1998.

“Moses,” the current production, makes use of all 300-ft. of center stage as well as portions of the side stages that literally envelope the audience in the action. The production employs live animals, colorful costumes and creative set design to bring the epic story of Moses to life. The musical is 2.5-hours long, is fully accessible and provides free parking. You can see clips from the show and purchase tickets online. www.sight-sound.com

Dutch Wonderland opened in 1963 on four acres with four rides and today is a 43-acre family park with more than 30 rides, 24 eateries, shows, games, character breakfasts and attractions. This year Exploration Island opened with a children’s fossil dig site and 20 animatronic dinosaurs. Visitors can walk along the Prehistoric Path, get up close and personal with the dinosaurs, take photos and learn all about them from informational signs. You can also take a Gondola Cruise and view the reptiles from the water. www.dutchwonderland.com

The Third Annual Lancaster County Museum Month will take place during the entire month of September. Touring the county is always affordable and fun but participating in the unique activities scheduled to help you “Discover the Corners of the County” adds another level of adventure. Guests can take part in games, contests and scavenger hunts. Prizes will be awarded. Details are available online. www.lancastercountymuseums.org

Good ‘N Plenty Restaurant began as a working Amish farm. It was purchased in 1969 and a family-style dining establishment was added in 1971. Good ‘N Plenty has always been ahead of the curve because all of their meals are served from farm to table and all the recipes are authentic and can be traced back to traditional Pennsylvania Dutch or family members. The restaurant’s original section now offers individuals and families the option to order from a menu. www.goodnplenty.com

Lancaster County is filled with a variety of accommodations from campgrounds to deluxe suites. Ideally suited for a trip throughout the county is the Best Western Plus Intercourse Village Inn. The inn was constructed on the site of a former flourmill. A $7-million renovation was completed in January 2014 that manages to incorporate all the modern amenities while maintaining the aura of the regional heritage. There are 89 rooms, a fitness center and Serenity Day Spa. An adjacent building houses an indoor pool and hot tub. The inn’s 1899 Olde Mill Restaurant is open six days a week and serves traditional home cooked meals with farm fresh ingredients. It is a local favorite. www.amishcountryinns.com/best-western

You won’t believe how much there is to do in Lancaster County. People visit from across the globe but all this adventure awaits us only an hour away.

Shenandoah County: the “Daughter of the Stars”