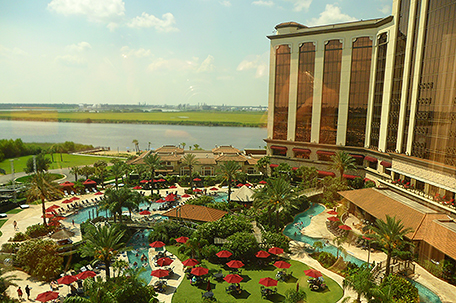 “Oh the moonlight on the bayou, a creole tune that fills the air, I dream about Magnolias in bloom and I’m wishin’ I was there.”

Lake Charles is the gateway to Louisiana’s most culturally diverse region. It is a city where every aspect of daily life is infused with and influenced by the rich multi-ethnic heritage that makes this area so vibrant and unique. Southwest Louisiana offers the best of Southern hospitality to visitors with their own special twist on dining, dancing, outdoor activities, historic sites and festivals. The state of Louisiana presents more than 400 festivals annually and Lake Charles alone hosts more than 50, earning it the moniker, “The Festival Capital of Louisiana.”

A Black Heritage Festival has been held the second week of March for more than 25-years. The festival focuses on the culture, arts and influence of this hybrid society. Musical entertainment is presented on several stages and local and regional foods and handicrafts are featured. Festival profits support the local community.  www.bhflc.org

Contraband Days Festival celebrates the area’s pirate heritage.  Jean Lafitte’s legacy lingers and during the first two weeks of May pirates rule. They capture the mayor and make him walk the plank and party as they did in days of old. The next festival will be the 58th. www.contrabanddays.com

Lake Charles hosts the second largest Mardi Gras in Louisiana and it is one of the top 100 events in the country. Mardi Gras season runs from Twelfth Night, January 6, to Fat Tuesday, the day before Ash Wednesday. Events take place throughout the season with a culminating parade with more than 6o krewes and 80 floats. Many of Lake Charles’ events are held in the Civic Center and are open to the public. You can stay abreast of activities by downloading the free Southwest Louisiana Mardi Gras app or going to the website. www.swlamardigras.com

The major Native American group in Southwest Louisiana when Cabeza de Vaca passed through the area in the 1500s was the nomadic Attakapas. Lake Charles’ county owes its name, Calcasieu, to them. Legend has it that it was the name of one of their most important chiefs, “Crying Eagle.” Jose de Evia, who explored the region in depth, followed Cabeza de Vaca more than 200 years later.

One of the most important sites in the United States is located within driving distance of Lake Charles. Poverty Point, on Bayou Macon, was inscribed in the list of UNESCO World Heritage Sites on June 22, 2014. The large site received its name from a plantation that had been established there by the Motely family and not any of its indigenous inhabitants. The Guiers, subsequent owners, named the plantation Poverty Point in 1851. www.whc.unesco.org/en/list/1435

This mound complex is the largest built by hunter-gatherers on the continent, it covers approximately 400 acres and is dated as early as 3700 B.C. It is theorized that the mammoth settlement was a trading center. Within its confines on the bluff are six rings and six semi-elliptical mounds, facing the bayou, with a 37-acre plaza at the center. Bird Mound, believed to be in the shape of a large soaring bird, is 72 ft. tall and is the second largest on the continent. Tram tours are offered. www.nps.gov/popo/index

Martin Le Bleu is considered the area’s first nonindigenous settler. He arrived around 1781 and erected a log cabin near present day Lake Charles. Le Bleu was French and the second settler, Charles Sallier, was born in Spain. He erected a 20 ft. square cabin within what is now the city limits.

The region was considered remote because of no inland thoroughfares and the settlement grew slowly and for those reasons during the early 1800s the famous pirate Jean Lafitte plied the waters around Bayou Quelqueshue, now known as the Calcasieu River. Lafitte would sail into the hidden recesses of the waterways and unload his cargo of captured slaves and illegal booty and, some say, bury his treasure.

Southwest Louisiana was solidly behind the South during the Civil War and it provided both men and supplies to the cause. Daniel Goos, a sawmill owner who had established a fleet of ships to carry his lumber because of a lack of roads to transit points, converted his schooners into blockade runners after the Union’s plan to blockade Mobile, Alabama and New Orleans, code name Anaconda, began to take effect.

After the war members of the rural settlement, called Charlestown, met in 1867 to rename it. The name they chose was Lake Charles and it was incorporated as a city. It was the parish seat and the government offices were housed there.

The neo-classical historic Calcasieu Parish Courthouse was constructed in 1912 after a devastating fire destroyed the previous one in 1910.  The marble structure is notable for its Roman portico, massive exterior columns and green copper dome. It is listed on the National Register of Historic Places (NRHP).

The courthouse is believed to be haunted by the ghost of Annie McQuiston Henry, the only woman the state ever executed. She was electrocuted in 1942 for murder and her body was buried in Orange Grove Cemetery, evidently her spirit was not. The haunting has been featured on the Travel Channel.

One year prior to the construction of the courthouse a red-tiled, Italianate-revival City Hall was built. It functioned as a government building for 90 years before it became the Historic City Hall Arts & Cultural Center. There are three floors of exhibits of local and regional art. Before entering the center visitors should take note of the belfry tower with working clocks. This building is also listed on the NRHP.

Lake Charles has six historic district tours designed to showcase the history and architecture of the city. My personal favorite is the Charpentier Historic District. It was listed on the NRHP in 1990 and encompasses more than 30 blocks of structures built by local carpenter architects who are responsible for creating the city’s unique architecture.

Shell Beach Drive is another district that is not to be missed. This tour showcases the Southern mansions that line the lakeshore. The drive begins on Clarence Street and winds its way to the Port of Lake Charles. There are many architectural styles dating from the 1800s to new construction. During the Christmas holiday and Mardi Gras season the homes are decorated to inspire holiday awe in onlookers.

The Central School Arts and Humanities Center is an absolute must visit to rapidly immerse yourself in the culture of the Lake Charles region. The school, built in 1912, originally functioned as a school, and in the 1980s it was used as an arts center. It closed in 1992 and reopened after being remodeled the following year.  Two of its major tenants are the Black Heritage Gallery and the Mardi Gras Museum of Imperial Calcasieu. www.artsandhumanitiesswla.org

The Black Heritage Gallery has been designated a site on the Louisiana African-American Heritage Trail. The gallery features local, regional and national artworks and programming that recounts the African American experience in Southwestern Louisiana.

At the opposite end of the building is the world’s largest display of Mardi Gras costumes. The museum is not large by most standards but it manages to relate the history of the festival, the traditions that surround it and showcase the glitzy costumes.  These goals are accomplished through artifacts, memorabilia, animatronic figures and photographs displayed in a series of galleries. Highlights of a tour include a recreated costume workshop and a float that visitors can mount for a photo op. www.swlamardigras.com/year-round/mardi-gras-museum.cfm

Several historic cemeteries are located within the city and a number of local legends are connected with them and many are said to be haunted. It is not unusual for people to report seeing  “feu-follet,” ghost lights, late at night. These lights represent the spirits of the dead guiding and welcoming the newly departed, a spiritual equivalent to Motel 6.

Bilbo is the oldest extant cemetery. Its first internments date from the early 1800s.  There are more than 200 graves and the notable 23 ft. Millennium Statue of Christ.

Lake Charles is one of the most urban cities situated on the Creole Nature Trail, one of America’s All-American Roads. The trail is 180-miles long with the vast majority of it running through Louisiana’s outback and encompassing wildlife refuges, nature preserves and 26 miles of natural gulf beaches. www.creolenaturetrail.org

Pat’s of Henderson Louisiana Seafood & Steakhouse is an award-winning Cajun-Creole restaurant using fresh ingredients to create traditional cuisine. The atmosphere is casual and the food is exceptional. Specialties of the house are the seafood dishes and the gumbo. www.patsofhenderson.com

L’Auberge Casino Resort is a wonderful location from which to tour the area. It allows you to choose the level of activity that best suits you or you can opt to never leave the property and take advantage of all that it offers. The 26 story hotel has 1,000 accommodations and resort amenities include a full service spa, Contraband Bayou 18 hole Golf Course, pool, lazy river and luxury shopping. The 70,000-sq. ft. casino has entertainment, table games, poker room and slots.

Philadelphia’s American Helicopter Museum will host RotorFest 2014 on October 11th and 12th. The family-oriented event will feature air shows, flight demonstrations, amusements, vendors and helicopter rides. Visitors will also have an opportunity to view the permanent exhibit, “Cradle of Rotary Wing Aviation” inside the 20,000-sq. ft. museum as well as climb aboard some of the 70 helicopters on display. Rotorfest is the only annual all helicopter show in the nation. 1220 American Boulevard. www.americanhelicopter.museum

The Princeton University Art Museum will mount “Kongo across the Waters,” from October 25, 2014 through January 25, 2015. This groundbreaking exhibition will feature 100 artworks from the Kongo, West Central Africa, and African American art. A number of the masterpieces are on loan from the outstanding collection of the Royal Museum for Central Africa in Tervuren, Belgium. Approximately 25 percent of the first Africans to reach American shores were from the Kongo and their influence on American culture cannot be overstated. Admission is free. www.artmuseum.princeton.edu/art/exhibitions/1619

The 2014 Liberty Medal Ceremony will be held at the National Constitution Center on Tuesday, October 21, 2014 at 7 PM. This year’s honoree is 17-year-old Malala Yousafzai, recipient of Pakistan’s National Youth Peace Prize in 2011 for her advocacy of civil and human rights. In October of the following year, in a failed assassination plot, the Taliban shot her in the head because of her stance on universal access to education. Yousafzai is the youngest individual every nominated for a Nobel Peace Prize. Two free tickets to the ceremony will be available to the general public at 10 AM on the 23rd by reserving them via telephone, 888-282-9499, or visiting www.constitutionenter.org

Sometimes it is not possible to travel or you want to preview a destination and most people tend to turn to the Internet. Washington’s Smithsonian Museum has created an awesome website that offers a 360 degree view of some of the exhibition galleries, allows you to navigate from room to room and even zoom in on individual exhibits. You will love this. www.mnh.si.edu/vtp/1-desktop

On Friday, September 26th Brownsville, Tennesse will officially become the permanent home of the Tina Turner Museum at Flagg Grove School. The museum is situated on the grounds of the West Tennessee Delta Heritage Center inside the Flagg Grove School Tina attended as a child. The museum has the approval and support of Turner and included among its displays are many items never before seen by the public. Tickets are available online for Tina Turner Heritage Days, September 26-28. www.TinaTurnerHeritageDays.com