Kinderdijk windmills a must-see on any trip to Holland 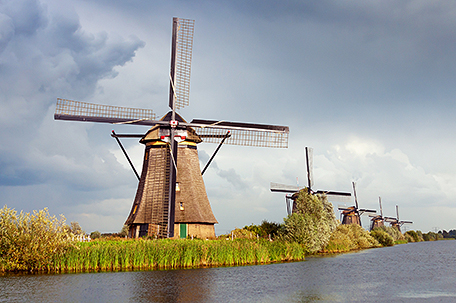 KINDERDIJK, Netherlands –The windmills at Kinderdijk were built in the mid-1700s as a way to clear water from the low-lying landscape of the western Netherlands.

Sometime in the 1950s, the millers and water board members started seeing visitors in sneakers carrying cameras.

The Dutch embraced the visitors and the Kinderdijk windmills have since become one of the country’s most popular tourist destinations while continuing to help manage the Netherlands’ ongoing fight to stay above water.

There are some windmills north of Amsterdam that “were built for the tourists, but we’re a historical site where tourists come, so it’s the other way around,’’ said Kinderdijk communications manager Peter Paul Klapwijk. “Tourism is a means to uphold our site.’’

Kinderdijk, which translates to “children’s dike,” lies in the Alblasserwaard polder (land that’s been reclaimed from the sea, marshes or river floodplains) at the confluence of the Lek and Noord rivers. The village is in the western portion of the Netherlands, much of which is near or even below sea level.

The lowlands have been prone to flooding through the ages despite the building of canals and dikes, including the 1421 Saint Elisabeth’s flood that killed thousands after the dikes broke in several places.

To stem the flooding, the Kinderdijk windmills were built in 1738 and 1740,  two earlier than that,  to move water from the lower areas to higher spots and into the river. 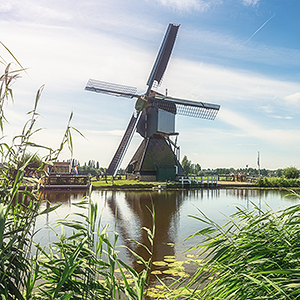 Nineteen of the original 20 Kinderdijk windmills remain and were named a UNESCO World Heritage site in 1997.

And what a sight they are.

Lining the canals that zigzag between the two rivers, the windmills are a striking and iconic glimpse into Dutch history with a modern-day functionality.

The windmills work in conjunction with pumping stations to move water from the lower-lying areas to higher ground and into the river. Of the 19 mills, 16 still have millers who live inside and maneuver the massive sails in the wind.

For tourists, walkways lead from the visitor center to the mills and boat tours are offered along the canals. Two mills serve as museums, filled with vintage millers’ items and photos with ladders to climb through and see the inner works. The mills also are functional, so be prepared to feel the entire building shake when the sails are whipping around in the wind.

About 500,000 people visit the Kinderdijk windmills each year, about 300,000 of buying tickets to take the tours.

Kinderdijk has plans to build a new visitor’s center and to refurbish the pumping station with an exhibition about the future of water management with climate change.

KINDERDIJK WINDMILLS: https://www.kinderdijk.com/discover/the-story/unesco-world-heritage. Most people visit April to September, but winter, if you can handle the cold, offers a chance to ice skate past the windmills on frozen canals. Tickets: 6.50 euros for a short film and access to the mills. Boat tours also available.

GETTING THERE: Rotterdam is about a 30-minute drive (or 25 minutes on a water bus) and Amsterdam is roughly an hour’s drive.

LODGING: The Fletcher Hotel-Restaurant De Witte Brug in nearby Lekkerkerk is reasonably priced, or there are plenty of other options in Rotterdam.