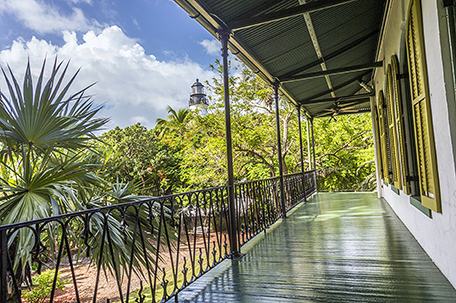 ABOVE PHOTO:  The porch on the side of Ernest Hemingway’s house in Key West, USA.   (Photo:  travelview / Shutterstock.com)

Key West, Florida — which is 4.5-miles long and 1-mile wide — is a walkable, welcoming, microcosm of the ebb and flow of American history from the time of the Calusa Indians.

Visitors can craft unique itineraries focusing on outdoor activities, unique people, events and  architecture, as well as  industrial, maritime, African-American and Civil War history. Because of its size, it is possible to tour Key West’s highlights in a day or plan a more in-depth journey into selected topics over a longer period of time. Advance planning is the key to optimizing your time and pleasure. (www.keywestvisitorscenter.com)

Key West is the most well known of the Keys, which are the remains of coral reefs and sandbars. It is the southernmost city in the continental US, and was once known as “Cayo Hueso”( Bone Island) by the Spanish because it was a burial site. They were called “keys” from the Spanish word “cayos” meaning small islands. In 1521, the explorer Ponce de Leon became the first European in the region.  In 1812, the islands were taken over by the US and in 1822 the first permanent settlement was established.

Although it is possible to walk the island, I strongly suggest you take a narrated riding tour first. The two best island tours are the 13-stop Old Town Trolley Tour of Key West (www.trolleytours.com) and the four-stop Conch Tour Train (www.conchtourtrain.com). Both tours allow you to hop on and off at the important locations. and I found the trolley tour offered comprehensive general history and the conch tour added an overview of the architectural history. Visitors can take both tours and will not be disappointed. (#keywestattractionsassociation)

President Harry S. Truman spent 175 days here in 1946. He spent winters here because of his health. In 1948 it was from here that he issued his fifth Civil Rights Executive Order. Deemed the “Little White House,” several presidents have spent time here. The 1890 house was restored in 1948. Tours of the Truman Annex are offered daily.  (www.trumanlittlewhitehouse.com) 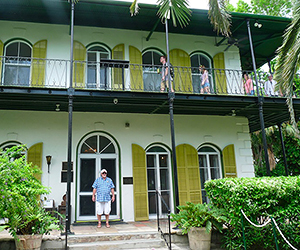 Ernest Hemingway made his home here from 1931-39 with his second wife.

The 1851 Spanish colonial Hemingway House and Museum may be toured, as well as the pool his wife had built while he was away and his adjacent study. 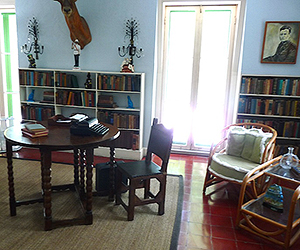 The complex is filled with original furnishings and more than 50 cats, many six-toed descendants of his original cat. (www.hemingwayhome.com)

Hemingway Days, which will be held this year from July 17-22, celebrate the legacy of writer Ernest Hemingway with a series of activities and events. Complete event information is available online.  (www.hemingwaydays.net)

Records from the 1600s indicate that salvaging items from ships wrecked on the reefs — known as “wrecking” — was lucrative for residents of the Keys. Natives were employed by the Spanish to assist in the efforts of salvaging cargo and crew, payment was expected and items were often recycled by residents. Some wreckers functioned just this side of piracy by luring ships onto the reefs with misplaced lights, false markers and other means.

On July 4, 1823, the first Florida legislation was passed to stabilize the industry, followed by federal legislation in 1825.

The Mel Fisher Maritime Museum delves into the history of wrecking with an emphasis on Fisher’s successful treasure hunts, his location in 1980 of the Santa Margarita valued at $20-million and his 1985 recovery of the 1622 wreck of the Nuestra Señora de Atocha containing a $450-million treasure. Objects from these shipwrecks are displayed in the museum.  (www.melfisher.com)

A visit to the museum is an absolute must. In addition to the 1622 Fleet Exhibit, the museum features the Henrietta Marie slave ship exhibition entitled, “A Slave Ship Speaks: The Wreck of the Henrietta Marie.” The British slave ship sank off Florida’s shore in 1700. The importance of this recovery cannot be overstated. It contained the largest number of surviving objects from the early slave trade. Items from the ship are exhibited.  (www.melfisher.org) 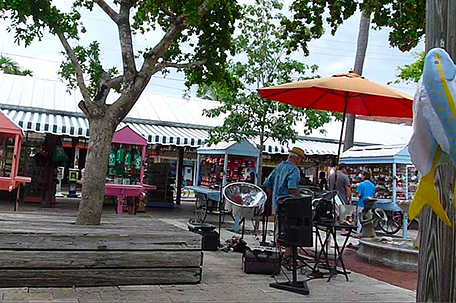 The African Cemetery at Higgs Beach is an historic location based on one of the museum’s ongoing projects. In 1860, the U.S. Navy intercepted 3 illegal slave ships — the Bogota, the Wildfire and the William — carrying 1,432 Africans near Cuba and transported them to the closet American port, Key West. While they waited for the government to act, the Africans were fed and clothed by the residents. A barracks surrounded by a fence was built to house and protect them from being kidnapped and sold into slavery.

Eventually many were repatriated in Liberia, but nearly 300 who died are buried on Higgs Beach, on the National Register of Historic Places. An area on the beach displays a group of pedestals with bronze plaques carved with African symbols. (www.africanburialgroundathiggsbeach.org)

From the beginning, the city had Black residents and was always a sanctuary for fleeing slaves. African-American history is woven into the fabric of the city and includes six early churches, including the Cornish Memorial African Methodist Episcopal Zion Church. The church was founded in 1864 by Sandy Cornish, a former slave who was one of the city’s wealthiest residents when she died.

You can’t leave Key West without visiting two of the most iconic eateries — Sloppy Joe’s Bar and Pepe’s Cafe. Pepe’s, established in 1909, is the oldest eatery and was one of President Truman’s favorites. This is a perfect place for Key West’s signature key lime pie.  (www.pepeskeywest.com) 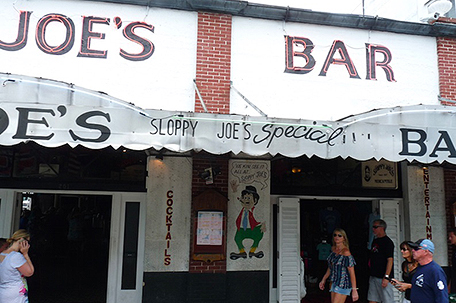 Sloppy Joe’s Bar was established the day prohibition ended in 1933 as Russel’s. It would undergo two name changes and a change of location. Hemingway encouraged the name change to Sloppy Joe’s. Big Skinner, the 300-pound bartender, reigned for more than 20-years.(www.sloppyjoes.com)

Mallory Square, the heart of the city, is a great place to end your day with a visit to the Key West Sunset Celebration complete with food and entertainment. (www.fla-keys.com/keywest)

Smooth Traveler Where the West gets real — McAllen, Texas