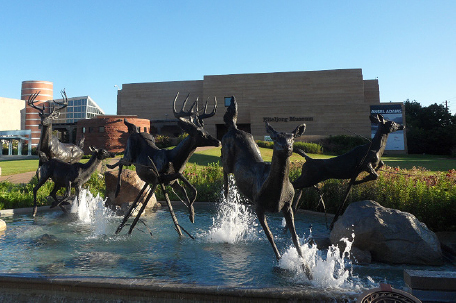 “Experience, travel, these are as education in themselves.”  –Euripides

Indiana became the 19th state in the Union in 1816 and at that time Congress reserved four parcels of public land as potential sites for a state capital. Four years later, 10 commissioners were mandated to select a location that was in the center of the state. The first white settlers in what is now Indianapolis were John McCormick and George Pogue. The McCormick cabin was situated on the east bank of the White River at the exact center of the state. McCormick’s Rock indicates the location of the founding of the city. www.visitindy.com

Indy is situated along the shores of the White River. Early on that hampered the city’s growth because it is not navigable. The Central Canal began construction in 1836 to solve the problem but the project went bankrupt and only eight miles of the planned 296 miles were completed. In 1847, the first railroad line arrived, soon to be followed by others, and by the onset of the Civil War Indianapolis was an important provisioning center. www.indcanal.org

Today, the Historic Central Canal & White River State Park Cultural District is the city’s most recognized of its six cultural districts. The canal runs from the White River to 11th Street on a three mile loop. Visitors can stroll, jog or bike along the paved trail as well as experience the trail on a rental from Wheel Fun Rentals or on a guided ride with Segway Tours of Indiana. www.segwayofindiana.com

One of the best ways to obtain unique views of Indy is from an authentic gondola on the 1.5-mile Central Canal. Old World Gondoliers provide the idyllic gondola experience including singing, striped shirt and red sashes and informative patter. www.4gondola.com

The paved Wapahani Trail is located at the northern end of the Central Canal Towpath and links it with downtown’s Canal Walk. This 27-mile path was named for the Delaware Indian’s name for the White River. At its southern end it links with four other scenic trails and numerous sites. One significant site is the Major Taylor Velodrome, a bicycle track named after Indiana-born Taylor, the first African American world class cyclist. Known as the “Black Cyclone,” he was the first African American cycling world champion and the second black sports champion. www.majortaylorassociation.org

The Wapahani Trail is within a mile of the 250-acre White River State Park, one of the largest urban parks in the nation. The park’s cultural trail is in the heart of the downtown area and, aside form the numerous attractions, museums, outdoor activities and sites, what makes this park so sensational is the fact that everything is within walking distance. There is no need for transportation and that alone makes Indianapolis White River State Park a premier family destination. Visits should begin in the Visitor’s Center where you can obtain information on events, schedules, attractions, make reservations and purchase gifts and memorabilia.

Military Park is situated on a parcel of land donated by Congress. From the beginning the park’s history has been tied to the military heritage of the city and the 14-acre park itself is in the shape of a military badge. Gen. Lew Wallace, author of “Ben Hur,” drilled troops there in 1846 and during the Civil War soldiers were camped there. It was renovated in 1916 and renamed Camp Sullivan Park and in 1979 it became part of White River State Park.

On May 28, 1999 the Congressional Medal of Honor Memorial was dedicated adjacent to Military Park. The memorial is comprised of 27 freestanding, glass walls that range from seven to 10-ft. tall. It honors 3,436 individuals who have been awarded the MOH in 15 conflicts from the Civil War to Somalia. Their names are etched in the glass. In the evening, prerecorded stories of the MOH winners are related, many by the recipients themselves. www.medalofhonormemorial.com

The Farm Bureau Insurance Lawn at White River State Park is recognized as one of the top 100 world-class concert venues in the country. This is an opportunity to experience an eclectic schedule of music and performing arts in a gorgeous outdoor setting. A comprehensive list of upcoming performances is available online.

Old Washington Street Bridge is a seven span arch bridge over the White River. The bridge was originally constructed in 1833 as part of the National Road, the current bridge dates from 1916. It was restored and became a pedestrian bridge in 1994. Artworks line the bridge and located immediately in front of a side entrance to the zoo is Bison Plaza. The focal point of the plaza is a life-sized metal sculpture, “American Bison,” by William Arnold.

The Indianapolis Zoo & White River Gardens is a complex that features the 64-acre zoo and 3.3-acre gardens. The award-winning zoo is actually a Conservation Center that contains a zoo. It is one of the few facilities in the country that is accredited as a zoological park, botanical garden and an aquarium. Located in the downtown area, it opened in 1988 at this location focusing on a new concept. Animals are grouped together in biomes complete with wildlife and habitats of African and Australian Plains, Forests, Oceans and Deserts. The newest addition, the Simon Skjodt Orangutan Center opened on Memorial Day with the largest group of orangutans found in any zoo in the nation.

The White River Gardens are located adjacent to the entrance to the zoo and is included with zoo admission. The Hilbert Conservatory is dedicated to the mission of preserving the beauty and history of Indiana’s gardens. The 5,000-sq. ft. glass conservatory is 65-ft. tall with an overall structure that is reminiscent of a silo. The DeHaan Tiergarten, outdoor gardens, showcase a shade garden, a sun garden a water garden and a wedding garden. www.indianapoliszoo.com

NCAA Hall of Champions is a 30,000-sq. ft. venue dedicated to featuring the 23 intercollegiate sports and 87 national championships under the aegis of the NCAA. Galleries are on two levels with numerous interactive kiosks and activities throughout. Tours begin in the Great Hall with a series of sculptures, placed high on the wall, that replicate a diver from opening position to entering the water.

The life-sized Flying Wedge, a bronze sculpture, greets you in the foyer. The players in the formation are authentically attired and are the average size for a 19th-century football player, 5’9” and 160-pounds. Harvard launched this formation in 1892 against Yale and despite the level of injury other colleges adopted it. After 18 students died from football related injuries in 1905, President Theodore Roosevelt convened a meeting to force colleges to change the game or ban it. In March 1906, 60 schools met and formed the Intercollegiate Athletic Association of the United States (IAAUS), a rule making organization. It became the National Collegiate Athletic Association (NCAA) in 1910. Today, its membership exceeds 430,000 student athletes.

There are three theaters and video stations throughout the facility. The Hall of Champions is located on the first floor and on the second level you can test your skills in a replicated 1930’s basketball gym, against an umpire, skiing, on an indoor track or against a tennis serve. This is a great attraction whether or not you are into sports. www.ncaahallofchampions.org

Indiana State Museum opened in 2002 with 60,000-sq. ft. of permanent exhibition space and 12,000-sq. ft. dedicated to changing exhibits. The museum’s permanent collection contains thousands of objects that help interpret the state’s history. The collection was started in 1862. The three level site includes a state-of-the-art conservation lab and IMAX Theater. The theater is 16-stories tall, 84-ft. wide and produces 12,000 watts of digital surround sound. Locally made movie snacks are available at the concession stand for all shows and craft beers and wines are available for shows after 5 PM.

Tours of the museum begin on the exterior with The 92 County Walk. The building’s unfinished limestone walls feature original sculpted panels representing each of the state’s 92 counties. James Dean and President James Garfield are depicted on their county’s panel.

John Dillinger’s 1933 Essex Terraplane is situated in the foyer. The Indiana born Dillinger was in this car in 1934 when he escaped from a shootout at the Lincoln Court Apartments and two bullet holes are visible in the front of the car. Museum tours begin on the first floor with an eight minute orientation video and proceeds into a gallery with exhibits on the birth of Earth 4.6-billion years ago. Highlights of the exhibits are a lunar sample on loan from NASA, the world’s largest Omniglobe, 1-million grains of sand in a glass globe and an exhibit on the African American presence and the Underground Railroad in the state. Galleries are chronological. www.indianamuseum.org

The Eiteljorg Museum of American Indians and Western Art is unique in the Midwest. The museum exhibits both Native American and the best Western art collection, from 1820 onwards, in the world. The basis for the museum’s collection is the 2,000-object collection of Harrison Eiteljorg. He went west in the 1940s, began collecting out of respect for the culture and recognition of the beauty of the art and began supporting a number of emerging native artists. He also amassed a large collection of African art that is now part of the collection of the Indiana Museum of Art.

The Eiteljorg opened in 1989 and grew with expanded gallery space, a sculpture garden and the Sky Café. Exhibits are on two levels with the Canal Level featuring the Kincannon Learning Circle, Public Education Center and Family Terrace. www.eiteljorg.org

As previously mentioned one of the real delights of Indianapolis as a destination is the fact that you can arrive at the airport and take a shuttle ($10) or public transit ($1.75) directly to White River State Park or drive and park and never need transportation to reach the park sites and attractions or accommodations.

Big Blue, the largest Marriott in the world is the luxurious anchor of the new Marriott complex that includes two additional hotels, Springhill Suites and Fairfield Inn, each with unique offerings and accommodations at varying price levels and more than 1,600 rooms combined. The hotels are strung out like pearls along the park’s edge and one need only walk across the street to access all there is to offer. Each hotel in the Marriott Complex has dining facilities, valet and self-parking, business facilities, wifi and panoramic city views. www.theplacetobeindy.com

Mass Avenue is Indy’s Arts and Theater District and although not part of the White River Park Cultural District, it is a must see. You can feel the vibe as you visit the area and pop in and out of its nine galleries, boutiques, performance venues and dining establishments. www.DiscoverMassAve.com

Pizzology creates an awe-inspiring selection of craft pizzas and handcrafted beers. The owner Neal Brown, a James Beard finalist, seeks to bring local, responsibly raised food to the public at affordable prices. In keeping with the theme, the restaurant is decorated with photographs of real farmers. Everything here is good and the homemade sausage is incredible. www.pizzologyindy.com

Union 50 is situated in a historic structure that once served as the Bricklayers, Masons & Tile Setters Union Hall. This upscale dining venue offers a sophisticated seasonal menu, a wide-range of spirits and lives music nightly. The service is impeccable and the atmosphere is conducive to both intimate and group dining experiences. www.union-50.com/Home

When looking for an affordable family vacation idea look no further than White River State Park. You have my word you will be delighted. www.inwhiteriver.com