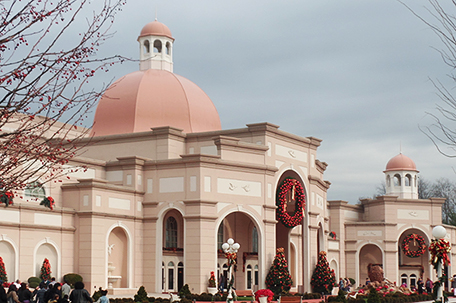 ABOVE PHOTO:  Sight and Sound Theater

An Indian path existed for hundreds of years between the Delaware and Conestoga Rivers, Philadelphia and the Lancaster, Pennsylvania region prior to the settling of Europeans in the area. The path was widened in the 1600s to accommodate travelers, and by the end of the century the Great Conestoga Road was the principle route between Philadelphia and the inland colonies. As the road was more heavily traveled, a need for a better road arose and the Philadelphia & Lancaster Turnpike Road Company was established in 1792 to construct a 50-ft. wide road between the city and Lancaster.

Nine tollhouses were situated along the 70-mile road, with tolls ranging from $.24 to $1 (about $14 today) depending upon how you traveled. Taverns lined the turnpike, providing rest and respite along the way and one of two remaining of the original sixty is the 1706 General Wayne Inn in Merion, Pennsylvania. It is intact, but is currently not in operation.

Lancaster, much to many people’s surprise, is both a county, founded in 1729, and a city, established a few years later. The county is comprised of more than 60 towns and villages with colorful names, distinguished histories, one-of-a-kind attractions and unique shopping, accommodations and dining options. Lancaster is an all-season international visitors’ destination but it offers the holiday traveler even more special and rare treats. @DiscoverLancPA

The path to the state-of-the-art Sight & Sound Theaters began on the Lancaster farm of Glenn Eshelman, who used his creative talents to present public programs to organizations. In 1976, he debuted a theatrical production and in 1987, the first live stage show opened at the Sight & Sound Auditorium. The current theater complex, with a 300-ft stage, opened in 1998 with a seating capacity of 2,000. Shows are staged with outstanding acoustics, colorful sets up to 40-ft. high, costumes and an ethnically diverse cast. Use of a three-sided stage and live animals provides an immersive experience. 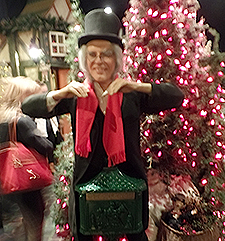 Christmas around the world

“Miracle of Christmas” will be presented several times a day until January 2, 2016. The musical takes the viewer from the betrothal of Mary and Joseph to the arrival of the Magi in Bethlehem with an emphasis on the secondary story of the love between Mary and Joseph. Visits to places in Israel in the production were undertaken by members of the theatrical team to ensure historical accuracy and insert minor details that elevate the production to a work of art.

Bird-in-Hand, 5 miles from Sight and Sound, is home to the Amish Experience; interpretive tours of the Amish House, one-room schoolhouse, area tours, buggy rides and the Amish Experience Theater F/X production, “Jacob’s Choice.” The complex is a winner of Trip Advisor’s “Certificate of Excellence.” This holiday a new experience, a Victorian Christmas Magic Lantern Show, “A Christmas Journey, ”will be presented until December 31, 2015. Amishexperience.com 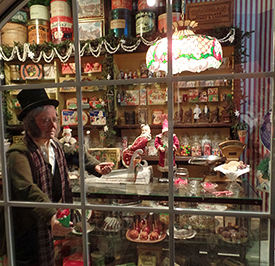 Magic Lantern shows were the forerunners of motion pictures. The device was invented in 1657, was originally illuminated by candles and its first use was documented in America was in 1743 in Salem, Massachusetts. By the end of the 19th-century, there were more than 30,000 lantern showmen and 75,000 performances annually in the United States. The Amish Experience Magic Lantern Show is the only remaining permanent show of its type in the world.

Prior to the use of electricity, limestone lighted with gas was used to create “limelight,” a term still used when actors “step into the limelight.” The art of magic lantern shows was often used as a feature in Victorian séances using kerosene and often accounted for appearances of the dearly departed. There are three parts that make up the show, music, images projected on a large screen and storytelling, all simultaneously accomplished by the showman.

Professor Phineas T. Firefly is the consummate showman as he leads guests through a Victorian holiday celebration. Festivities include, in addition to the magic lantern show, a holiday quiz, seasonal songs, storytelling and historical background. Many of the show’s slides are original and are handpainted while newer slides are photographic reproductions. Special effects are accomplished using different types of slides. Magiclanterntheater.com 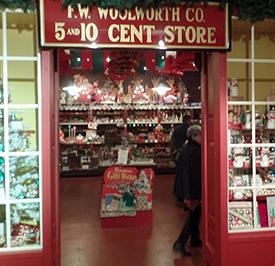 The award-winning National Christmas Center is a great year-round destination, but it takes on special meaning around the holidays. The center is the area’s gift from James Morrison, whose vast collection interprets, collects, preserves and showcases Christmas Past in memory and legend. Fifteen galleries inside a 20,000-sq. ft. museum showcase the history of the holiday and celebrations from around the world incorporating more than 500 Santas and 40 life-sized wax figures. Tours are self-guided and every gallery has a host of highlights. Not to be missed is a diorama based on Virginia O’Hanlon’s 1897 letter to the New York Sun newspaper questioning the existence of Santa Claus. The response from editor Francis Church beautifully explains the meaning of the American Christmas spirit and is widely reprinted annually. The diorama includes a copy of the letter, a recorded reading, and Church’s original desk. A replicated Woolworth’s toy department, once at 10th and Market in Philadelphia, the animated “A Tudor Towne Christmas” and an enormous putz are also stops on the themed tour. 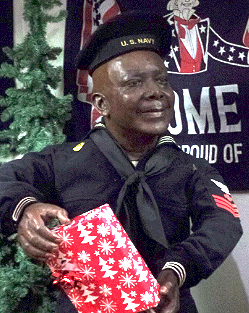 An immersive journey through the Biblical era Holy Land takes visitors from Nazareth to Bethlehem, beginning with a Roman centurion reading Caesar’s taxation decree. A winding path guides you pass life-sized exhibits of a village home and a carpentry shop and leads into a wilderness with bandits and mountain lions and eventually an oasis caravansary, a desert market filled with sale and trade goods.

The National Christmas Center has been designated one of the Travel Channel’s “Most Christmasy Places in America.” It is open daily through December 31, 2015 so visitors can have the ultimate Christmas Experience. nationalchristmascenter.com

Make the most of the season. Visit Lancaster. DiscoverLancaster.com