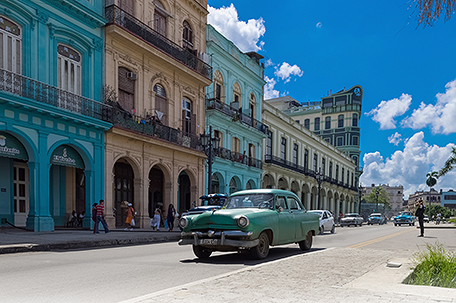 I was 5-years-old in 1960 when Fidel Castro left the Shelburne Hotel in Midtown Manhattan, citing  what he called an unreasonable demand of $10,000 cash upfront from the Cuban delegation visiting the U.N. against possible damages, left the luxury hotel and headed uptown to the Theresa Hotel in Harlem.

There, he was greeted by cheers from African Americans who welcomed his arrival with  the kind of enthusiasm usually reserved for the homecoming of a long lost son.

Over several days, he met with everyone from Langston Hughes to Malcolm X and Nikita Krushchev, the First Secretary of the Communist Part of the Soviet Union, who is widely known for making his point by banging his shoe on the lectern during a speech before the United Nations.

Harlem was abuzz as hundreds of people regularly kept watch outside the Theresa as the celebrated revolutionary temporarily made Harlem the unofficial capital of Cuba during his stay in the U.S. 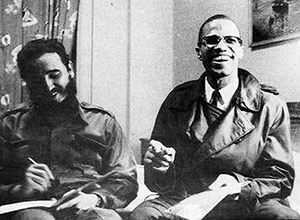 Fidel Castro and Malcolm X at the Theresa Hotel in Harlem

Castro’s visit left such an indelible mark on African Americans that it has become legendary as a symbol of both resistance and validation from this world leader who turned his back on the wealth of Manhattan to spend time with the “folks” Uptown, and had a ball.

It was that memory that stayed with me throughout a visit to Cuba a year before President Barack Obama announced the dismantling of 56-year-old sanctions against this Caribbean nation.

Then, it was still a somewhat arduous route to get permission from the U.S. to visit so instead, I booked passage through Pathfinders Travel, which put together a trip to the largest island in the Caribbean via of a Canadian cruise ship departing from Jamaica.

Upon arrival in Cuba, I simply showed my passport at the dock in Havana, got a temporary visa and was then allowed to move freely throughout the country. 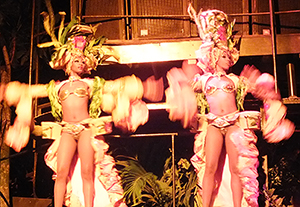 My daughter Jamila and I visited the major cities of Havana and Santiago, several smaller villages, and the town of Biran where Castro and his brother Raul were born.

I had been told that visiting the country was like going back in time, but considered it an exaggeration until I stepped on the streets of Havana and was immersed in a country and people where time indeed seemed to have stood still.

In bustling Havana and Santiago, every other car was either a Detroit-built behemoth from the 1950’s, or a Russian or Eastern European “economy” model with few frills.

From cathedrals to theaters and villas, the Spanish-styled buildings (Spain ruled Cuba from the 16th Century to 1898) were symbols of a bygone area that merged fluidly with yet another bygone era of mobsters, gambling, and corruption that literally paid for the nightclubs and hotels that surround Havana like a wreath.

Here, you can still attend a lavish performance as impressive as any show on the Las Vegas Strip i’ve ever seen at the Tropicana Night Club, a place where  American gangsters like Meyer Lansky and Lucky Luciano held court and profited immensely.

A bottle of Cuban rum is placed at each table for tourists along with a couple of cans of Coca-Cola, cigars, glasses, and a smile and wink from the waiter. Food is optional.

It was an authentic throwback to an era where showgirls performed in chandelier headdress, skimpy costumes, and the male performers sported colorful flamenco shirts and the type of charisma worthy of the shirt and the dance.

Odes to the revolution that liberated Cuba from the U.S. supported regime of Fulgencio Battista in 1959 and gave birth to this current, complex Cuban mixture of pride, independence, and a deep love of country and family were everywhere.

From villages in rural areas like Biran, to communities all over the city, there is a “revolution” square that is frequented every evening by families and friends to talk, eat, listen to live music, or simply smoke a Cohiba and watch the evening activities unfold.

In Santiago, the bullet marks are still visible on the walls of the Moncada Barracks where the Castro brothers first took up arms against the Battista regime.  Though the attack failed and they were captured and thrown in jail, like the reliefs of images of the revolution that can be found on any wall that has space, the bullet holes act as a guide, memory and compass that simply states “we are still here”.

The Cuba after the sanctions will no doubt be different.

The fact there are so many old cars is a testimony to the impact of not being able to import new ones, but an even stronger testimony to the resilience of the people in creating parts and maintaining these cars in mostly mint condition for close to 60 years.

If you go, and I hope that you do, there is good food, music and people who are genuinely friendly and welcoming.

That’s not to say that Cuba doesn’t have it’s share of economic and political problems.

There is an obvious need for environmental improvements as the smog is thick in parts of the country because it still depends heavily on antiquated coal plants to provide electricity, and for many its still a hard-scrabble existence where food is tight and poverty is as visible here as in any American city.

Still, the spirit of the Cuban people is palpable as the sanctions also gave no room for the import of cell phones, portable music devices, cable TV and other distractions that have made the art of conversation in the West a quickly dying form of communication that requires thought, interest and manners.

All they have is each other and it is, perhaps, the true strength of this country—family and focus.

When you go, I strongly suggest you stay clear of the corporate tours and buses.  Hire, instead, a driver of one of the many personal taxis. With these drivers, not only do you get to travel in a goverment-registered 1959 Buick that’s privately operated, you may also get a personal tour  that includes the homes of people (also registered and licensed) who will serve you an authentic Cuban meal and rum to wash it down.

Cuba, I hope, will always remain a country of contrasts, pride, love, song and a charisma very much like the stories of its now deceased leader who chose to liberate a stereotype for just one moment by paying homage to the voices of a community in Harlem that understood what it meant to be denied a seat at the table.

Five steps to a truly life-changing visit to Cuba

Fidel Castro dies at 90 in Cuba