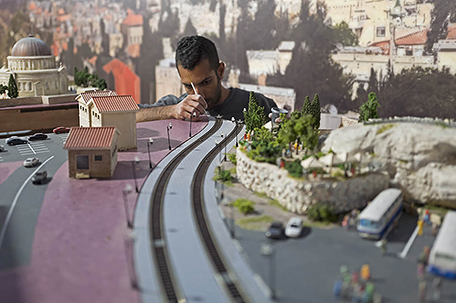 ABOVE PHOTO:  Putting final touches on the Middle East, making sure the trains run on time.

The indoor 49,000-square-foot display includes scale models of structures, cities and landscapes from the Brooklyn Bridge and the Eiffel Tower to the pyramids of Egypt and China’s Forbidden City, along with the Taj Mahal, Mecca, Niagara Falls and Rio de Janeiro’s Christ the Redeemer statue on a hill overlooking the beach.

Many of the structures are remarkably detailed, like one of Grand Central that includes the famous New York train terminal’s cathedral windows, opalescent clock and zodiac symbols outlined on its green ceiling. Another section of the display shows a New England scene, trees ablaze with autumn colors next to a snowy mountain.

The attraction is named for the 18th-century novel “Gulliver’s Travels,’’ which told the story of a man shipwrecked on an island inhabited by tiny people. Gulliver’s Gate scenes are filled with little toy-like people and vehicles, but the attraction has one other thing in common with “Gulliver’s Travels.’’ The book was a satire, and Gulliver’s Gate offers a few humorous winks at real-world scenarios and pop culture, like a traffic jam in St. Petersburg, Russia, and a Manhattan scene of mayhem with a body sprawled on the ground near an ambulance with flashing lights. You’ll also find graffiti in several different languages and see the Beatles crossing Abbey Road. 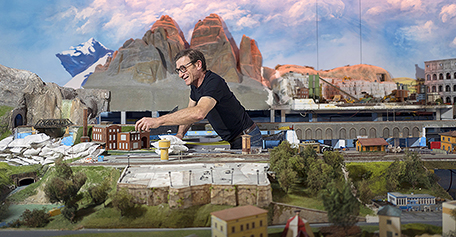 A sneak peek of features from our Europe exhibit.

Gulliver’s Gate has a surprisingly old-school feel, more like a traditional museum diorama or model train exhibition than the high-tech, video-driven installations found in many newer attractions these days. There are just a couple of small video screen components along with a few moving parts in each area, including balloons, boats and depictions of a concert in England that will alternate between Adele and the Beatles. Gulliver’s Gate chief marketing officer Jason Hackett described the experience as uniquely “forward-looking and nostalgic,’’ with intergenerational appeal.

Hackett says the exhibit will be tweaked periodically to keep it up-to-date. One last-minute addition was a tiny model of the “Fearless Girl’’ statue that recently appeared in Manhattan’s financial district across from the famous charging bull sculpture.

Visitors will be able to access an app on their phones to help identify what they’re looking at. In addition to the hefty $36 admission ($27 for seniors and kids ages 3 to 12), there are a couple of pricey add-ons. For $44, you can step inside a scanner to create a 3-D model of yourself. The model takes three weeks to complete but you can have it placed in the display alongside the other little people. For $145, you can get the scan, have your tiny model placed in the display and get an action figure-sized model mailed to you.

Gulliver’s Gate is located on West 44th Street near several Broadway theaters and Carmine’s, an Italian restaurant popular with tourists. It’s one of several new attractions opening in the Times Square area this year. Opry City Stage, an entertainment complex devoted to country music and Southern culture, opens this summer. The NFL Experience Times Square will showcase pro football when it opens in November. And National Geographic ENCOUNTER: Ocean Odyssey launches this fall.

Gulliver’s Gate co-founder Eiran Gazit is behind a similar attraction in Israel that depicts that country’s landmarks.