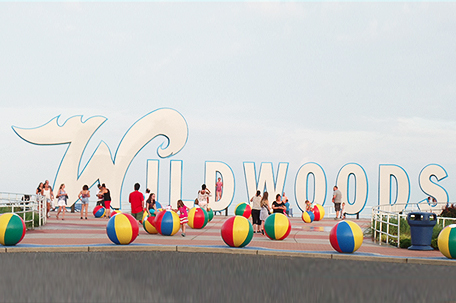 The Delaware Indians, specifically the Lenni Lenape, were among the earliest settlers of the region we now know as the Wildwoods and it was they that inhabited the Five Mile Beach area on August 28, 1609 when Henry Hudson sailed the Half Moon into Delaware Bay. Robert Juet, a member of the crew, recorded the beauty of the site. Realizing that this was an inlet and not the Northwest Passage to China Hudson and the Dutch East India Company sought he sailed north and left no settlers. The area was unexplored until 1664 when Charles II conveyed the land to the Duke of York. There appear to be a number of land claimants until 1717 when the West Jersey Society passed the title to four investors who used it primarily as farmland.  Scandinavian fishermen, the first white settlers, moved onto the land after the Civil War and named the area Angelsea.

On June 29, 1776 the overlooked naval Battle of Turtle Gut Inlet took place. Philadelphia was an extremely important supplier of the Continental Army and merchant ships were constantly called upon to slip through the British blockade of Delaware Bay and pilots and fishermen of the area used their knowledge of the local waterways to assist them in their efforts. On June 28th the Nancy was sighted and pursued by two British warships. In the early hours of the next morning Captain John Barry spotted the Nancy and, realizing it was in trouble, took command of two ships and sailed to her rescue.

Barry and his men boarded the ship, fought off the British and simultaneously began unloading the her cargo. With little more than half the cargo safe Barry ordered the men to abandon ship. The two captains rigged the ship with 50-pounds of gunpowder and, waiting until the last moment before jumping overboard, blew up the Nancy. The first British sailors to board were killed and it is said that the explosion was heard in Philadelphia. Captain Barry went on to be recognized as Commodore Barry, “The Father of the American Navy.” The battle is memorialized on the Seal of Wildwood Crest.

Early settlers entered the area by crossing the wetlands by boat until a wooden bridge and a rail line were constructed in 1884. Four years earlier, Sarah Andrews became ill while in Vineland, New Jersey. The doctor advised her husband that she would benefit from a healthier climate so he took her to Townsend’s Inlet. The following year he purchased property on Five Mile Beach and in 1885 Aaron Andrews and five others formed the Holly Beach City Improvement Company and Holly Beach Borough was incorporated. The Borough of Wildwood was established in 1895 and in 1912 Holly Beach and Wildwood were consolidated into the City of Wildwood. Wildwood Crest was founded in 1905.

Alexander Boardman was a train conductor who grew weary of extracting sand residue from his cars. His solution, a wooden path, would first be put into operation in Atlantic City in 1870. In 1900 the City of Wildwood implemented the use of a “boardwalk” that was laid out on the sand, was 450-ft. long and was removed in winter. It was so successful that three years later the city constructed a wider, elevated boardwalk. Today the Wildwoods boardwalk is 2-miles long and visitors can walk or ride aboard a Wildwoods Boardwalk Sightseer Tram Car with electric cars that date from the 1939 New York World’s Fair. In 1949, five of the cars were placed in service in the Wildwoods. Rides are $3 each way.

There are a number of truly unique things about Wildwood, not the least of which is its Doo Wop legacy as evidenced by the singular architecture. In the early 1990s, the Mid-Atlantic Center For The Arts designated architectural styles developed in the 1950s and 60s that featured vibrant colors, plastic palm trees and flamingoes, swooping lines, space motifs, neon lights Polynesian and Chinese themes and low modular furnishings Doo Wop. The architecture was named after a singing style that was the rage at the time.

The Doo Wop Preservation League Museum is dedicated to protecting and showcasing the sites and history that link Doo Wop and Wildwood. In the 1950s, the city consciously chose to capitalize on pop culture. The buildings themselves were the embodiment of a teen dream and an advertisement for all the fun to be had. The first motel built in this style was the Ebb Tide in 1957. The museum offers guided tours and a downloadable 133-site driving tour.

Wildwood was ground zero for rock and roll in the early days and important venues are included on the tour. Chubby Checker knew he had a winner with the Twist and he offered to perform at the Rainbow Supper Club for free to promote his song and dance. The rest is history. Others who performed at clubs throughout the city include The Supremes (20 shows for $3,500), Danny and the Juniors, Sammy Davis, Jr. and Bill Haley and the Comets. Contact the museum for current tour information. www.doowopusa.org

Morey’s Piers and Beachfront Waterparks have been voted one of the “Top Three Amusement Parks in the World” by Amusement Today. Will and Bill Morey began construction on what would become a seaside amusement complex in 1969 and have been continuously making additions since that time. The piers and parks encompass six blocks, 18-acres, and three amusement piers with more than 100 attractions. The Morey’s entertainment empire also provides accommodations in the form of three resorts. Each of the three piers offers a different experience and singular highlights. The Pan American, Port Royal and Starlux Boutique Hotels are designed to meet the demands and budget of every traveler. Each hotel offers packages and promotions that are available online.

Adventure Pier’s School of Rock Stage provides a full schedule of musical entertainment while artBOX gets your creative juices flowing. artBOX, an interactive art experience, is presented in and around a structure created from 11 repurposed shipping containers. Workshops under the tutelage of a resident artist provide an opportunity for participants, of all ages, to make and take a wonderful art object. Some classes require a fee and appointments are necessary.

Mariner’s Pier opened in the late 1970s and continues to provide a home for the classic amusement pier rides. On this pier Morey’s Giant Ferris Wheel gives guests the unique chance to dine with a view. A gourmet Breakfast in the Sky, complete with white linen and china service, can be reserved Saturdays, Sundays and Mondays in July and August. Reservations are required (609-846-1624). Mariner’s Pier is anchored by, as is Surfside, a waterpark.

The 20-ft. tall, 4,400-pound, KONG returned to Surfside Pier this year. The 60-ft. tall thrill ride featuring the classic Kong, clad in an “I Love Wildwood” tee shirt is perched atop a lighthouse as he attempts to swat the riders nearest to him. The ride must be seen after dark to get the full effect of Kong snorting smoke and fog and the LED lights that illuminate each vehicle. Directly below the amusement visitors can purchase souvenirs at the 3,000-sq. ft. KONG & Co. Additionally guests have access to charging stations, refreshments and comfortable seating. 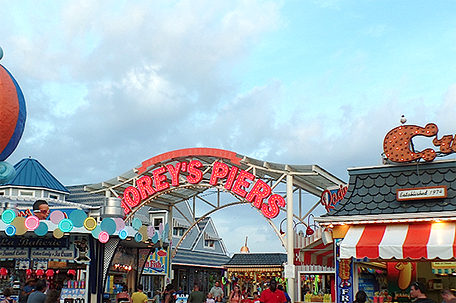 There are many things that make Morey’s Piers special including brief announcements about the history of Wildwood broadcast throughout the day and shops and dining venues line every inch of the boardwalk. Each ride is classified as a High Thrill Ride, Moderate Thrill Ride, Mild Thrill Ride, Extreme Ride or Added Attraction so that parents are given the information they need to select appropriate experiences for their family. Added Attractions require additional tickets. Brochures are readily available that contain maps, pictures, ride intensity levels and height restrictions. 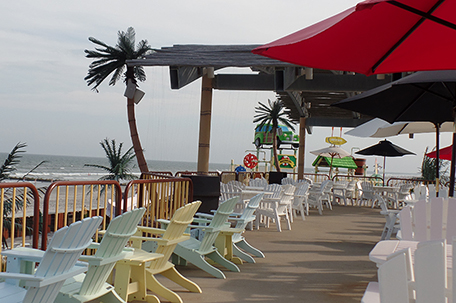 Stubborn Brothers Beach Bar and Grille, a new dining venue, is the best place to eat and enjoy the ocean view. The menu offerings are numerous and each dish is delicious. Highlights here include the signature drinks and dolphin sightings. The name is a result of the Morey brothers inability to agree upon a name, hence, Stubborn Brothers. moreyspiers.com/ #gowild

The ride from Philadelphia to Wildwood is 120-minutes, the thrills, endless.

Quvenzhané Wallis of “Beasts of the Southern Wild” Crazy about Nazie!