Freedom and Order: The Quilt Masterpieces of Gee’s Bend–revisited 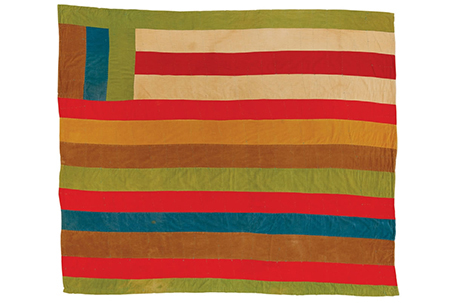 A new exhibition has just opened at the Philadelphia Museum of Art: “Souls Grown Deep: Artists of the African American South.” It includes sculpture, painting, and some of the amazing Gee’s Bend Quilts. As the public has a new chance to view these quilts, I want people to know of a thrilling class taught by Aesthetic Realism consultant and artist, Marcia Rackow in which she described the beauty of so many of them and placed their importance as art and for people’s lives.  In the museum/gallery classes she teaches, “The Visual Arts” and the Opposites, the art of the world is studied — from the masters at the Metropolitan Museum, treasures of African art, to the latest works showing in New York’s galleries — based on the great principle stated by Eli Siegel, founder of the education Aesthetic Realism: “All beauty is a making one of opposites, and the making one of opposites is what we are going after in ourselves.”

The particular class which I tell of now, and was happy to attend in 2003, was taught by Rackow at the Whitney Museum’s exhibition “Gee’s Bend: The Women and Their Quilts,” which included 70 quilts made from 1920-1990 by descendants of slaves in rural Gee’s Bend, Alabama. Astounding in their variety and ingenuity they were described by one critic as “some of the most miraculous works of modern art America has produced.”

They came to national attention with the Freedom Quilting Bee, a cooperative arising from the Civil Rights Movement in the 1960s, and were sold at Bloomingdale’s and Saks, providing income for the quiltmakers. But they were largely forgotten until the 1990s, when they were rediscovered by art collector William Arnett and his family — and led to travelling shows which have been touring museums ever since.

Rackow described the African American women who made the quilts, and whose families were tenant farmers on the former Pettway plantation. Most grew up in log cabins with walls covered with newspapers and magazines to keep out wind and cold. Here quiltmaking, handed down over four generations, was a necessity of life, making use of old, worn-out clothes, remnants, cotton sheets and feed sacks. In a documentary shown at the Whitney, women told how nothing was thrown away: “There were no extras. We were so poor, you couldn’t imagine it.” Some walked many miles a day working in the fields.

Yet in the midst of misfortune and pain, they made these beautiful quilts. All art — Siegel explained — arises from the deepest desire in every person, “to like the world honestly.” We saw stirring evidence for this, as Rackow discussed the designs and technique of many quilts. “Out of a life of great hardship,” she commented, “these women show the indomitable desire to like the world, give form to it — beautiful form.”

She read these questions about Freedom and Order from Siegel’s historic “Fifteen Questions”, “Is Beauty the Making One of Opposites?”:

“Does every instance of beauty in nature and beauty as the artist presents it have something unrestricted, unexpected, uncontrolled? And does this beautiful thing in nature or beautiful thing coming from the artist’s mind have, too, something accurate, sensible, logically justifiable, which can be called order?”

Rackow said, “There is a terrific sense of symmetry and order in the quilts, and also something very unexpected, free, even mischievous.” She discussed Arcola Pettway’s “Lazy Gal” Variation 1976, a Bicentennial quilt composed like an American flag—a drama in corduroy stripes of intense, vibrant colors and also cool colors. While the pattern is regular—horizontal bands of stripes, she pointed to subtle and unexpected color combinations—one dark blue horizontal strip next to the brown is restful, but next to red it vibrates. “There is,” she said, “a true spirit of independence in the way the women quilted.”

This was visually evident in varieties of classic and often used designs: Chinese Coins, Flying Geese, Housetop, and Lazy Gal, which I liked very much. Yet each work is unique. Annie Mae Young said: “I never did like the book patterns….I like big pieces and long strips. However I get them, that’s how I used them. I work it out, study the way to…find the colors and the shapes and certain fabrics that work out right.”

Loretta Pettway’s “Medallion” (1960), made of synthetic knit and cotton sacking is one of the most dramatic and beautiful. Rackow said, “It looks so modern in its design. On a black background there is a narrow white rectangular border — very simple, with a rectangular shape in the center. The white band is wild — it doesn’t follow the outside shape but curves and dances in space. There are curving rows of white stitching on the black, like tiny stars in the night.”

“The rectangular shape in the center,” she pointed out, “is created by two columns of lively colored stripes—vertical on the left, horizontal on the right. Lavender, pale green, orange, bright red and black, are in a free, vibrant relation. There is an optical effect of almost opposite colors: lavender and orange and the sweetness and acidity of lavender again with green. There’s a terrific interplay of surface and depth: we go into darkness and emerge from it. It is very orderly and symmetrical, but also wonderfully mischievous: the shapes are not quite rectangular, and the stripes are uneven and curve in space. The regular is irregular, in motion. It is an amazing work.”

Rackow continued, “The women who made these quilts came to expression that shows the desire for aesthetics in the human spirit. These quilts, in their form and beauty, are an implicit criticism of the brutal economic and racial injustice these women endured.” I have learned from Aesthetic Realism that unless the opposites of freedom and order, or freedom and justice are together, horrors result.  Slaveowners in the South, after all, felt it was their freedom to own other human beings.

I have also learned that we all have a choice when we see something in the world that is ugly and can’t be liked — we will use it either for contempt or respect. With all these women saw and endured, they made art in these beautiful quilts.  There is good freedom, even something critical — things are shaken up—but that shaking up is in behalf of respect and true order.

I was moved to tears by Lutisha Pettway’s “Bars” (1950), made of denim and cotton, 80×84 inches. A memorial to her husband who died, it is made from his only possessions: work clothes. The worn out, faded areas,  bleach stains, dark places where pockets and cuffs were removed, become elements of a large design. Nine vertical columns of pant legs and sleeves, patches filling out holes, and here and there, a syncopated horizontal band—all make for a tremendously alive feeling: a oneness of presence and unbearable absence. Through the energetic rhythms of fabric, what emerges from the worn cloth is something that puts together abstract design and deep emotion.

What I saw and learned in this wonderful class brought to my mind these lines from Eli Siegel’s poem, “Let the Seeing Go On,” lines I see as standing for the Gee’s Bend artists and their quilts:

Take worn and tattered something

And show it, too, unworn, untattered,

Alice Bernstein is a journalist, Aesthetic Realism Associate, civil rights historian and editor/co-author of  the book, “Aesthetic Realism & the Answer to Racism.” Consultant and art educator Marcia Rackow is on the faculty of the not-for-profit Aesthetic Realism Foundation. Learn more at: www.AestheticRealism.org.