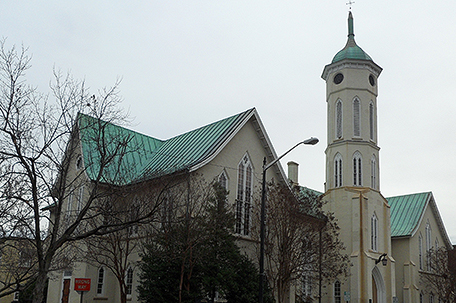 “I am afraid of the lawless Yankee soldiers, but that is nothing to my fear of the Negroes if they rise against us.” -Betty Maury

Fredericksburg, Virginia has always benefitted from a location that placed it at the heart of all of the events that contributed to the making of America. It thrived as an inland port, was an early urban center and served as a gateway to westward expansion. The institution of slavery was interwoven in every event and activity and by the onset of the Civil War the population consisted of approximately 50 percent people of African descent with 1,200 slaves, 350 free Blacks and 3,000 Whites.  An African American male in his prime sold for about $1500, $40,000 in modern currency.

Many free Blacks moved to Fredericksburg in the 1830s to help build a canal. The canal was not a success, but the men remained creating a neighborhood known as Liberty Town. It remains an African American community.

Enslaved workers walking into town were required to have a pass or risk arrest. Their only access to town without one was by means of Free Alley, a footpath on George Street to downtown. The path can still be seen.

Shiloh Old Site Baptist Church was originally Fredericksburg Baptist Church. Services were held with Whites on the ground floor, free Blacks in the balcony facing the altar and slaves in the balcony seated on the sides. All Blacks entered by a separate door. In 1854, the white congregation sold the church to the Black Baptists who renamed it and it became the first Black church in the area. Although the congregation was black they were legally required to have a White overseer present. George Rowe became the minister/overseer at a charge of $50 a month. Rowe resigned when the Emancipation Proclamation was passed. During the war it was used as a hospital, barracks and stable. www.shiloholdsite.org

A residence at Charles and Frederick Streets was once the property of George Aler, one of the city’s largest slave dealers. This was the site of his slave jail, a holding area for men, women and children who were to be traded. Ironically, only a few steps away was the home of Mary Minor Blackford, an antislavery activist.

Blackford was born into a slave owning family, but was an outspoken critic of the system. She and her husband were active in the American Colonization Society and she founded a group to raise money to help Blacks migrate to Liberia and educate females once they were there. Dolley Madison was a member of her organization.

The Blackford family owned slaves and Mary taught her slaves to read, an act that was illegal. She taught them one at a time because it was illegal for a Black person to testify against a White person. During the Civil War Mary’s family was split with some members serving in the Confederate Army.

Mary was not alone in the area in her opposition to slavery. The Moncure Conway House is a designated National Underground Railroad Network site in Falmouth, Virginia. The 1807 Federal-style residence was the homestead of the wealthy slaveholding Conway family. Moncure, one of the sons, attended Dickinson College in Pennsylvania and Harvard Divinity School. He accepted a job in 1854 as a Unitarian minister, but was dismissed for preaching his antislavery opinions. In 1862, learning of conditions in Fredericksburg, he returned to assist his family’s slaves. They had gone into hiding but he traced approximately 30 of the 50 to Georgetown in Washington, DC in July of 1862. He arranged for official permission to remove them from the area and purchased train tickets to Ohio for the group. Leaving nothing to chance he accompanied them on the train through the slave states and resettled them in Yellow Springs, Ohio. The area is still referred to as the Conway Colony.

Conway felt that the Emancipation Proclamation did not go far enough. He moved to England in 1863 but continued to rally support for the North. www.nps.gov/nr/travel/underground/moncureconway 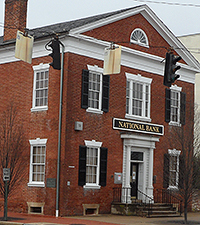 The attributes that had contributed to Fredericksburg’s prosperity were the elements that made it important to both sides during the Civil War. The city is equidistant to Richmond, the capitol of the Confederacy and Washington, DC, the Union capitol. Control of the area was essential for both sides to prevent invasion of their capitols. Fredericksburg also had access to a port that could be used to supply troops and it was a manufacturing city. Four major battles were waged in the immediate area, Fredericksburg would change hands numerous times and the region would be bathed in blood the of 105,000 casualties. All of the battlefields have signage in the form of interpretive plaques and a 15-mile driving trail connects three of the battlefields.

The Battle of Chancellorsville took place from April 27-May 6, 1863. Robert E. Lee and Stonewall Jackson scored a Confederate victory over Ma. Gen. Joseph Hooker’s forces as they attempted to cross the Rappahannock River to surround Lee’s troops even though the Union significantly outnumbered them. The greatest battle loss was the wounding of Jackson at 9:30 PM on May 2nd accidentally by his own men. He died of pneumonia eight days later.

Chancellorsville Visitor Center features displays and an orientation film. A 12-mile looping battlefield trail visits 10 locations including the site where Lee and Jackson bivouacked on May 1st and the place where Jackson was wounded.

Ellwood Manor, a 1790 house was part of a 5,000-acre plantation that is the last standing structure remaining from the battle. The simple eight-room house served as a summer residence for the Lacy family. Lee camped here and during the Battle of the Wilderness Generals Burnside and Warren established headquarters there. The house was used as a hospital, the floors became bloodstained and soldiers left graffiti that remains visible. www.nps.gov/frsp/chanville

Stonewall Jackson’s arm was amputated as a result of his being wounded in 1863. Common practice was for surgeons to throw amputated limbs into a pile outside the medical facility. Rev. Lacy, a military chaplain, rescued the arm and buried it in a cemetery at the rear of Ellwood. Mrs. Jackson did not want him disturbed so the arm remained there. In 1904 a stone marker was placed there by one of his officers. www.nps.gov/frsp/ellwood

In the early months of 1864 Grant was commissioned Union General-in-Chief and began the overland offensive aimed at reaching Richmond. On May 4th the Army of the Potomac crossed the Rapidan River where Lee was waiting to confront him in the familiar Virginia “wilderness.” The Battle of the Wilderness was the first mutual combat for Grant and Lee and the first major conflict following the Battle of Gettysburg. The battle, May 5-6, ended in a stalemate but on May 7th Grant pushed on toward Richmond. The Wilderness Battlefield tour consists of eight locations including the site of Grant’s headquarters. www.nps.gov/frsp/wilder

Grant and his troops marched south toward Richmond from the wilderness and encountered Lee again at Spotsylvania Court House on May 8th and for the next 12 days a battle ensued including hours of hand-to-hand combat. There are eight sites that interpret the battle and tours should begin in the Battlefield Exhibit Shelter. Fredericksburg Road, at the opposite end of the battlefield, functioned as the main Union supply line. On May 21st Grant continued his inexorable march to Richmond. www.nps.gov/frsp/spot

On December 11, 1862, Union troops began bombardment of Fredericksburg from Stafford Heights, directly across the Rappahannock River. Shells fell at a rate of 100 per minute and the casualties exceeded those on D-Day. The battle, with 200,000 combatants, raged until the 13th and resulted in a bloody defeat and a withdrawal on the 14th back across the river. The Union lost more than twice as many men as the Confederacy and caused Lincoln to remark, “If there is a place worse than hell, I am in it.” www.nps.gov/frsp/fredhist

A visit to Georgian-style Chatham, now owned by the National Park Service, is a must when visiting Fredericksburg. The interior is being restored but there are displays on the family and the restoration and architectural details that are of interest. Stunningly the panoramic view from the lawn is essentially the same as that of 1862 and visitors are able to see what Union troops saw.

William Fitzhugh built Chatham between 1768 and 1771 to be the focal point of his 1,280-acre plantation. The estate contained numerous dependencies and more than 90 enslaved workers. In 1805 a number of Chatham’s slaves rebelled, refusing to return to work after the Christmas holiday. An armed force was called upon to restore order and one slave was executed, two died while attempting to escape and two were sold.  Prior to the Civil War, George Washington had been a visitor.

Hannah Coalter owned Chatham in 1857 at the time of her death. Her will stipulated that her slaves be given the choice to remain enslaved and become the property of one of her relatives or accept freedom and leave the area for Liberia or the North. Relatives contested the will on the grounds that blacks were not people and therefore had no right to choose. The will was voided. William Pratt became the owner of a slave laundress named Ellen who might not have understood the will but she knew that she should be free. Pratt gave her a three-month pass in January of 1859 to leave and earn enough money to purchase her freedom. Ellen went North, lectured about southern enslavement and earned enough money to purchase herself and her children and Pratt allowed her mother to leave without payment. She opened a laundry in Cincinnati.

During the Civil War the house was a Union headquarters and a hospital. Clara Barton, Walt Whitman and Dr. Mary Edwards Walker, the first female Medal of Honor awardee, all ministered to the wounded at Chatham. Abraham Lincoln visited to meet with his men making this one of three houses visited by Washington and Lincoln. www.nps.gov/frsp/chatham

Lincoln visited Fredericksburg in 1862 and spoke on the steps of the National Bank of Fredericksburg. Legend has it that when Jefferson Davis visited he was about to speak on the steps when he was told Lincoln had spoken there. He moved to the bank’s steps around the corner. After the war the Freedman’s Bureau was headquartered there

St. George’s Episcopal Church was built in 1849 on the site of an earlier church. The church has three stained-glass windows signed by Tiffany. The cemetery contains the gravesites of Martha Washington’s father and Washington’s brother-in-law Fielding Lewis.

James Renwick designed the Gothic-Revival Fredericksburg Courthouse in 1852. A tower over the entrance was used foe signaling and reconnaissance during the Civil War. Once the Union controlled the city runaway slaves were housed in the basement of the building. Freedman’s court was held there weekly after the war to rule on civil cases involving freedmen.

On April 18, 1862, Federal troops occupied the area surrounding Fredericksburg and on May 2nd they took the city. Slaves immediately saw this as an opportunity for self-emancipation. It is estimated that within the next four months 10,000 slaves left their worksites for the safety the Union soldiers provided for them as contraband before the Emancipation Proclamation. Fredericksburg has established the “Trail to Freedom” to follow their path and learn their stories. www.trailtofreedom.com

Hallowed Ground Tours is the optimum way to visit these sites. Tours can be tailored to your individual interests and pace. Guides are steeped in regional history and make your visit that much more enjoyable. www.hallowedgroundtours.com

Even intrepid tourists need sustenance and Fredericksburg is a “foodie” destination with more than 40 chef-owned restaurants.

The Bavarian Chef is situated inside the historic railroad station. The emphasis here is on good food, great service and camaraderie. The authentic German cuisine uses fresh local ingredients served in enormous portions and the atmosphere is authentically Bavarian. www.thebavarianchef.com

Isn’t it time you stepped into history? Visit Fredericksburg. www.visitfred.com