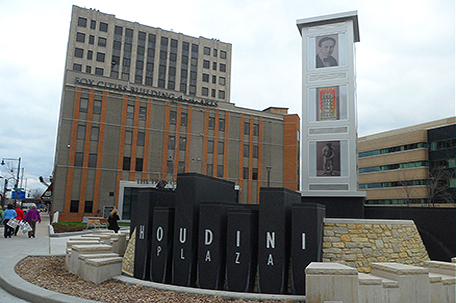 “My brain is the key that sets my mind free.”

Wisconsin’s geography has determined its destiny from the time it was first inhabited by American Indians 10,000-years ago. Archeological evidence notes that the indigenous people traded as far as both coasts and navigated the waterways. Wisconsin’s more than 15,000 interior lakes, rivers and streams, if laid out in a line, would encircle the world and Lakes Superior and Michigan and the Mississippi River bound the state on three sides. The earliest Europeans were drawn to the land because of its mineral wealth. Later, escaping slaves would use water and land routes to cross into Canada.

Etienne Brulé is generally believed to have been the first European to enter the region in 1622. He left no documentary evidence and so the credit goes to Jean Nicolet who entered the area in 1634 and kept a written record. A map owned by Samuel de Champlain is dated 1632 and depicts Wisconsin and was probably created by Brulé.

About 20 years later, fur traders and Jesuit missionaries followed the explorers. The fur trade was extremely lucrative and the first traders were Sieur de Groseilliers and his brother-in-law, Pierre Radisson. In 1673, the first mention of the name “Wisconsin” is documented. The most widely accepted translation for the Indian word is “river of red stone”. The French maintained control of the territory until they ceded it and all of their land east of the Mississippi to Britain in the French and Indian Wars. In 1783 Britain signed away ownership as part of the treaty ending the American Revolution.

The 1832 Black Hawk War was an outgrowth of the government’s seizure of land the Sauk and Fox tribes denied they ever signed a treaty forfeiting. Land conflicts continued as the US claimed increasing portions of land. The Dawes Act and the General Allotment Act of 1887, sealed the fate of the indigenous tribes. Tribal lands, previously held in common, were divided into 80-acre lots owned by individual members. All land remaining after the allotments was sold to settlers.

Congress adopted “An Ordinance for the Government of the Territory of the United States North West of the River Ohio” on July 13, 1787. Among other things, it specifically forbade slavery in Wisconsin and other new territories. In spite of the law, some landowners did bring slaves to the region, most notably Henry Dodge, the first territorial Governor.

In 1842, an Anti-Slavery Society was formed and an important branch of the Underground Railroad ran through the territory. The first documented escape was that of 16-year-old Caroline Quarlls on July 4, 1842. The most frequently cited case of escape is that of Joshua Glover in 1854. Joshua escaped, was caught two years later and was rescued from jail by a crowd of citizens.

Nineteen communities, known as the Fox Cities, are strung out like gems along Wisconsin’s Fox River in the eastern central portion of the state. Each city owes its development to the river but each offers a unique experience. They represent a rare combination of metropolitan services and entertainment with a decidedly small town ambiance and they are all within a short drive of one another allowing travelers to visit sites in several cities in a single day. www.foxcities.org

Shortly after Europeans began to settle the valley, Hippolyte Grignon established a trading post, the White Heron, in 1835. The area would become the village of Appleton 12-years later, named in honor of Samuel Appleton who endowed the new Lawrence University library with $10,000.

The city is in the heart of what is widely recognized as Paper Valley because of its place in the history of the paper industry. Appleton’s first paper mill became operational in 1853 and the city owes much of its uniqueness to the industry. www.appletondowntown.org

Neenah, Winnebago for “running water,” was settled as a Menominee Indian mission in 1835 and the village was initially known as Winnebago Rapids. Mills were built in the area and in 1872 Kimberly-Clark was established. Neenah is an architecture aficionado’s dream come true. There is an outstanding historic tour that encompasses 24 sites with building styles from 19th-century Queen Anne Revival to 20th-century Period Georgian Revival. www.neenah.org

In 1850, Andrew Jackson, a fugitive slave, and his Native American wife settled nine acres in an area they called Sagola. The people of the town wanted to name the town Jackson after Andrew. He requested that they name it Freedom. Irish, Dutch and German pioneers from the East eventually settled the town. www.townoffreedom.org

The 1924 Norman Revival –style History museum at the Castle is both the natural place to start your visit and a Fox Cities premier attraction. The museum is situated inside a former Masonic Temple listed on the National Register. The building has obscure Masonic symbols and Egyptian iconography in the interior architectural elements. It presents, promotes and interprets regional history from the 1840’s onward through interactive exhibits, dioramas, artifacts and memorabilia.

Tours should begin with a series of eight stained glass windows on the first level that depict the significant events in the valley’s history. An exhibit on Edna Ferber, author of “Giant,” is also located on the 1st-floor.

“AKA Houdini” is the featured, internationally famous, exhibit. Houdini claimed Appleton as his birthplace even though he was born in Budapest and the museum has a significant collection of Houdini related items. The exhibit stresses the fact that Houdini was constantly reinventing himself. The museum came under fire from magicians around the world when they inaugurated the current exhibit because it reveals how some of the tricks are accomplished. The Houdini exhibition is located in several galleries. Visitors can pick a padlock, try on a straitjacket and even perform his most famous escape, “Metamorphosis, ” on stage. Houdini died on stage and was buried in a coffin that had been used as a stage prop. www.myhistorymuseum.org

Appleton’s Houdini Walking Tour includes 15 stops marked with brass plaques. Houdini Plaza was dedicated in 1985 and is located on the site of his boyhood home. An outdoor sculpture marks the spot.

Everything you ever wanted to know about making paper you can learn at the Paper Discovery Center. The region became known as Paper Valley in the 1850s and at one point had more paper mills than any other geographic area in the world. The mills flourished here because there was a constant supply of water and it does not flood. Tours begin with a 6-minute film that explains the papermaking process. The first mill made 7,500 sheets daily, modern mills produce 60,000 sheets per minute. The average person uses 750-pounds of paper annually. The majority of the exhibits are interactive. There is a crawl through papermaking machine, you can play Toilet Paper and make your own paper. www.paperdiscoverycenter.org.

Architect William Waters built the Queen Anne-style Hearthstone Historic House Museum in 1882 for Henry Rogers for $20,000. Roger’s house was state-of-the –art and was the first private home in the world to be lit by hydroelectricity. Hearthstone is magnificent with 12-ft. ceilings, handcarved woodwork, fireplaces with handpainted tiles depicting scenes from literary works, original stained glass and four original fishtail radiators. There are nine coal-burning fireplaces that required one full-time employee to clean the soot from the walls taking one hour per foot.  There are nine original light switches. At the time, there was no way to measure electricity usage so customers paid $1 per month per bulb. The house required 50 bulbs.

On the lower level, the garage has been converted into a museum gallery. Visitors can climb onto a velocipede, pedal, and generate enough electricity to make Edison dance. www.focol.org/hearthstone

The Bergstrom-Mahler Museum of Glass features one of the world’s largest collections of paperweights. The paperweights, collected by Mrs. Evangeline Bergstrom, extend from 1845 to 1900. Additional galleries showcase contemporary glass creations, two of six Clichy vases in the world and ritualistic glass pieces. www.bergstrom-mahlermuseum.com

One of the earliest buildings in the valley is the 1845 James Doty Cabin. Doty, the second territorial Governor, constructed this dog-trot log house near its current location. He lived there until appointed Superintendent of Indian Affairs by Lincoln in 1860. In 1948, the cabin was reconstructed using materials from the original and relocated to the current site. Entrance is free.

Shopping and dining opportunities are as unique as the sites and attractions in the Fox River Cities. Urban Evolutions is a destination in itself. UE saves materials from earlier constructions for reuse as furniture and in decorative items. Their line is American made and totally phenomenal. Their products are showcased in the Sundance catalog as well as at retail locations including Urban Outfitters, Nike, Anthropologie and Burberry. Local artisans’ crafts are also featured. www.urbanevolutions.com

The region is justifiably famous for its cheeses and locally grown foods. Simon’s Specialty Cheese is a great place to purchase Wisconsin cheese, local products and regional wines. They offer a tremendous variety and they ship across the country. www.simonscheese.com

Houdini found the Fox River valley so wonderful he claimed it as his birthplace. You should claim it as your next vacation destination.

Airline studies have reportedly found that the recirculated air on planes is cleaned every two to five minutes and eradicates nearly 100 percent of the airborne bacteria and viruses. No matter what studies appear to prove passengers report a high incidence of colds, flu and headaches. The AirTamer A302 is a travel electrostatic purification system that places you in the midst of a 3-ft. sphere of clean and healthy air. The device is FCC approved, is the size of a small cellphone and can be clipped to your clothing or worn around your neck for ease of use. Freestanding it can be used in your hotel room to create a germ free zone for sleeping. It requires two coin cell batteries for sevendays of use and comes in a metal case. www.airtamer.org

SGDstyle’s UrbanUndercover is a fantastic travel product that women have been waiting for. This extra pair of underwear actually has a patented roll up pocket that makes it very convenient to carry a spare pair in your purse or tote. As if that were not enough each individual pair is designed with a pocket large enough to secrete a small necessity, an ID, insulin pump, cab fare, etc. Never be caught unawares again. www.sgdstyle.com

ShaveTech is just the gift for the man in your life. This portable shaver is the sole one of its kind to use your USB port for charging. This feature makes it easy to charge anywhere in the world. It is stylish, no larger than a smartphone and fits just about anywhere. www.shavetech.com