Fall a great time for golf in San Diego 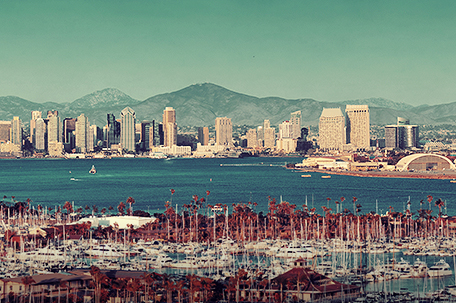 ABOVE PHOTO:  San Diego downtown skyline and boat in harbor.

SAN DIEGO–Summer sends vacationers flocking to the San Diego area, many of them bringing their golf clubs with them. Mild temperatures, great courses, superb conditions. What’s not to love?

But there may be a better time to head to San Diego for golf: Fall.

The courses are still in great shape, crowds are smaller, deals abound and the humid, cool and sometimes overcast weather known as the marine layer isn’t quite so persistent.

“It’s the perfect time to play golf in San Diego,’’ said Shawn Cox, director of golf at The Grand Golf Club in Del Mar. “You’re getting the benefit of the perfect weather, the courses are in great shape and at offseason prices.’’

The San Diego area has become one of the world’s top golf destinations, with around 90 courses in diverse settings from the beaches to the mountains. The list of courses includes some of the best in the country, including The Grand, Maderas Golf Club, La Costa Spa and Resort, Aviara Golf Club and Coronado Municipal. The most recognizable is up the coast from downtown San Diego at La Jolla’s Torrey Pines Golf Course, site of U.S. Opens and an annual PGA Tour event.

Summer brings golfers from around the world to play and enjoy the mild Southern California weather. But here’s a little secret: Summer is also when the marine layer is most persistent.

Contrary to popular belief, the Pacific Ocean is typically still cold during the summer, particularly in the early months. When the cooler surface air over the water meets the warmer inland air, it creates a temperature inversion. That mixing of air masses leads to the marine layer, which often gets pushed onto land by the wind. By the time fall arrives, the ocean temperature has risen and the inland temperatures have dropped, leading to less of a marine layer.

Temperatures during the fall are often in the 70s and 80s with lots of sun.

“It’s some of the best weather all year,’’ said Scott Bentley, assistant deputy director for the golf division of San Diego Parks and Recreation, which operates Torrey Pines. “The nights are cool and crisp, but the days are warm and dry. And the marine layer tends to go away, so we see more sunshine. It’s just a great time of year.’’ 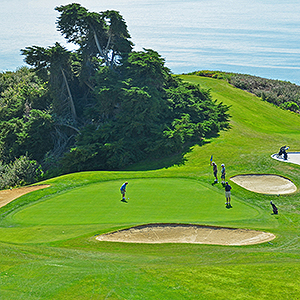 The courses also match the weather in fall.

Unlike the spring, when the courses are still rounding into shape, fall offers a chance to play courses that have grown in during the nice weather of the summer months and are often in perfect shape.

Many of the courses will overseed with rye grass sometime during the fall, which leads to wet conditions for a short while, but the courses round into shape quickly and again are in perfect condition.

“The courses have had the whole summer with the nice weather, the Bermuda has popped, the tee boxes, the fairways, the chipping around the greens, it’s almost like hitting off a driving range mat on every shot,’’ Cox said.

Fall is also a great time price-wise. Many course in San Diego raise rates for the summer months, but prices come down once fall hits, often coming down to the same as winter rates.

Several resorts offer packages where guests get deals on hotel stays and tee times. The Fairmont Grand Del Mar has a Canyon to Coast package that offers two nights, two rounds of golf at The Grand Club and access to tee times at Torrey Pines. Rates start at $525 per night with a two-night minimum.

La Costa has a Stay and Play package that includes three nights, one round at each of its two courses and daily breakfast for around $1,500 for the entire stay.

Wherever you go, there’s a deal to be had and great weather to go with it.