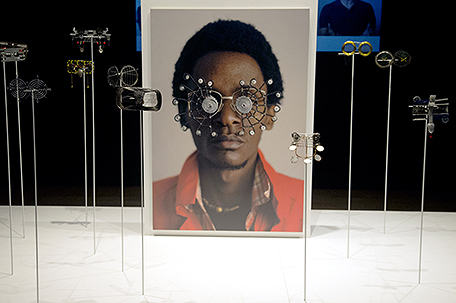 ABOVE PHOTO:  Wire eyeglasses are shown at the High Museum of Art Wednesday, Oct. 11, 2017, in Atlanta.  (AP Photo/John Bazemore)

ATLANTA–A new exhibition opening in Atlanta encourages visitors to abandon their preconceived notions about Africa and explore the creative efforts of people using design to bring about change on the vast continent.

“Making Africa: A Continent of Contemporary Design’’ opened last Saturday at Atlanta’s High Museum of Art. It defines design broadly and delves into the continent’s diversity and vibrancy through more than 200 works by more than 120 artists from 22 countries.

Too often people associate Africa with problems like hunger or corruption, but the exhibition seeks to broaden the view by focusing on people who use design to provide solutions, High Museum curator of African art Carol Thompson said.

“I want people to see Africa in a new way and appreciate the creativity of artists on the continent, past and present,’’ she said, adding that “the exhibition doesn’t deny that there are challenges on the continent but rather addresses those problems head on.’’ 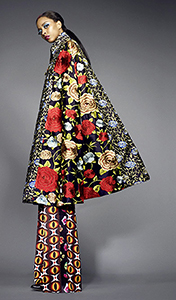 Immediately upon entering is a display of Kenyan artist Cyrus Kabiru’s “C-Stunners,’’ a collection of wearable eyeglass sculptures crafted from everyday objects, wires, screws, shoe polish tins. The pieces are not corrective eyeglasses in the literal sense but are meant to help “correct’’ the perception of Africa, Thompson said.

A collection of biting comic-style images mocks stereotypes and common perceptions. One by South African comic artist Anton Kannemeyer shows a white man in a Superman outfit, with “SR’’ emblazoned on his chest, handing a sack of money to a Black African boy who’s saying “Thanks, Super Rich Man!’’

One of the most captivating pieces in the exhibition is a collaborative project by South African artist Mikhael Subotzky and British artist Patrick Waterhouse. It captures Ponte City, a 54-story circular apartment building in Johannesburg, South Africa. A posh address when it was built in 1975, it has become rundown, though still inhabited, since the end of apartheid.

The two artists photographed every television set, door and window view in the building between 2008 and 2010 and put the 600 photos together in three tall lightboxes in the same order as they were in the building. The result is a captivating glimpse into the tallest apartment building on the continent. 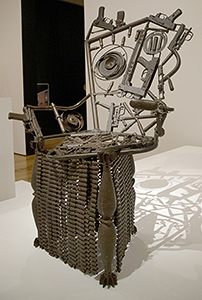 A chair made from weapons is shown at the High Museum of Art Wednesday, Oct. 11, 2017, in Atlanta. “Making Africa: A Continent of Contemporary Design” opened Saturday. Oct. 14 at Atlanta’s High Museum of Art. It defines design broadly and delves into the continent’s diversity and vibrancy through more than 200 works by more than 120 artists from 22 countries.
(AP Photo/John Bazemore)

A chair by Malian designer Cheick Diallo was made from metal wire used in the fishing industry with nylon thread wrapped around it. Colorful stools and tables were made mostly from recycled plastic by Bibi Seck, an artist who was born in Paris and grew up in Paris, London and Dakar, Senegal.

A set of pocket handkerchiefs from fashion label Ikire Jones, recreates 18th century textiles and tapestries but inserts African people into them. An embroidered silk cape, paired with a boldly patterned silk shirt and trousers from London-based Nigerian designer Duro Olowu combines prints and colors in a way that is very characteristic of African fashion, Thompson said.

Technology also fits into the exhibition’s interpretation of “design.’’ A brick-sized device, called BRCK, made by the Kenyan company Ushahidi, is a self-powered mobile Wi-Fi device that allows other devices to access the internet, which has been vital for change in Africa, allowing Africans to connect with each other and the rest of the world.

There are also dozens of videos and digital displays, so many that they can’t possibly all be viewed in a single visit.