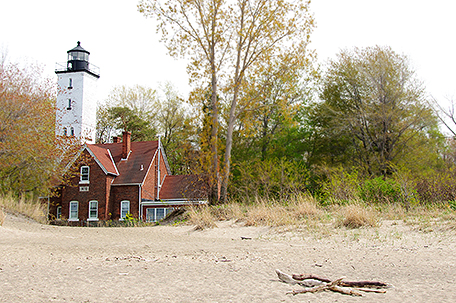 “Life is not separate from death. It only looks that way.”

Presque Isle is located west of Erie Pennsylvania’s downtown. In actuality it is not an island, but is instead a 3,200-acre sandy peninsula that forms Presque Isle Bay, the deep harbor port that made Erie a significant port city. The 13-mile long landmass features the sole “seashore” in the state and more than 4-million visitors a year take advantage of the recreational opportunities and the sheer natural beauty of the area. Activities range from boating to bird watching with a huge range of options in between. dcnr.state.pa.us/stateparks/parks/presqueisle

The earliest documented inhabitants were the Erie Indians who lived on the southern shore of the lake and sustained themselves by hunting and fishing. An Erie legend says that one day an enormous storm came up and they feared they would be unable to withstand it. The Great Spirit, realizing their danger, stretched his left arm out into the lake to encircle them. He then created the sandbar so that they would always be sheltered.

There are 11 beaches each with certain conveniences including picnic facilities, restrooms, volleyball courts, swimming areas and playground equipment. There are 11 miles of hiking trails that range from ¼-mile to 1.5-miles. Skaters, joggers and cyclists are not permitted on the hiking trails, but have access to the 9.6-mile Multi-purpose Trail. The 518-mile Pennsylvania Seaway Trail, a scenic byway, along the Lake Erie shoreline from New York to Ohio crosses Erie.

Four boat launch locations are open from May 1st to the end of October. Water skiing, surf swimming and fishing are permitted, but snorkeling is not. Ice fishing, iceboating, ice skating and cross country skiing are winter options. The park website contains all the necessary information on hours, rentals, regulations, etc.

The Tom Ridge Environmental Center (TREC), situated at the entrance to Presque Isle State Park, is the 7,000-sq. ft. introduction to the history, culture, geology and biological diversity of the peninsula. The building is environmentally friendly and houses a 75-ft. glass-enclosed tower that provides a view of Lake Erie, the Nature Shop, a museum and the Sunset Café. Tours of the building should begin with the 15-minute orientation film and then proceed into the galleries. A unique highlight of the exhibits is a gallery that relates the documented story of Lake Erie’s monster Bessie and the stories of aliens sighted over the lake. Admission is free. trecpi.org

Waldemeer’s, “woods by the sea,” was created at the end of a trolley line to increase ridership 119 years ago and today Waldemeer Water World’s entrance is located across from the TREC. The park has the largest Wave Pool in the tri-state area, up to 1,000 people can enjoy the 4-ft. high waves and there are 16 slides, a heated relaxing pool, free entertainment daily and a kiddie section with a dragon slide. waldameer.com

The peninsula’s first road was a 1.5-mile dirt path that was used by the lighthouse keeper to obtain supplies. In 1925 it was paved. A modern driving trail loops around and encompasses all the significant sites with parking lots and pull-offs.

The Battle of Lake Erie took place on the north shore and the commemorative Perry Monument & Exhibit is located on Misery Bay. Perry’s flagship Niagara was scuttled in Misery Bay to preserve it and Misery Bay’s name refers to the fact that it was the site of Perry’s winter encampment after the battle. He and his men were quarantined there because of smallpox and other diseases. Graveyard Pond, visible from the monument, was the place the battle casualties were wrapped in their hammocks and dropped overboard. The 101-ft. monument was dedicated in 1926. It was designed and constructed at a cost of $45,069. Interpretive panels line the walkway that leads to the structure.

In 1872, a 57-ft. lighthouse tower was built on Presque Isle. The original Fresnel lens in the red brick lighthouse could be seen for 13 miles. The lighthouse can be toured on the weekends and it can be viewed from the beach or the paved sidewalk. There are 188 steps to the top. On the beachside of the lighthouse there is an additional structure, a storehouse, one of the only ones remaining that was used by the keepers to store oil. 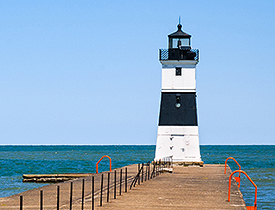 The 1857 Presque Isle North Pierhead Lighthouse is situated at the end of the pier at the entrance to the bay. The original lens, a fixed red light, was replaced by a blinking light and is exhibited in the Erie Maritime Museum. The black and white cast iron tower was originally 34-ft. tall and constructed at a cost of $5,250. It is the only remaining square and pyramidal style lighthouse tower in this nation.

High on a hill above Lake Erie in 1818 the first lighthouse on the lakes was constructed on a two acre plot at the eastern end of the harbor. A 56-ft. lighthouse replaced it 39 years later after the first one showed signs of sinking and the placement of reinforcing metal bands failed to stabilize it.

In the 1870s a 49-ft. lighthouse was built nearby, after quicksand was found on the site of the original and functioned until 1899 when it was said to be obsolete. The third lighthouse has a base of 12-inch square oak, cement and limestone. The base is 19-ft. tapering to 14-ft. at the top. Tours are offered on a very limited basis but visitors can walk the grounds.

Presque Isle Downs & Casino is located on 300-acres near downtown Erie. The complex consists of a casino and thoroughbred racetrack as well as the Downs Clubhouse & Lounge, Backstretch Buffet and three bars. The casino is open 24-hours a day with 48 table games, 2,000 slot machines and 100-days of racing. Downs Clubhouse has a view of the track and outstanding menu selections. Presqueisledowns.com

The city has a wide range of activities and historic sites and it is a year round destination. When planning your next jaunt think about Pennsylvania’s quiet star, think Erie. goerie.com

Celebrate the Day of the Dead, Día de los Muertos, on October 31, 2015 at the Penn Museum from 11 AM to 4 PM. The celebration combines new Festivities with cultural traditions. Traditionally the Day of the Dead is a time of remembrance and celebration of the life of those who have passed on because It is believed that one is not truly dead until they are forgotten. The event is free with admission.

“SEX: A HISTORY IN 30 OBJECTS” debuts at the Penn Museum on Saturday, October 17, 2015 and was thousands of years in its creation. The exhibition consists of international art and objects that interpret the concept of human sexuality in world cultures.

The overarching theme, sex, is divided into supporting themes, Love and Sex; Beauty, Desire, and Attraction; Religion and Sex; Gender Diversity, Gender and Society; and Initiation and Ceremony. penn.museum

All you do is take a snapshot of a friend, a pet, an outfit, a view or whatever appeals to you, upload your photos and send them via a free mobile app to the company. After placing an order you will be sent 20 wraps ready for application. nailsnaps.com

WhatsApp allows you to make phone calls in any place or country with WIFI access for free to any other individual with the application on their telephone. The first year is free and each subsequent year cost $.99. Downloads are free. whatsapp.com

Lonely Planet, one of the world’s premier sources for travel information, has just published “Ultimate Travel” listing the 500 most important international sites selected by travel professionals.

The latest in the line of myCharge products designed to keep tech users charged without benefit of copious amounts of wires and plug-in devices to keep up with and the New Line of HUB™ Portable Chargers charges 30% faster than other chargers using advanced Hyper-ChargeTM Technology. It Is made of anodized aluminum and features built-in Apple Lightning, micro-USB charging cables and  built-in wall prongs. Parallel Charging Technology allows users to charge a mobile device and charger simultaneously. Choose your charger at  mycharge.com