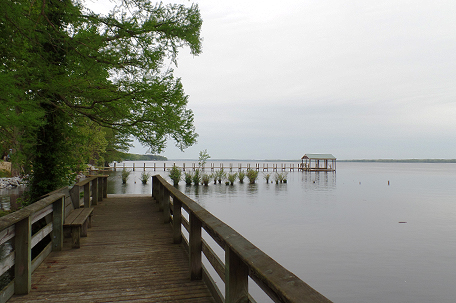 “When they told me my new-born babe was a girl, my heart was heavier than it had ever been before. Slavery is terrible for men; but it is far more terrible for women.”  –Harriet Ann Jacobs

Edenton’s designation as the “South’s prettiest town” is well deserved. Visitors can arrive by land or water and spend a few hours or a few days meandering along the streets, stopping in a quaint shop, dining at a unique eatery or exploring historic sites. Narrated walking, electric boat and trolley tours are offered on a regular schedule and each tour adds another piece to the city’s story. One of the things Edenton does best is tell a “complete” story, inclusive of all its residents, black or white, slave or free, rich or poor and that fact alone makes the city more than just a pretty façade. visitnc.com

A Historic Marker at the shoreline of Colonial Waterfront Park indicates that Edenton is a Maritime Underground Railroad Site, a specific part of the Underground Network to Freedom. Scholars have only recently started to focus on the singular contributions of black watermen to the UGRR and the black community.

Many men of African descent were seafarers in Africa and they brought their skills to the New World. In the early days of colonization captains quickly realized they could get cheap labor by manning ships with slaves and so there was never a time black men were not in blue waters. Originally most black sailors were enslaved but gradually larger numbers gained their freedom.

Life at sea gave the men a certain amount of freedom but they still struggled because of their status and color. One of the earliest documented protests by black mariners occurred in 1780 when a group protested their unequal treatment to the Revolutionary Government. In 1788, another protest was launched, this time against their being kidnapped from ships and sold into slavery.

Black seamen and others who worked around the docks, including women who served as cooks, laundresses and vendors, were conduits of information to the black community as well as assisting fugitives. North Carolina slaveowners recognized the problem immediately and a law was passed in 1793 stating that the penalty for a captain transporting a fugitive out of state was hanging and all harbors and river towns were blanketed with reward posters and newspaper articles filled with warnings.

In 1816, North Carolina attempted to ban all black pilots but owners, realizing the economic implications blocked the ban. In 1830, the North Carolina legislature passed a bill that required that any ship with black sailors be quarantined so that the seamen could not leave the ship and any individual from the black community who visited would receive 39 lashes on the whipping post. * This law was overturned and eight years later the North Carolina State Gov. Edward Dudley posted a $500 reward or anyone helping to identify the mariner who had assisted one of his slave’s in escaping.

The journey from slavery to freedom by water was fraught with special dangers. Fugitives stepped out on faith hoping that they would not be betrayed, that they would not be discovered or that the ship would not wreck on its journey. Bribes were often necessary and hiding places had to be identified because the wait for passage could be anywhere from hours to years. It must be noted that not all black seamen were participants in the Maritime UGRR, nor were those who risked their lives and livelihoods all of African descent.

No individual case better exemplifies the perils of both being enslaved and freedom seeking than that of Harriet Ann Jacobs. Jacobs was born in Edenton in 1813 the daughter of slaves. Her owner, Margaret Horniblow, taught her to read, write and sew. Upon her death in 1825, Jacobs expected to be freed but was instead willed to Horniblow’s 3-year old niece Mary Norcom. Jacobs, in reality, became the slave of Mary’s father, Dr. James Norcom, because of Mary’s youth. Dr. Norcom had attended the University of Pennsylvania medical school and returned to Edenton to practice.

Almost from the moment Jacobs entered the household she became the object of Norcom’s sexual advances and his wife’s intense dislike. She entered into a relationship with attorney Samuel Tredwell Sawyer, who later became a North Carolina State Congressman. The union produced two children, John and Louisa. In 1835, Jacobs fled Norcom’s home for personal safety and to prompt Norcom to sell the children to Sawyer. Sawyer managed, through an agent, to purchase the children and Jacobs’s uncle Philip.

Norcom was led to believe that Harriet left the area but in truth she was secreted in a 9’ by 7’ garret that was 3’ high at the highest point above her grandmother’s shed. While her hiding place was being prepared she was hidden in the home of a white female friend of her grandmother’s, ironically a slaveowner herself, and in the nearby swamp. She would stay in the attic for 6-years and 11-months as family members passed food to her and she watched the world through a one-inch square hole.

In 1842 she was assisted by Peter, a free black man, to the shoreline where she boarded a boat bound for Philadelphia with the complicity of a white captain. After five days in Philadelphia, she took the train to New York where she was reunited with her daughter Louisa but never fully regained her health. Dr. Norcom’s perseverance was legendary and he continued to pursue her until she was purchased and freed in 1852. Harriet Jacobs published her autobiography, “Incidents in the Life of a Slave Girl: Written by Herself,” in 1861 using the pseudonym Linda Brent. She settled in Massachusetts where she and Louisa worked for the abolitionist cause and is buried in Cambridge. 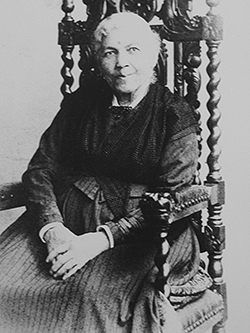 Edenton commemorates the life of Harriet Jacobs with two markers, a North Carolina Highway Historical Marker situated in front of the Historic Edenton Visitor Center and one in front of the Roanoke Lighthouse* honoring her and the Maritime UGRR. An exhibit inside the center displays documents and artifacts relating to her life. A self–guided tour brochure detailing Harriet’s years in Edenton, including 13 sites with maps, photographs and historic information, is available. Most of the sites no longer survive but the tour allows visitors to gain a sense of place.

St. Paul’s Episcopal Church and Churchyard* was the site of the baptism of Harriet’s children. African Americans worshipped there and were seated in the balcony. Dr. Norcom is interred in the churchyard.

Martha Hoskins Blount’s home was located on Queen Street near Broad. Blount hid Jacobs in a room above her own after she left the swamp. Blount and Jacobs’s grandmother were friends.

Located next to the courthouse was the site of Horniblow’s Tavern. Jacobs lived there with her mother until her mother’s passing. She was then sent to live with Margaret Horniblow.

In 1828, after the death of her master, Molly Horniblow was purchased by Hannah Pritchard and emancipated on April 28th in the Chowan County Courthouse*. The courthouse was also the setting for the infamous 1829 decision by the NC State Supreme Court in State v. John Mann. Lydia, a hired slave, was shot and wounded by John Mann when she attempted to flee punishment. Mann had been convicted by a lower court and appealed. The State Supreme Court overturned the ruling stating that slaves are doomed by virtue of the fact that they are slaves therefore masters were not subject to judicial scrutiny if they committed battery against them and to subject masters to criminal prosecution would lessen the hold they had over the enslaved. Justice Thomas Ruffin, who wrote the opinion, was one of the county’s largest slaveowners.

Molly was sold at the Market House then located at S. Broad and Water Streets. The white friend who purchased her did so with money Molly had earned selling baked goods. Jacobs was hidden above the small bakery that Molly opened once she was freed.

Immediately after Harriet’s escape Norcom had her aunt, her brother and her two small children imprisoned in the Chowan County Jail*. Her aunt was held for one month and the remaining family members for two. It was his belief that the suffering of her family would cause her to return.

Edenton Bay Harbor is a designated location on the Maritime UGRR and it is from here that Jacobs, dressed as a sailor, boarded a boat. Looking west from the harbor you can see the “Snaky Swamp.” While waiting for her hiding place to be ready Jacobs hid here and was assailed by snakes.

Providence Burial Ground, on West Albemarle Street, has been the burial site of free and enslaved African Americans for more than 200 years. Molly Horniblow was interred there upon her death. Other noteworthy internments include Jonathon Overton of the 10th Regiment of the Continental Line in the Revolution and Thomas Barnswell, a black businessman and owner of slaves.

A brochure outlining the African American heritage sites, “Community, Family, Church—African American Life in Edenton 1700’s to the Present,” is also available at the Visitor Center. There are 11-sites listed, all within walking distance. Several of the buildings are examples of the work of African American architects, most notably Hannibal Badham, Sr. and Jr.

Kadesh African Methodist Episcopal Zion Church, Edenton’s first black congregation was established in 1857 in Sycamore Chapel. In 1866 they named the congregation the Freedom Church. The current 1897 Gothic Revival church, designed by Badhan, Sr., is the second at that location. The twin-towered, central gabled, structure features 14 stained glass windows and two original chandeliers. It was named in honor of the wilderness oasis where the Israelites rested on their journey to the Promised Land.

Josephine Napoleon Leary was born a slave in 1856 and by the early 1900s she and her husband were prosperous barbers. She would go on to own a home and a number of rental and business properties. In 1894 she constructed a triple-store building to serve as a rental property. The building has an exquisite ornamental metal façade and inscribed in the masonry above the roofline is “J. N. Leary.”

Visitors to Edenton have a plethora of accommodations to select from and each offers something unique. The Granville Queen Inn and the Captain’s Quarters Inn are both B&B’s located in historic homes the Historic District.

The Granville Queen Inn offers accommodations in a variety of architectural styles all furnished with antiques and charming southern touches. Full breakfast and afternoon light buffet is included as are free parking, WIFI and full bath amenities. granvillequeen.com

Captain’s Quarter’s Inn is a Colonial Revival home built in 1907. There are eight guestrooms with full amenities including full breakfast and handicap accessibility. Special events are offered including Mystery Weekends and Rib Smoking Classes. A complete list is posted on the website. captainsquartersinn.com

Edenton, North Carolina has all the ingredients to create a remarkable vacation. Everything you need to plan your trip and make reservations can be found online. visitedenton.com

The Brandywine Treasure Trails Passport is available until September 7, 2015. Passports provide one time entry to each of 11 attractions including Longwood Gardens and Winterthur Museum & Gardens and a summer of adventure, education and sheer beauty. Both individual and family passports are available at the sites and the Greater Wilmington Convention and Visitors Bureau. visitwilmingtonde.com/bmga