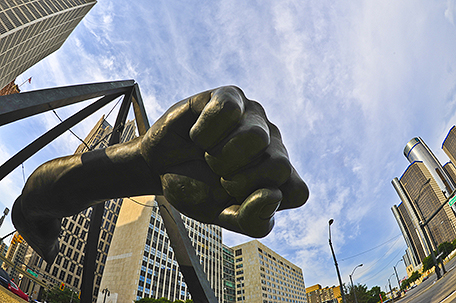 “You took our country from its infancy, into industry and your name still carries with it the idea of a nation built on steel, muscle and sweat.”  –Eminem, “Letter to Detroit”

The first multi-million dollar industry in the New World was the fur trade. As early as 1608, Champlain began to form alliances with Indians to trade furs to Europe and in 1682 La Salle claimed for France all the land drained by the Mississippi and its tributaries. All of the early American settlements were established in locations based on their proximity to transportation to facilitate trade. Waterways and native trails were the first highways and no region had better access than that of an area in Michigan Territory. Lake St. Clair flows into Lake Erie there and the French traders referred to it as “the Strait,” or “Le Detroit.”

Fort Ponchartrain de Detroit was settled on July 24, 1701 by Antoine de la Mothe Cadillac as both a French fur trading post and a barrier to British infringement. The site was strategic because the river was narrow and the bluffs were steep. The original group of colonists consisted of two priests, soldiers, craftsmen, traders and Indian allies. Detroit fell to the British in 1760 and was surrendered to the United States who took control in 1796. A statue of Cadillac’s landing was dedicated in 2001 in Hart Plaza.

Detroit was incorporated in 1815 and during the antebellum period it became an increasingly significant station on the Underground Railroad. The city was called “Midnight” in the freedom code and it was the final stop prior to crossing into Windsor, Ontario. To memorialize the journey and the people, a sculpture in Hart Plaza on the riverbank depicts the figures of six slaves and African American UGRR conductor George DeBaptiste gazing toward Canada as they await transport. “The Gateway to Freedom Memorial,” sculpted by Ed Dwight, is 10’ by 12’. A memorial on the Canadian shoreline captures freedom seekers at the moment of their arrival.

Detroit, from its founding, has been a place where cultures have intermingled, where innovation and creativity have flourished and where people have the ability to revitalize, reform and remake both themselves and the city. This is the perfect time to visit the city and explore its past, present and future and Show Me Detroit Tours offers a comprehensive list of tours that provide glimpses into numerous aspects of the city. Thematic and specialty guided tours are available by reservation. This is a wonderful way to “take a deeper dive into the D.” www.showmedetroittours.com

Buildings have biographies and visitors to Detroit, a showcase for a premiere collection of pre-Depression architectural marvels, can follow the history and heritage of the city structure by structure. The first brick building was erected in 1820 and wealth and prosperity were no strangers to the city from the 1890’s until the early 1930s. This led to a tremendous building boom and the majority of the most noted architects of the era left a legacy in Detroit.  The beauty of each edifice is enhanced by the history and the architecture is so impressive and pervasive that you can begin in any section of the city but I suggest you begin in the Downtown area near Woodward Avenue, the first street illuminated by Thomas Edison with arc street lighting and the setting for portions of Transformers.

Sculptor Marshall Fredericks created the Spirit of Detroit, the city’s iconic sculpture. A man holds a globe, representing God, in his right hand and a family in the left. The marble backdrop stands 45-ft. by 35-ft. The seated bronze sculpture is on a marble base.

My personal favorite piece of public art is the 1986 “Monument to Joe Louis” by Robert Graham. Sports Illustrated gifted Detroit with the very controversial sculpture of Louis’ arm with hand clenched into a fist. The arm is 24-ft. long and is held aloft by bronze poles.

If you have time to visit a single architectural wonder it must be the Guardian Building, Detroit’s Cathedral of Finance. It was originally constructed by the 1927 Union Trust Co. and was known as the 40-story Union Guardian Building. Approximately 1.8-million bricks, in a specially created orange color, were used in conjunction with glazed tile and polychrome terra cotta. Corrado Parducci crafted the exterior carvings and a ribbon of tri-colored terra cotta distinguishes the lower seven floors from those above.

The interior will take your breath away. The building’s design is meant to inspire trust in the customers and to that end certain design elements are reminiscent of a cathedral. The three story vaulted ceiling tops a 150-ft. long lobby with Travertine marble columns the bases of which are rare black Belgium marble. Even more rare is the red Numidian marble also found in the lobby. It was obtained from an African mine that had been dormant for 30 years because it was no longer mined. In order to make the bank quiet a ¾-inch layer of horsehair was placed on the ceiling. A Tiffany clock, one of four in existence, is also on view as well as two stained glass windows featuring Aztec figures. The building was listed on the National Register in 1989. www.guardianbuilding.com

Rivard Plaza is located on Detroit’s International Riverfront, a river walkway from the Ambassador Bridge to Gabriel Richard Park. The 32-mile long Detroit River is the only river with a zipcode and this is the only place where Canada is south of the US. The plaza features outstanding views and photo ops of Canada and the downtown area. It features an inland map of the river, a café and the Cullen Family Carousel. www.detroitriverfront.org 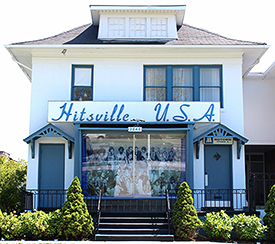 Berry Gordy, Sr. and Bertha Fuller Gordy arrived from Georgia in 1922 for the greater opportunity that the city promised. Gordy, Sr. was descended from a white farmer, the great grandfather of Jimmy Carter, and an enslaved woman. Berry Gordy, Jr. was born 7-years later, one of 8 children. He withdrew from school in the 11th grade to become a professional boxer and after serving in Korea he held a number of jobs until he penned a hit song, recorded by Jackie Wilson, in 1957.

Gordy went on to found the most successful African American company in the country, introduce soul music to the world and profoundly alter the course of American music, culture and race relations. In 1988 he was inducted into the Rock and Roll Hall of Fame and in 2013 he became the first living recipient of the Songwriter’s Hall of Fame Pioneer Award.

In 1959, the Gordy family loaned Berry $800.to establish his company and purchase a former photography studio at 2648 West Grand Blvd. he named “Hitsville USA.” Motown relocated to Los Angeles in 1972 and in 1998 it became part of the Universal Music Group. The Motown Historical Museum was founded in 1985 by Esther Gordy Edwards to preserve and promote Motown’s history and lasting impact.

Tours begin on the exterior where visitors can take photos in front of the building, the “Hitsville” sign and the historic plaque. Of the original eight buildings five remain and the museum is housed inside two adjacent structures. “The Motown Sound,” a 15-minute video provides orientation before you proceed to the second floor. Highlights of these galleries include Stevie Wonder’s harmonica and Michael Jackson’s hat and glove. Jackson visited the museum in 1988 and donated $125,000 and his personal items.

Returning to the first level you pass through the lobby, control room and enter the famous Studio A. This is where many of the hits were recorded and the studio remains 99 percent original. Paul McCartney visited and wanted to play the 1877 Steinway used in the sessions. When he found it out of tune he had it transported and tuned. Wonderful souvenirs are available in “Shop Around,” the museum gift store. www.motownmuseum.org

You can be among the first to visit United Sound Systems Recording Studio (USSRS), the first independent recording studio, meaning it allowed people to record their own music and market it on their own. It was founded in 1933 and has operated continuously since then. The tour begins with a 10-minute film and proceeds into the three studios. Ray Charles, Aretha, Bootsy Collins, the Rolling Stones, Prince, Miles, Muddy Waters, the Parliaments, Whitney Houston and John Lee Hooker, among others have recorded here as well as the first Motown music was recorded here. Stax, at one point, was having financial difficulty and the USSRS agreed to allow their artists to come there. They recorded 31 albums in two months for the Stax label. Studio A is the largest sound studio in the country and most of it is original. This is a working studio that is open around the clock. Tours are by appointment only. www.unitedsounddetroit.com

Bert’s Market Place at Eastern Market is another must while in the city. The manager, Miller London, was Motown’s first black salesman and is depicted in “Motown, the Musical.” Portions of his personal collection are on display throughout the restaurant and event space. The Motown Room is shaped like a music note with booths around the sides. Each booth is dedicated to a Motown act and is adorned with photos, records and individual video monitors that feature performances. A series of murals by Curtis Lewis are located in an adjoining area. One of the murals showcases Motown artists and a second mural highlights important historic figures. Do ask to see the murals! www.bertsentertainmentcomplex.com

Baker’s Keyboard Lounge, the oldest continuously operated jazz club, opened in Detroit n May of 1934 as a diner. Clarence Baker, the son of the owner, worked alone at night and decided to add a piano and some jazz music and the legendary club was born. Baker’s remains an authentic, retro, jazz club that is nearly 100 percent original. The iconic bar, designed in the 50s, is shaped like a keyboard and the 7-ft. Steinway piano was personally selected by Art Tatum. Most of the greats have performed there, Adderley Cannonball, Charlie Parker, Oscar Peterson, John Coltrane, Gene Krupa, Earl Hines, Dizzy Gillespie, Dave Brubeck, Nat “King” Cole, Ella Fitzgerald, Billie Holiday and MilesDavis. The King of Sweden once dropped in to listen to a set and scenes from Whitney Houston’s Sparkle were filmed at the club. Soul food is on the menu, jazz is regularly performed and you can become part of the legend. www.theofficialbakerskeyboardlounge.com

This will be the 36th year for the Detroit Jazz Festival, the largest free jazz festival in the world. Held outdoors in the downtown area, completely family oriented and featuring only jazz, the festival brings aficionados from around the world. The festival will be held Sept 4-7 and the headliners will be announced in April. www.detroitjazzfest.com

The world-class Westin Book Cadillac Detroit Hotel, ideally located for touring the city, offers all of the amenities imaginable. There has been a hotel on the site since 1888 but the Book Brothers purchased the property, razed the hotel, hired an architect and opened the Neo-Renaissance Cadillac Hotel in 1924. The 33-story hotel was, at that time, the tallest hotel in the world. Through the years notables including the Rev. Dr. Martin Luther King, President John F. Kennedy, Elvis Pressley, and the Beatles have stayed there. In 2006, the luxury hotel was renovated at a cost of $192-million. Live like a legend. www.bookcadillacwestin.com

When planning your next trip remember what Martha and the Vandellas said, ”Don’t forget the Motor City.”  You’ll have the time of your life. www.visitdetroit.com