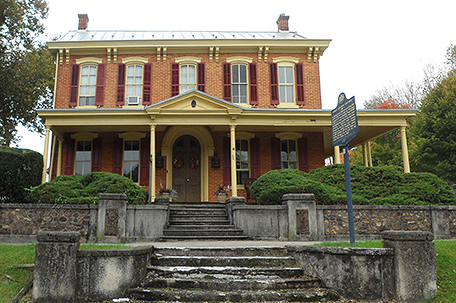 “We would also again bring into your view a plan for the gradual abolition of slavery, so disgraceful to any people and more especially to those who have been contending in the great cause of liberty themselves…..”

Cumberland County has been renowned as an area of transit for thousands of years, beginning with prehistoric Native American groups who established trade and migratory routes. By the time of first contact the Great Warriors Path, as well as several lesser-known trails, were in constant use by the indigenous tribes. They were so well used that individuals would sometimes strip the bark from a portion of a tree and use ochre and charcoal to leave news and messages in pictograph form written there.

Some of the natives’ greatest legacies are the paths that were the foundation of the wagon trails and morphed into our current highway system. These paths had the advantage of being the most direct and level routes. Most significantly, these roads had monumental impact on the history of Cumberland County, placing it at the forefront of French and Indian War, Revolutionary War, Civil War and Underground Railroad (UGRR) history.

Several major UGRR routes ran through Pennsylvania from the South, mainly Maryland and Virginia. Pennsylvania was a natural destination for freedom seekers because the state passed the Gradual Abolition Act in 1780, was in close proximity to slave states, had a history of abolitionism dating from 1688 and had the largest free black population in the country.

Southeastern Pennsylvania’s antislavery sentiments had been problematic since the country’s founding. George Washington is documented as stating that it was very difficult to recover runaways because the population interfered and one of his slaves made a successful escape to the area. The Cumberland Valley provided a port of entry for fugitives and there were a number of individuals willing to render aid. In 1818, Maryland’s Legislature prevailed upon the House of Representatives to sanction Pennsylvanians for aiding fugitive slaves. It must be noted that just as there were abolitionists there were also ardent pro-slavery factions in the state. In 1810 50 percent of the state’s slaves resided in the Cumberland Valley. By 1840 there were only 24 slaves remaining.

In December of 1984 Boiling Springs, Pennsylvania’s Historic District was placed on the National Register of Historic Places. High and First Streets, Boiling Springs Lake, and Yellow Breeches Creek, so named because it turned British soldier’s white pants yellow because of the sulphur content of the water, border the district. A walking tour brochure including maps, information and 22-sites is available.

Yellow Britches Creek, a Pennsylvania Scenic River, is 49-miles long and flows along the south side of Boiling Springs. It is famous internationally as a fly-fishing destination. Yellow Britches Outfitters will answer all your questions and dress you for a successful fishing adventure. www.yellowbreechesoutfitters.com

The seven acre lake, fed by 30 natural springs, was created in the mid-1700s to provide power to the Carlisle Iron Works. The Iron Works was constructed circa 1760 and produced ironware and, during the American Revolution, ammunition and armaments. A stone bridge was built in 1854 to facilitate access to the factory.

Michael Ege, ironmaster, erected the 2 1/2-story Georgian Ege-Bucher Mansion in the 1780s. The 16-room home overlooked the iron works. An interior tour showcases a three story staircase and original handcrafted woodwork and floors although the mansion was modified in 1930. Ege was a slaveowner and his slaves were both ironworkers and house servants. It is believed that some of the slaves were buried on mansion grounds adjacent to the lake.

The Underground Rail Road trail ran from the Mason-Dixon Line to Chambersburg and on to Boiling Springs. Once in the village the freedom seekers would have access to the station run by Daniel Kaufman. Kaufman, the free black community, Kaufman’s brothers-in-law, Stephen Weakly and Mode Griffith and neighbors Philip Brechbill and George Sailor. The Daniel Kaufman House on Front Street was the residence of the architect of the layout of Boiling Springs in 1845. Constructed in 1880, Kaufman resided there until his death and a marker was placed in 2002.

Twelve worker’s cabins were located on “the Island.” Many of the black workers lived there and sheltered fugitives. One resident, James Snowden, was a freeman from Maryland who worked for wages and eventually purchased his entire family and relocated them here.

The site of Kaufman’s UGRR station, his farmhouse and barn, are now on private land. He would accept freedom seekers, feed them and provide shelter in his barn before moving them to Carlisle. When this site proved impractical he sheltered them at Island Grove, a forested area just outside the village. Deep in the woods they were secreted in a log cabin near a spring.

On October 18, 1847, 13 slaves escaped from the Oliver family of Maryland and found a haven in Kaufman’s barn and then transportation onward via his wagon. The fugitives were traced to Kaufman and months later the Olivers sued Kaufman, Stephen Weakley and Philip Brechbill. Kaufman, after several trials, was convicted and fined and made to pay damages at a cost of approximately $5,000. Philadelphia abolitionists and his brother-in-law, Stephen Weakley, paid his debt. Kaufman was an UGRR agent from 1835-47 and at his death he was the county’s last surviving UGRR agent.

Leiditch’s General Store dates from 1846 and is situated on Lot #1. This was the community gathering place and it is here that the townspeople first heard about the fugitives sheltered by Kaufman.

Phillip Brechbill originally constructed Boiling Springs Tavern in 1832 as the Boiling Springs Hotel. In 1902, it was purchased by Anheuser-Busch and owned until Prohibition. The tavern served as an UGRR station and Philip Brechbill was named a co-defendant in Kaufman’s federal trial. He was judged not guilty.

The Keith family have owned and operated the tavern for more than 25 years. Dining here is both a culinary delight and a history lesson. The food is excellent and the hospitality is unsurpassed. Boiling Springs Tavern is open Tues.-Sat. for lunch and dinner. www.boilingspringstavern.net

From Boiling Springs, the UGRR followed a path to Carlisle where there was work and sanctuary among the black workers to be found at the Pine Grove Iron Furnace. Pine Grove Furnace is now a state park and the midpoint of the Appalachian Trail. The iron furnace was built in 1764 to produce cast iron products. Michael Ege purchased it in 1782. The furnace functioned until 1895 and the state purchased the 17,000-acre Pine Grove in 1917. www.dcnr.state.pa.us/stateparks/findapark/pinegrovefurnace

The park features a number of historic buildings and interpretive signs that make self-guided tours possible. The 1829 Ironmaster’s Mansion, Mill and Paymaster’s Cabin are of particular note. Both indentured, free and enslaved blacks worked and lived here. In 1810, of the 30 workers listed 14 were slaves and fugitives sometimes stopped here on the route to Harrisburg. The mansion now offers overnight accommodations and event space. Guided Historic Tours are offered on summer Sundays. wwwironmastersmansion.com

Pheasant Field B&B, Harrisburg Magazine’s 2014 “Simply The Best Bed and Breakfast,” was constructed in 1802. The brick farmhouse was a station on the UGRR and slaves were secreted beneath the floor of the summer kitchen. www.pheasantfield.com

Lincoln Cemetery Memorial Park in Carlisle is the final resting place of approximately 100 African Americans. The cemetery was active from 1840 until 1902 and many of the region Civil War veterans were buried there.

Bethel A.M.E. Church received a historic marker in 2009. This African American house of worship served as an UGRR station and included John Peck, noted black abolitionist as a member of its congregation.

Carlisle’s Old Courthouse is one of the most historically significant buildings in the region. A number of trials took place here that altered antebellum thinking. On June 1, 1847 more than a dozen slaves escaped bondage in Hagerstown, Maryland and traveled north. The owners, James Kennedy and Howard Hollingsworth recaptured three of the fugitives in Shippensburg. They were taken to Carlisle to be held for transport back to Maryland. The judge was informed that a new law prevented him from holding them in jail but released the prisoners into the slaveowners custody. As the owners attempted to move the two women and three men to a carriage the African American community, numbering around 300, rushed the group and a riot ensued. The two females successfully escaped but the male was returned to Maryland. Kennedy was critically injured in the riot and died. The male, a white Dickinson College professor, James McClintock, and 34 African Americans were accused of orchestrating the riot. A protracted legal battle followed that ended in the release of all convicted in the riot being freed by the Pennsylvania Supreme Court to the chagrin of southern slavers.

Albert Hazlett, one of John Brown’s men, escaped from Harper’s Ferry and was later captured near Carlisle on October 22, 1959. Although he claimed not to be Hazlett a hearing at the courthouse on the 29th resulted in his extradition to Virginia. His trial resulted in his execution on March 16, 1860.

One of the things we must always remember about roads is that they travel both ways and just as they brought freedom seekers north they were used to carry them back south. In June of 1863, the Civil War arrived in Carlisle in the Cumberland Valley in the form of the Pennsylvania Campaign. Southern troops swept across the Mason-Dixon and in the course of moving toward Gettysburg troops raided the valley and collected African Americans, some having always been free, to be taken into slavery in the Confederacy. Estimates place the number at greater than 1000. Kidnapping raids, due to Cumberland’s proximity to the South, were not uncommon before the war.

In 1859 a black family, John Butler and his wife and child, were living near Spruce Run. They were kidnapped on June 10, 1859. Efforts to track them led to Emmanuel Myers of Maryland. He was captured in Pennsylvania  and tried in Carlisle in August. He was found guilty but struck a compromise with the court. He agreed to return the Butlers in return for his freedom. His sentence was suspended, he was released and the family was returned.

The award-winning Allenberry Lodge & Resort in Boiling Springs is an ideal location for a visit to Cumberland County. Nestled in a serene and secluded area it provides access to all the regional offerings. Additional amenities include the Allenberry Playhouse. The playhouse has hosted numerous renowned actors and is often cited as where John Travolta got his start. www.allenberry.com

The Cumberland Valley is splendid in summer, wonderful in winter and is great for families or couples. Plan your visit now. www.visitcumberlandvalley.com

Get ready for the holiday season Philly style! Franklin Square’s Electrical Spectacle: A Holiday Light Show will kick off the season with activities and a show every 30-minutes from 4:30-8:00 PM from November 13 – December 31. In addition to the free light show featuring 50,000 lights visitors can have a bite at food kiosks, ride the Lightning Bolt Holiday Express train, kick-back at the winter beer garden, play mini-golf, and shop for handcrafted gifts at the Holiday Market. www.historicphiladelphia.org/franklin-square/holidays-in-franklin-square