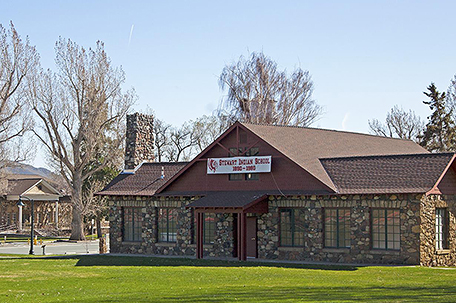 A former Nevada school for Indian children continues its mission of education, but now as a museum and educational center for tribal arts and culture.

The Stewart Indian School in Carson City, Nevada, was opened by the federal government in 1890 with the goal of educating Indian children. The school’s original goals included assimilating the children into mainstream American culture and offering vocational training while discouraging tribal traditions and language.

The school’s mission shifted to an academic focus in the 1960s and it closed in 1980, when it became the property of the state of Nevada.

Today, the state-run Nevada Indian Commission is working to restore many of the historic stone buildings on the 240-acre campus with the two-fold goal of educating the public about the school’s history and providing entrepreneurial and cultural opportunities for Native Americans.

Some building space will house a museum; other areas will include venues for arts, culture, and business development.

Sherry Rupert, executive director of the Nevada Indian Commission, says that the museum and cultural center “offer a new beginning to the campus.”

In the spring of 2019, a new cultural center and museum is scheduled to open in one of the campus buildings. Plans also call for creating a welcome center in a former post office near the museum.

Long-term plans include rehabilitating many of the stone buildings on the campus so they can be functional spaces available for use as places of learning about tribal culture and arts.

The school was also known for strong athletic programs, and renovators hope to restore the gymnasium to its position as a gathering place not only for sports, but for other community social events.

Nevada governor Brian Sandoval was instrumental in promoting the restoration and reinvention of the school.

“The importance of history and culture and what happened here, for better or for worse, it has to be preserved,” Sandoval says.

For more information about the school and museum, visit stewartindianschool.com/museum.