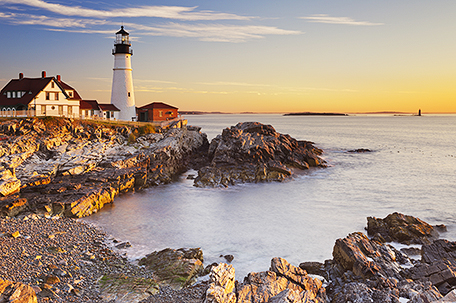 Long before global positioning devices made it possible for ships of all sizes to independently sail with confidence anywhere in the world, lighthouses and lighthouse keepers protected the safety of seafarers. Today, ships use other methods for navigation, but lighthouses remain an important part of America’s maritime heritage. Across the country, lighthouses have been converted into museums, living history centers and even hotels.

“Modern commercial airline pilots couldn’t imagine flying without the aid of a control tower and air traffic controllers,” says Jeff Gales, executive director of the United States Lighthouse Society (USLHS). “In their time, lighthouses and lighthouse keepers were just as important. Their contributions made it possible for cultures around the world to expand across oceans and seas and safely return to land, guided by the lighthouse’s beacon.”

Each year, thousands of visitors learn about lighthouses and their storied pasts, gaining a new appreciation of their uniquely majestic architecture.

“With hundreds of lighthouses along both the Atlantic and Pacific coasts, and on inland waterways such as the Great Lakes, it’s easy for many Americans to find a lighthouse that’s within reasonable traveling distance from home,” Gales says. “A lighthouse visit truly has it all – history and adventure, romance, scenic beauty, and family appeal.”

SeaPak Shrimp & Seafood Co. has partnered with the USLHS to support lighthouse preservation and education. In conjunction with the release of its new Lighthouse Selections line of frozen seafood products, SeaPak is pledging $10,000 to the USLHS. The grant will go directly to preservation efforts already underway at the fabled Morris Island Lighthouse, which has long guarded Charleston Harbor in South Carolina.

To inspire you to visit a lighthouse this summer or fall, the USLHS and SeaPak have teamed up to share these fascinating lighthouse facts, along with some useful lighthouse tourism information:

•  Historians believe one of the first known lighthouses was built in Egypt, nearly 300 years before the birth of Christ. “The Pharos of Alexandria” lighthouse was said to be more than 440 feet tall and guided ships to the city’s harbor for more than a thousand years before earthquakes destroyed it in the 14th century A.D. The Pharos is remembered as one of the Seven Wonders of the Ancient World.

•  Despite the creation of other navigational technologies, many operational lighthouses still exist around the world. Most have been automated, but some are still “manned” by a lighthouse keeper. In the U.S., only the Boston Light on Little Brewster Island in Massachusetts is still staffed. It is the oldest continually operating lighthouse in the country.

•  Each lighthouse has a unique light signature that helps mariners identify it. For example, a lighthouse may flash its light once every seven seconds, while another miles away on the same coast flashes its light every 10 seconds. The different flashing patterns help sailors know which lighthouses they’re passing in the dark of night. Lighthouses also are painted in distinctive patterns and colors, to ensure they’ll be a visual signal for mariners during the day, as well.

•  Because they’re located in coastal areas, lighthouses are often found in communities that have a lot to offer tourists. A lighthouse visit can be the pinnacle of a trip that also includes dining in nearby restaurants, shopping, day cruises, stops at other historic sites, and additional family friendly activities.

•  Throughout the summer and fall, lighthouses along America’s seasides and inland coasts are the focal point of festivals. For example, the lighthouses of Wisconsin’s Apostle Islands on Lake Superior host a celebration every year in late August and early September; two dozen historic Maine lighthouses are open to the public on Maine Open Lighthouse Day (which this year falls on Sept. 10); and, in New Jersey, the annual Lighthouse Challenge weekend (this year on Oct. 15-16) encourages people to visit all of the state’s participating lighthouses on the Atlantic Coast.

•  You can easily book a lighthouse tour that comes with behind-the-scenes insights into the history and operation of a lighthouse. In some cases, you may even be able to stay in the lighthouse keeper’s quarters and assume some honorary duties!

“The history of the lighthouse is almost as old as human history itself,” Gales says, “and while the 300-year era of manned lighthouses in the U.S. has ended, lighthouses remain a precious symbol of our maritime heritage.”

Short on travelling cash for a vacation?