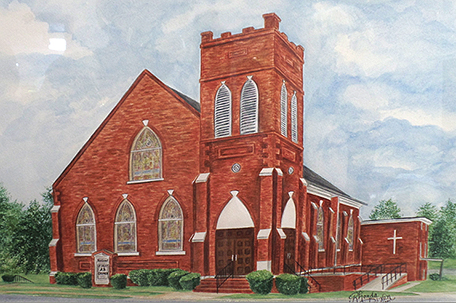 Evans County, created in 1914, once Creek Indian land, was named after a Confederate General. Claxton, the county seat, was established when the railroad came in the 1890s and the Hendricks family offered land to people willing to settle there. Today Claxton is recognized as the “Fruitcake Capital of the World.”  @exploreGeorgia

Fruitcake was eaten in Ancient Rome and carried by knights on crusade because it lasts for 12 to 18 months. Liquor was added and in parts of Europe it was banned in the 1700s because it was considered immoral. Americans once considered it a sign of wealth because it required the inclusion of fruits that were costly or difficult to obtain.

Two of the cities internationally famous fruitcake companies welcome visitors and shoppers. The family owned Claxton Fruitcake Company has been in operation since 1910 and they sell 3-million pounds of fruitcake annually. Alcohol is added to the batter and mixed 375-lbs. at a time in a modified cement mixer. claxtonfruitcake.com

Georgia Fruitcake Company was established in 1917. They mix 1000-lbs at a time and flavor their cakes with Evan Williams bourbon. They sell local products and baked goods in their store and everything is freshly made. Their cheese straws are especially delicious. georgiafruitcakecompany.com

Harry’s BBQ and Grill is a local and visitor favorite. It began as a grocery store and gas station in 1956 and the transformation to a restaurant resulted in pit barbecue delights, cooked over oak and pecan, doused in 60-gallons of sauce weekly. The current restaurant was completely hand built and everything is made in-house.

Toombs and Montgomery are adjacent counties that have banded together to offer agri-tours that provide visitors an opportunity to learn about and participate in the growing of the multitude of crops in the counties. Tours are seasonal. georgia-agritourism.org

Terra Dolce Farms has returned to producing a crop that the earliest settlers found growing on Spanish land but olive trees lost favor and other crops replaced them. Terra Dolce, sweet earth, is now producing award-winning olive oil that is hand processed from plant to product. terradolcefarms.com

If you don’t have time to take the full tour a stop at Pittman’s Family Farm and Produce Market will provide a great overview. Their farming tradition began in the 1930s and eventually a store was added. Today the 4th generation grows and sells 40 produce varieties and the store carries Georgia Grown products. Tours are offered. pittmansfamilyfarmandcountrymarket.com

Georgia’s Official State Vegetable is the Vidalia Sweet Onion and The Vidalia Onion Museum is devoted to telling its story through videos, dioramas, artifacts and photographs. In 1986 the “Vidalia Onion Act of 1986” trademarked the name and stated that they could only be grown in 20 counties in Georgia.The 1,300-sq.-ft. space relates the history  of this sweet onion as well as its place in pop culture. Prominently displayed in the first gallery is the story of Ed Tensley, an African American college graduate sent by the government to share modern agricultural techniques with local farmers and introduce crop rotation into the area. He planted some of the regions first onions, employed all races on his farm and is credited with donating the first school bus used to transport black children.vidaliaga.com

The Vidalia Onion Festival has been held since 1978. Signature events include concerts, the Onion Run and the Vidalia Sweet Onion cook-off. vidaliaonionfestival.com

American Revolutionary Colonel John Laurens is the namesake of 812-sq.-mile Laurens County established in 1807 and Dublin, the county seat, was platted in 1812. The postmaster named the town after his wife died and he wanted her to rest in Dublin, her ancestral home. The county overwhelmingly voted to remain in the Union but later sent 124 men to war, 11 returned. The African American population of the county exceeded that of whites because of the number of plantations within its boundaries. Dublin has actively worked to preserve its history, the walking tour includes 50 sites and the Laurens Heritage and Culture Center presents a comprehensive overview. visitdublinga.com

First African Baptist Church will be the location of the new MLK Monument. The monument is designed to educate and encourage reflection and will be located at the entrance to the historic district. The church was founded in 1867 but the current church dates from 1914. On April 17,1944, Martin L. King, Jr., in an oratorical/essay contest, presented his first public speech, “The Negro and the Constitution.” A small museum inside the church displays objects related to King and an exterior plaque interprets the importance of this site. firstafricanbaptistdublinga.com 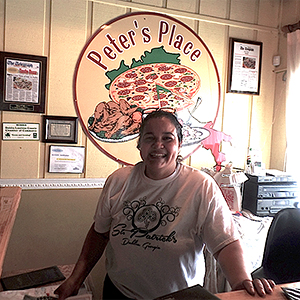 We can gain unique information from cemeteries and there are three that are worth touring in Dublin. The Old City Cemetery dates from 1811 and the races were intermingled. Northview Cemetery was the city’s whites only burial place and contains the graves of many early Dubliners.

Cross the Creek Cemetery was established on 21-acres in 1906, as the second African American cemetery, on the edge of Hunger and Hardship Creek. The cemetery contains approximately 2,000 internments, many unidentified and lacking headstones. It is currently being restored and white crosses designate identified gravesites. The grave of Sugar Ray Robinson’s grandmother bears a marker that he purchased for her. Around 70 people resting here were once enslaved including William Horne. Horne was 55-years old when slavery ended. He died in 1925 at the age of 115.

Dublin is more than history and on June 8th they will host their first 1-day acoustic music festival. It will feature only artists from the area.

Peter’s Place is a casual and affordable restaurant where everything is made in-house. It hosts live music events and is pet friendly.

Company Supply features all natural creole and Cajun cuisine created to delight your palate. It is rated as one of the city’s best restaurants.

Page House B&B is situated in a mansion in the historic district on Millionaires Row. The rooms offer modern amenities in a historic setting. There is a restaurant on site. pagehousebb.com

Union Bound is a movie for our time that is currently enjoying limited release. Based on the journals of Joseph Hoover, it relates the story of a Union POW who escapes and flees to freedom with the assistance of freed slaves. Screenings may be accompanied by opportunities to delve deeper into the story. Information is available online.  unionboundthemovie.com

Georgia, more than ‘Gone With the Wind’ (Part One)