Chicago: The power of art, creativity and design 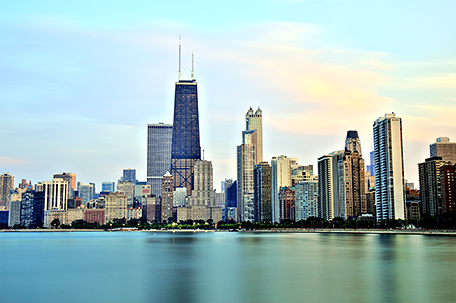 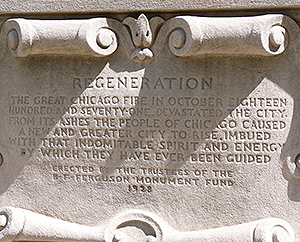 Chicago is known as the “Second City” because on October 8, 1871 the Great Chicago Fire destroyed the “first” city, leaving a $200-million trail of devastation  four miles wide and a mile long. Contrary to popular belief, Mrs. O’Leary’s maligned cow did not start the fire that burned for two-days and left 300 dead.

The ruined city was a blank canvass for innovative designs, emerging architectural techniques and boundless creativity. Chicago has maintained its reputation as a center of art, architecture and design since then.  (#ChooseChicago) 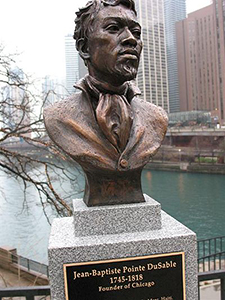 In the late 1770s, Haitian Jean Baptiste Pointe DuSable, the French-educated son of a French sea captain and an African slave, traveled to the northern shore of the Chicago River to a place the Native Americans called Eschikagou, or the “place of wild onions.”

He befriended the natives and established the first permanent settlement,  a trading complex that consisted of a five-room house, bakehouse, barn, dairy, mill, smokehouse, stable and outbuildings.

He established a business, the first in the original city, and is considered the founder of Chicago, and it’s first art lover and creative builder.

The Native Americans ceded land on the Chicago River in the 1795 Treaty of Greenville, and in 1808, work was begun to construct Fort Dearborn. In 1812, the fort was attacked and abandoned. In 1816, the army reconstructed it and stayed until it was outdated and then demolished in 1857. The site is noted with a bronze plaque at Michigan Avenue and Wacker Drive. 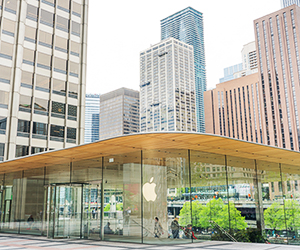 The Chicago Architecture Center has a new home at 111 E. Wacker Drive. Its mission is to preserve, protect and educate and it serves as a perfect orientation to the interconnected impact of architecture, history and design.

Your experience here includes the Chicago Gallery, Skyscape Gallery, 3D Chicago City model and a menu of tours from which to select. Open House Chicago, Oct 13-14, 2018, is a free event highlighting neighborhoods with entry into architectural treasures.  (www.architecture.org.) 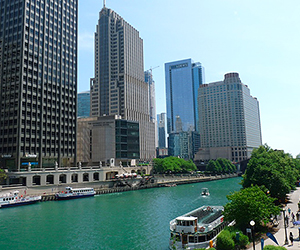 Chicago’s Riverwalk is a 1.5-mile canyon that runs through the heart of downtown. The area along the river was repurposed to enhance dining, entertainment and recreational activities including touring, fishing, kayaking and strolling.

Portions of the walkway between bridges are divided into plazas designated as “rooms”. Activities tend to be family-oriented, free and feature performances, parades and fireworks.

Chicago First Lady Cruises’ Chicago Architecture River Cruise is an absolute must. This 90-minute narrated tour showcases the significant structures and events from DuSable to the present. Highlights include 25 bridges, the Willis Tower, for 23 years the world’s tallest, the world’s first skyscraper and what was the largest post office in the world.

The tour begins with a view of the new two-story, glass walled, Apple Store, complete with Riverwalk seating and a roof that resembles a laptop cover. It is situated on the site of DuSable’s home. There are numerous photo ops and outstanding views.  (@CFLCruises)

History on Tap is another essential guided tour. On this tour of pubs, breweries and distilleries, guests learn Chicago’s history and culture through the lens of local spirits. The venues may vary but a stellar inclusion is the 1881 Twin Anchors, a local establishment that was a speakeasy and a favorite haunt of Frank Sinatra. Still visible are Sinatra’s private telephone and the hidden speakeasy door.

The bar is famous for its ribs and has 15 beers on tap. It has been featured in movies including “The Dark Knight.” Tour reservations are necessary.  (www.historyontap.com) and @historyontap) 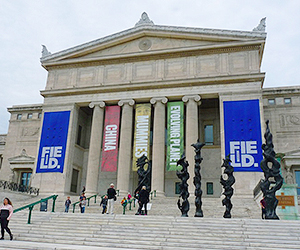 Art on the Mart, the world’s largest digital art display, will be projected on the façade of the Merchandise Mart beginning in October. This 34-projector permanent exhibition will encompass 2.6-acres, 5 days a week, 10 months annually. Artists can submit their work for consideration.

Chicago does not just focus on outdoor experiences.  There are a number of outstanding museums that jettison a visit into the realm of the extraordinary.

The Field Museum was founded in 1893. Currently less than one percent of the collection is on view. As it is their 125th anniversary, they are mounting a number of new exhibits. “Journey to Antarctica” allows visitors to interactively explore the continent with a team of researchers.

A 122-ft. long cast of Maximo, a Titanosaur cast, is positioned in the lobby so that you can touch and walk beneath it, the largest animal to have ever lived. It is based on six dinosaurs and authentic fossils from Patagonia are displayed nearby.  (www.fieldmuseum.org and @fieldmuseum) 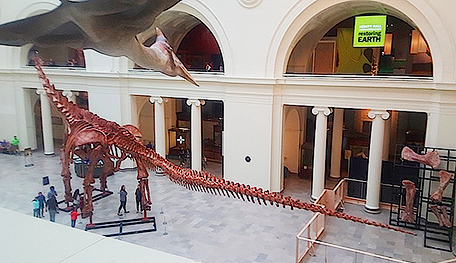 The American Writers Museum is unique. The self-guided tour starts with a brief video, “Nation of Writers: A Media Experience” and proceeds to a timeline from 1490 to the present. There are several interactive stations, videos and a book lover’s gift shop. There are more than 7,000 restaurants and more than 65 craft breweries in Chicagoland.  When given a choice, go for something slightly different and really special. (@Americanwritersmuseum)

Le Colonial is reminiscent of a 1920’s French Colonial restaurant with a dining room and sidewalk café. It specializes in Southeast Asian cuisine. (@lecolonialchicago)

Chef Katsuji of Barrio has created a menu of traditional Mexican fare with American flair.  (@barriochicago)

With more than 250 theater options visitors can have a personalized theatrical experience. One of the best choices is The Yard at Chicago Shakespeare Theatre. Nine mobile towers and air skids allow various configurations and seating from 150-850 making this an architectural marvel.  (www.chicagoshakes.com)

A cultural and artistic trip requires appropriate accommodations.  Nothing evokes elegance and refinement like the AAA-Five Diamond Waldorf Astoria in the Gold Coast area. The accommodations are luxurious and the service is exemplary.  There are two Michael Mina Signature Restaurants and a 14,000-sq. foot spa.  (@waldorfastoriachicago)

Make your vacation even more cost effective with the purchase of a CityPass. Purchasers bypass the lines and gain entrance to five of Chicago’s premiere attractions with a 53% saving.  (www.citypass.com)

Grand American Adventures has crafted a dream tour of Wyoming’s “Yellowstone and Teton In-Depth” for lovers of adventure, geology, history, photography and wildlife. This small group tour is led by a knowledgeable tour guide and joined by local experts along the way. Accommodations are unique and luxurious and include glamping teepees. Highlights of the 6-day tour include Mammoth Hot Springs, Opal Pool, ‘America’s Serengeti’ Lamar Valley, Jackson Hole and Jenny Lake. (www.grandamericanadventures.com/pacific-northwest-tours/in-depth/yellowstone-grand-tetons)