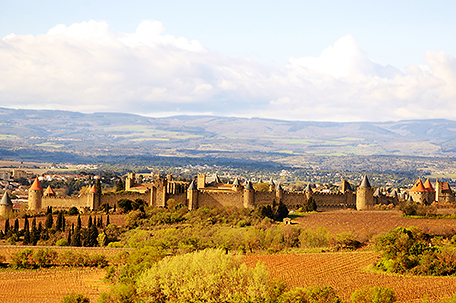 ABOVE PHOTO:  View of medieval town of Carcassone (France) through vines and fields at sunset. (Photo: Shutterstock)

CARCASSONNE, France — Somewhere at the intersection of fantasy and history stands the medieval city of Carcassonne, a castle-on-the-hill getaway in the south of France.

The Cite, as the walled-off hilltop section of Carcassonne is known, has been a strategically important hub for millennia. It was the stomping ground of Romans, Visigoths and Saracens and saw long bloody battles as borders and allegiances shifted.

Tourists streaming into the Cite get a taste of the mythology at the gate, where a reproduction bust of the Carcassonne’s purported namesake, Lady Carcas, stands. The eighth century figure is said to have ended a years-long siege by hurling a fat pig over the city’s walls to convince the invaders that the food-starved city could afford to waste such an animal. When the ploy paid off, the overjoyed Lady Carcas rang the city’s bells. Sonne means sound in French, so the city was named Carcassonne.

That tale is as tall as Carcassonne’s towering Roman walls (the name actually dates back to Roman times, its earliest known use came in 70 B.C.). The bust is a stone-faced reminder that the “Sleeping Beauty’’ castle look-alike has picked up some embellishment over time.

Despite some of the kitschy throwbacks to knights in suits of armor, there are plenty of reasons to visit this UNESCO World Heritage Site and its 52 towers. Here are just a few.

Carcassonne’s Cite was bedeviled by slums in the 18th century when a historian and architect partnered to save it from demolition. Since then, some of the rebuilding of its ancient walls was painstaking in its attention to detail, while other revamping strayed from the textbooks. The result is a mix of hardcore history alongside tourist shops hawking plastic swords.

Some highlights include the Gothic Basilica of Saint-Nazaire, which features 700-year-old stained glass that was disassembled and hidden from the Nazis in the surrounding mountains. A church has existed on the site for at least a millennium and traces of its Roman-era past still exist. 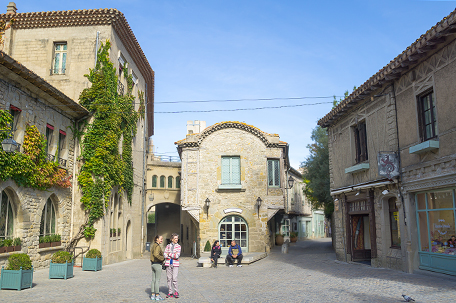 The Cite’s Comtal Chateau is a fortification within a fortification, a last line of defense guarded by high towers and a trench. The museum there offers historical insights paired with a view that on a clear day stretches to the Pyrenees. It tells the tale of the Cite’s rebirth after it slid into disrepair and also offers the only access to some of the ramparts, including a stretch that overlooks the Cite’s century-old theater.

There are a smattering of other sites throughout the Cite, including centuries-old wells and the Museum of Torture.

A visit to the city in the south of France is incomplete without a jaunt into its vineyard-strewn countryside. The Languedoc region is famous for its wine, but also sprouting up from that fertile soil are the remains of ancient castles.

The most famous of the so-called Cathar Castles, named after a religious sect that was the target of one pope’s crusade, is Las Tours. The site is a short and charming car ride away from Carcassonne. The oldest settlement there dates back 1,500 years and four castles remain today.

A trail leads to each tower, which resemble rook chess pieces set atop a steep hill. While on high, it’s easy to understand why the site was chosen: It offers 360-degree views of the valley below. The remnants of a village wait at the end of the hike, where short stone walls mark the footprints of former homes and workshops.

Don’t let the gauntlet of tacky souvenir shops fool you. Carcassonne is home to some sophisticated French fare.

The region is known for its hearty cassoulet, a stew of white beans and meat. The dish is featured on most of the menu boards throughout the Cite. Also on those multi-course menus are decadent foie gras-based dishes and elaborate chocolate desserts (one such concoction includes a chocolate ball that opens up to reveal a chocolate mousse as melted chocolate is poured over it). Even the ubiquitous gelato shops are worth a coneful, there’s nothing like lapping up a cassis-flavored treat while lapping up the sights.

Eating within the Cite’s walls does come at a price, however. Better bargains can be found just beyond in the town center.

GETTING THERE, GETTING AROUND: Carcassonne is roughly a six-hour train ride from Paris, which will include a transfer. Tickets can be found here: https://en.voyages-sncf.com/en/. A tiny airport used exclusively by budget airline Ryanair is a 10-minute drive from the city center. And Carcassonne can also be reached using Toulouse’s larger airport, about an hour away. The city is small enough to walk to all the sites. For adventures farther afield, it’s easy enough to rent a car.

Halloween treat: A night at Dracula’s Castle in Transylvania