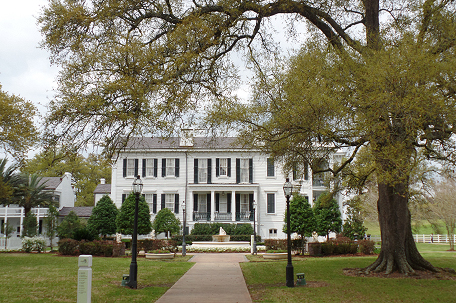 “Somewhere lives a bad Cajun cook, just as somewhere must live one last ivory-billed woodpecker. For me, I don’t expect ever to encounter either one.”

Lake Pontchartrain Causeway, the world’s longest bridge over water, is one of the world’s architectural wonders. It is actually two parallel two lane bridges with 5,189 concrete trestles, constructed at different times. The first bridge was completed in 1966 at a cost of $30,677,000. The second bridge, completed in 1969 is actually 1/100 of a mile longer making the structure 23.87-miles long. It is a wonderful, scary, 30-minute drive north from New Orleans to Baton Rouge. thecauseway.us

It appears that all roads can lead to Baton Rouge and so in order to taste the flavor of Cajun Country you must travel southwest to any of Louisiana’s 22 parishes known to interpret the heritage and culture of the French Acadians. They were exiled from Canada from 1755-58 when it fell to British rule and settled in several colonies including Louisiana between 1765-85. They made their homes in Spanish territory in west Louisiana and were the largest group but mixed with other cultures, African and Caribbean slaves, Indians, Spanish, Germans, etc., and thus Cajun culture represented one of America’s earliest melting pots. The word “Cajun” is a derivation of the word Arcadian.

Early Cajun settlers lived on what was considered less than desirable, isolated, land partially because they had no wish for official interference. They were taught skills by the indigenous tribes and learned to live off the land. Their communities thrived in isolation and allowed them to maintain their language and religious practices.

Cajun Pride Swamp Tours provides a wonderful orientation in Cajun culture. Located 25 miles from New Orleans within a privately owned wildlife refugee visitors can explore Manchac Swamp and bayous teeming with wildlife. Boat trips are fully narrated and filled with history and biologic and geologic information. Highlights of the tour are animal and reptile sightings and photo ops, an opportunity to see a reconstructed home, a haunted cemetery and the chance to hold a baby gator. The captains are all bonified Cajuns and I highly recommend this experience. cajunprideswamptours.com

Nottoway Plantation, the largest plantation house remaining in the South, is listed on the National Register of Historic Places (NRHP). The “White Castle of Louisiana” was built in 1859 for wealthy sugar cane planter John Hampden Randolph of Virginia. Originally 1020 acres, the 22 acre site offers guided tours of the 53,000-sq. ft. mansion and self-guided tours of the gardens daily.  The family owned 155 slaves and much of the labor on the house was completed by them. In 1899, the house was auctioned for $100,000. 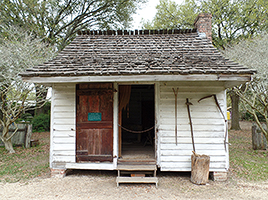 The mansion has 64 rooms, 27 closets and is filled with antiques with the only original furnishings on the second floor. The gasoliers and cypress flooring is original as are the handpainted plates trimmed with 24kt gold in the formal dining room, When the plates are placed in a specific order they tell a story. The highlight of any tour is a visit to the Cypress Ballroom. This exquisite room was painted completely white so as not to clash with the ladies’ ballgowns during a dance.

Nottoway is now a AAA Four Diamond Award winning resort with 40 accommodations and two honeymoon suites all with the veneer of southern dependencies but offering modern amenities and an outdoor pool. It is handicap accessible and can be booked online. nottoway.com

While Nottoway provides an entré into the world of the ante bellum ultra wealthy, a visit to the Rural Life Museum explains daily life in the 18th and 19th centuries. The museum complex consists of 30 buildings at the LSU Agricultural Center including buildings situated to form a pre-Civil War Plantation Quarters exhibiting slave quarters, overseers house and sick house. The 25 acre Windrush Gardens features heirloom plants and 19th Century gardens.

Plan to spend a significant amount of time here and begin with the five minute orientation video. Indoor exhibits in the Exhibit Barn section of the visitor center have one of the most comprehensive displays on slavery I have ever seen and it was the first museum in the state to do so. A complete schedule of programs and activities is available online. sites01.lsu.edu/wp/rurallife

Baton Rouge, the second largest city in the state, was established in 1719 as a French fortification. The area had been known as Baton Rouge, “red stick,” for 20 years, named by French explorer Pierre Le Moyne, Sieur d’Iberville. The natives, who lived in the area for nearly 10,000 years, used a red cypress devoid of bark as a boundary between tribal hunting grounds. In 1849, the city became the state capitol. During the Civil War Union forces occupied it in August 1862. The capitol was moved to New Orleans during the war but was returned to Baton Rouge in 1882. visitbatonrouge.

The award-winning Gothic Revival Louisiana Old State Capitol s a mandatory stop on our whirlwind statewide tour. Some believe that its site atop the bluffs above the Mississippi is the same spot where the expolers first saw the red stick. The building was designed by James Harrison Dakin to resemble a cathedral. In the 1880s, the spiral stair and stained glass dome were added. A New State Capitol replaced the old one in 1932. Visitors can explore the stunning architecture and view the outstanding 12 minute film, “Ghost of the Castle,” with Disneyesque special effects. louisianaoldstatecapitol.org/museum

In the shadow of the New State Capitol stands the 69,000 sq. ft. Capitol Park Museum. Two permanent exhibits, “Grounds for Greatness: Louisiana and the Nation” and “Experiencing Louisiana: Discovering the Soul of America,” get to the heart of all things Louisiana in 19 galleries. All of the exhibit spaces are thematic and many are interactive. Highlights of a tour include a shrimp boat, slave pen replica, a Confederate submarine and the Louisiana Dancehall and Music Gallery.

The Art Deco Louisiana State Capitol, the tallest in the nation, stands 450 ft. tall, boasts 34 stories and sits on 27-acres. It was completed in 1932 at a cost of $5 million under the governorship of Gov. Huey P. Long. Three years later Long was assassinated inside the building and was buried in the Capitol Gardens and a memorial statue of Long facing the building was erected. The observation deck is free and provides a panoramic view of Baton Rouge.

Huey Long was a legend, at least in his own mind and he was certain that he would one day be President of the United States. In 1930, he oversaw the construction of a Governor’s Mansion that replicated the original Georgian White House. He wanted to practice moving about inside so that once elected he would not fumble around when he got there. The mansion was used until a new one was constructed in 1953.

A fun and interesting way to dine in Baton Rouge is to take the C’est Si Bon Food Tour. It includes eight restaurants, each serving their signature dish or drink. The guided tour is filled with historic and culinary information, anecdotes and lots of photo ops. It is an easy 2.5 hour, one-mile, walk. Reservations are necessary. Batonrougefoodtours.com

Monroe-West Monroe was originally the site of the Spanish Fort Miro established by Don Juan Filhiol in 1791. In 1819, the name was changed to Monroe in honor of President James Monroe. monroe-westmonroe.org

During WWII, they asked American soldiers what they missed most. Mom, of course came in first, but Coca-Cola ranked right up there. An Atlanta pharmacist created the medicinal concoction in 1886 and promptly sold five glasses that year. The business was sold to Asa Candler whose promotional skills made the drink popular but it was still sold from dispensers.

In 1894, Joseph Biedenharn of Vicksburg, Mississippi thought of bottling the drink and he sent 12 samples to Candler who was not enthusiastic. In 1898 Candler requested Biedenharn’s help with the process. In return Biedenharn was given exclusive rights to bottle the drink in four states and became the first independent bottler. In 1910, he and his family moved to Monroe, Louisiana. Biedenharn’s residence is now a three-site complex that includes the home, a Bible Museum and the gardens.

Tours begin in the visitor center with a 10 minute orientation film and a comprehensive history of Coca-Cola bottling. On display are examples of early bottles including the rare “cobbleskirt” bottle that was easily broken because at that time no dividers were placed in the cartons. The original 1915 Root Glass Company designed bottle based on the shape of the cocoa pod is also on view. This trademarked bottle went from a painted logo to an embossed one.

The Bible Museum is filled with gems artfully exhibited. A focal point is an 1848 facsimile of the 1648 Wycliffe Bible that sparked Emmy-Lou Biedenharn into becoming a lifelong collector. Other highlights are sculptural renditions of the Stations of the Cross, a leaf from a Gutenberg Bible and an original 1611 King James Bible. www.bmuseum.org

Monroe has created the “Official Duck Commander Hometown Tour.” It consists of 26 local hangouts and sites seen on the show. It should be noted that the seats used in the television show in “Haskell’s Donuts” are signed. The highlight of the tour is a visit to the Duck Commander Store and Warehouse. This has become a destination for international travelers and there is no telling who might be there. duckcommander.com

The Cotton Port District of West Monroe is a shopper’s delight and well worth a detour. Trenton Street, the main thoroughfare, and the side streets represent the most concentrated area of antique shops in the South. There are more than 40 purveyors of antiques as well as craftsmen, restaurants and specialty stores. antiquealleyshops.org

Warehouse No. 1 Restaurant, voted Best of the Delta, is located in Monroe on a site overlooking the beautiful Ouachita River. Specialties include Cajun Tilapia, Redfish Louisianne, jalepeno cheese grits, corn and crab bisque and other traditional Louisiana cuisine. warehouseno1.com

The St Landry Parish Visitor Center was constructed in 2011 to provide visitors with information and to promote green and sustainable construction techniques blended with traditional design. Displays inside and along a boardwalk introduce travelers to the ecosystems, cities, culture and historic structures in the region. cajuntravel.com

The Hampton Inn Baton Rogue Downtown is a natural choice for accommodations on this leg of our journey. The newest downtown hotel, is within walking distance of major attractions and offers 137 guestrooms with every amenity you could desire including free hot breakfast and internet. Most rooms have great river views. hamptonbatonrouge.com