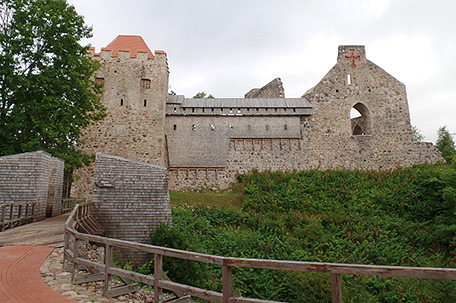 “If you go only once round the room, you are wiser than he who sits still.” —Estonian Proverb

The driving distance, on well maintained roads, between the two Baltic capitals, Tallinn, Estonia and Riga, Latvia, is 172-miles and there is much to see and do along the route. Visitestonia.com

Pärnu, Estonia sits at the midpoint between the two cities. It was first documented by that name in 1251 although there is ample evidence of habitation for more than 11,000-years. The area can credit the presence of two rivers for the founding of the port cities Vana-Pärnu, Old Pärnu on the right shore of the River Pärnu and Embecke, New Pärnu on the left. This same water access facilitated the city’s inclusion in the Hanseatic League in the 1300s. parnu.ee/lang/eng

In 1838, the first public bath and spa opened and by the end of the century Pärnu had become a Russian imperial resort visited by the tsar’s court and later a favorite Soviet resort. Men and women bathed separately by taking bathing bridges, a distance apart and different lengths, to reach the water. The first co-ed bathing beach, known as “Paradise”, opened in 1924. Today it is a beach town extraordinaire with a 105-mile county coastline of white sand and shallow water and there is a complete menu of water-based activities from paddling out to a nearby island to kayaking and yachting to the sea. The beach promenade is lined with trendy restaurants, wellness facilities, clubs, shops, a park and waterfalls. 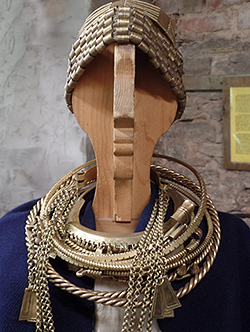 Pärnu is Estonia’s summer capital and is renowned internationally as a health, wellness and sauna destination. The menu of treatments is endless including the historic mud baths, traditional treatments and, for a wallow in self-indulgence, a gold massage. Services are holistic, luxurious, therapeutic, beautifying and restorative.

Generally spa history is traced to the baths of Ancient Rome where people attained “health by means of water.” “Sanus per Aquam.” The baths were not only for treatment but also meeting with friends and relaxing and very little has changed through the centuries. The Estonia Resort Hotel & Spa is an ultramodern 106-room facility that offers state-of-the-art accommodations including SleepAngel™ pillows that block allergens, bacteria and viruses. Experts recommended that guests should try both different massage techniques and masseurs to gain maximum benefit and the resort menu features more than 60 treatments ranging from $15- $70.00 and a Dead Sea Pool. The building opened in July of 2015 and is designed to accommodate people with disabilities and offers specialized services for men and children. spaestonia.ee/resort/en

A sister property, the Estonian Medical Spa & Hotel, one of the largest medical spas in the country, has a number of unique packages including Laughter Yoga and dental services. spaestonia.ee/medical/en

If your spa preferences run to the slightly different or you desire a more intimate, yet authentic spa experience, the Lantus Country Spa in Latvia is just the place. This beautiful complex consists of several separate lodgings, dining facilities, bucolic activities and views and a traditional Latvian sauna. The main house was constructed in 1926 and recently underwent a three-year renovation. Lantus also hosts nuptials and reunions. laukumaja.lv/en

With one quarter of Estonia having been designated a nature reserve, woodlands making up 50 percent of the land and five national parks and many preserves is there any wonder that it is an outdoor lover’s paradise. Because Estonia is an all-season destination visitors can engage in wildlife and bird watching while participating in nearly every outdoor activity known to man. On the route to Latvia take time to stop at Soomaa, established as a national park in 1993.

Soomaa (Marshland) NP was created to preserve and protect the natural and cultural diversity of the region. The earliest settlements date back to the Stone Age but it was not until 1588 that it was listed in the Atlas of Livonia. The Pauna Hiking Trail winds you through Tipu Village where you can see the school and a farmstead that typify life in the area.

The Beaver, Kuuraniidu and Riisa Nature Trails are the most popular and are used by hikers to see the five bogs, five rivers, more than 100 species of flora, 30 of which are protected, 43 species of mammals and 183 bird species, 78 of which are protected. A walk along the two-mile Ingatsi Boardwalk leads you to the 27-ft. Kuresoo bog, the tallest in Europe, suspension bridges, pools and a viewing tower that provides peaceful views of the bogs and Toonoja forest. soomaa.com

Latvia is currently bursting its way into the travel consciousness of those in search of affordable destinations that offer unique experiences. The country, approximately the size of West Virginia, is bordered by the Baltic Sea, Belarus, Estonia, Lithuania, and Russia. It is comprised of 47 percent woodlands, farmlands, four national parks, more than 20 castles, 321-miles of beaches and the largest city in the Baltics. Four tribes dominated the region from the 700s to the 12th-century and the country took its name from the Latgalians who were among them.

Essentially, Latvia’s history mirrors that of Estonia because of its location at the heart of the Baltic trade routes. Germans, Poles, Russians and Swedes constantly invaded until it was made part of the Russian Empire in 1721. In 1918, Latvia declared their independence from Russia. Soviets invaded in 1940 and it became part of the USSR until the Germans invaded in July of 1941. In 1945 at Yalta Roosevelt and Stalin signed an agreement that placed the Baltic States under Soviet rule. The success of a nationalist movement resulted in Latvian independence on August 21, 1991.

Gauja National Park was established in 1973 to preserve and protect the Gauja Valley and it has more than 500 sites and attractions. Ligatne, located within the valley, is 47-miles from Riga and is home to one of Latvia’s biggest attractions, the Secret Soviet Bunker. The need for a bunker to protect 250 of the Soviet elite for up to three-months during a nuclear or chemical attack was first recognized in 1968 and four-years later it opened as a bunker and a command center for the country’s communist leadership.

The bunker was built 30-ft. beneath the Ligatne Rehabilitation Center using 16-ft. of steel and concrete. On the exterior there are three helicopter landing sites camouflaged as swimming pools and a basketball court. Tours of the interior begin with an overview and proceed down flights of stairs into the bunker.

There are 96 rooms and the tour takes you to the most significant ones. Many of the rooms retain their original furnishings and antiques. You will notice the lack of sleeping quarters because after your shift you simply slept on the floor of your workplace. Highlights of the tour are the computer room, communications room and three rooms used by the KGB to receive special orders from Moscow. A favored location for photographs is the Map Room with its huge map of the USSR and bust of Lenin. Visitors can extend their tour by pre-arranging a Soviet themed meal in the cafeteria.

Cesis has been described as a time capsule of Latvian history because it has dwellings that date from the Stone and Bronze Ages and the Cesis Castle Complex is a wonderful place to begin. The site began more than 1,000-years ago with a wooden Iron Age hillfort built by the Wends, an early tribe. A castle was built in 1209 by the crusading Order of the Sword Brothers who set out to Christianize the region on the hillfort site and in 1214 they constructed a stone castle nearby. Twenty-three years later Teutonic Knights gained control and it eventually functioned as their administrative headquarters. Ivan the Terrible attacked the castle in 1577 and the hundreds of people inside, realizing it was hopeless, committed suicide in the main castle hall. Cesis Castle was abandoned in the 1700s and it fell into ruin. Currently it is rated the best-preserved castle ruins in the country and it is 95 percent original.

Tours on the castle grounds include the Medieval Activity Center. You can climb up the Western Tower for a great view or into the Southern Tower to see the dungeon. The Latgalian Treasures, ancient original jewelry and museum quality replicas, are on view in the blacksmith shop on-site. The regional designs are from the 8th-13th centuries and visitors can try them on and purchase items in the shop.

Sigulda, the Switzerland of Latvia, is located 33-miles from Riga and it is home to Tarzan’s Adventure Park, the largest outdoor park with the longest toboggan track in the Baltics. A ropes course has more than 80 obstacles throughout the trees and a chairlift offers visitors a great view of the surrounding area. tarzans.lv

The only cable car in the Baltics is found in Sigulda and it provides riders with a stunning view of the entire valley, Gauja River and Turaida Castle. It is possible to bungee jump from the cable car by prearrangement and there is naked bungee jumping on June 4th annually. bungee.lv

Catherine the Great, not to be outdone by other Russian rulers, ordered Mežotne Palace to be built and gifted it to her children’s governess Charlotte van Lieven In 1795.  Construction was completed in 1802 and Charlotte spent exactly one day and one night in the palace. Designed by Giaccomo Quarenghi, the building is one of the finest examples of classicism in the Baltics. During WWII it was partially destroyed but was restored in the 1990s. Twenty rooms are on the tour of the interior and an exterior tour weaves through an English park with three distinct areas, a summer park, a winter park and a parade ground. The third floor of the palace is now a 4-star hotel.

During the Bronze Age a fortified settlement was established at the juncture of the Musa and Memele Rivers. Records of the colony show that it thrived in 1443. By 1451, the rectangular Old Bauska Castle was completed with five cannon towers, walls up to 12-ft. thick, a dry moat and a palisade. This was one of the final castles built for protection by the Livonian Order. Of particular note is the wooden wall battle passage.

The 1562 New Castle is the reconstructed Renaissance castle of the Duke of Courland. The tour takes you through the simple row of rooms adorned with 14 fireplaces, 17 glazed stoves and ornate ceramic tiles on the first floor. In the southeastern tower there is an excellent exhibition, “Clothing and ornaments in the Duchy of Courland from the Third Quarter of the 16th Century to the Second Quarter of the 17th Century.” Bauskaspils.lv

By now you know why the Baltic region is an emerging tourist destination and we have not yet reached Riga. More information on Latvia is available online. www.latvia.travel

The University City District will present a free movie at 45th & Woodland in Clark Park every Friday from August 21st – September 18th. Movies will be shown at dusk and are weather dependent. Additional information is available at www. universitycity.org