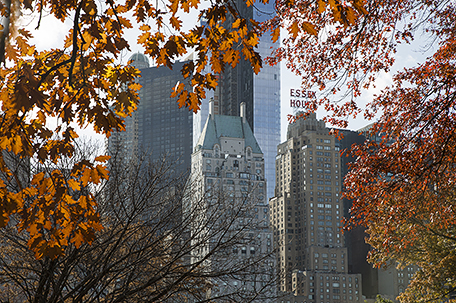 Last year New York City had more than 54-million visitors from around the globe, breaking the 2012 record of 52 million. Many of those people were, like me, repeat visitors and one of my favorite New York pastimes is to watch first time tourists stand in awe in the middle of Times Square. What makes people of all ages, nationalities, professions and income levels gravitate toward Manhattan?

I believe it is because New York City reinvents itself on a daily basis. There is always something exciting, new and cutting edge to be experienced. Seasonal happenings, annual escapades and iconic adventures are offered the length and breadth of the island. With all that in mind autumn in New York promises to be full of excitement.

Inside the 2.4-million-sq.-ft. museum is an unparalleled permanent collection representing more than 5,000-years of international art as well as special exhibitions. On exhibition from September 30, 2014–April 19, 2015, in the American Wing, “Thomas Hart Benton’s America Today Mural Rediscovered” will be on exhibit. Benton’s 10-paneled mural was painted in 1930-31 for the boardroom of NY’s New School for Social Research. The mural, Benton’s first large mural assignment, was designed to depict urban life, working class and modern industrialization in the 1920s prior to the depression.

The exhibit is separated into three sections with sections one and three featuring mural studies by Benton in section one and photographs and paintings by other artists that are related to the mural or Benton in the final area. The second section is a replicated 30 by 22-ft. boardroom showcasing the 10-panel mural. The exhibition gives viewers an opportunity to study an artwork holistically and gain a 360-degree understanding. The mural was donated to the Met in 2012. www.metmuseum.org

Turner Classic Movies (TCM) and On Location Tours have partnered to craft the perfect NYC movie experience. The TCM Classic Film Tour is not just for cinema buffs but will delight anyone who has ever seen a film set in the city. The three hour guided bus tour includes more than 60 film locations, insider’s information on the movies, film clips and stops at the most iconic sites including Marilyn Monroe’s subway grate, Holly Golightly’s brownstone and the Dakota, home of “Rosemary’s Baby.” Tours are scheduled for Tuesdays, Thursdays and Saturdays, at 11:30 a.m.  www.onlocationtours.com/tour/tcm-classic-film

The 9/11 Memorial Museum opened in May of this year with a stated mission of preserving the history, documenting the impact and studying and monitoring the ongoing consequences of the events of 9/11. The 110,000-sq.-ft. museum is located on the site of the World Trade Center. Admission is free on Tuesdays from 5-8 p.m. www.911memorial.org/museum

The very under rated, Museum of Mathematics opened in 2012 to focus on how math influences our lives. Interactive exhibits provide opportunities to understand how mathematics is interwoven into everything we do. Special activities are designed for grades 4- 8. www.momath.org

Discovery Times Square (TSX) is located in an 80,000-ft. area of the former New York Times Building. TSX’s unique rotating exhibits are fully immersive experiences that allow visitors to closely examine displays and in many cases interact with them. Currently, there are three world-class exhibitions on display.

“The Art of the Brick” has been designated by CNN as one of the Top 10 ‘Must-See Global Exhibitions.’ Lawyer turned artist Nathan Sawaya crafts large-scale artworks made exclusively of LEGO® bricks. This is the largest collection of Lego art to have ever been displayed. Galleries contain more than 100 artworks including 50 replicas of renowned paintings such as the Mona Lisa. This display has drawn record-breaking crowds and you should be among them. Tickets are available online. www.showclix.com/event/TheArtoftheBrick

Gunther von Hagens’ “Body Worlds: Pulse” is a science exhibition that features more than 200 human bodies that have undergone the process of plastination. The bodies on display come from a body donation program that requires donor consent. Bodies are treated and then placed in lifelike poses to allow viewers to see how the body moves and functions.

Under Your Skin, developed by Sandbox Digital Playground, is a free downloadable app available at the Apple iTunes Store. It allows you to take a photo on your telephone and manipulate it so that you can see what lies beneath your skin. Put a Halloween scare into your friends. www.discoverytsx.com/exhibitions/bodyworlds

Marvel’s Avengers S.T.A.T.I.O.N. and the agents of S.H.I.E.L.D. have relocated to Times’ Squares’ Discovery Theater and they are offering limited access to civilians. This is a world premier exhibit that is the result of a collaboration of groups including NASA and Marvel Entertainment with an endorsement from Stan Lee himself. The 10,000-sq.-ft. exhibit showcases 140 video screens, large touch interfaces, robotics, and objects that belong to individual Avengers.

The tour is set up so that it appears the Avengers have just left the facility on an urgent mission. Visitors make a computerized entry badge, are scanned for weapons and are given their orders by a recruitment officer before they are admitted into the station. Highlights of the galleries include outfits worn by Nick Fury, Thor, Captain America and Iron Man. Loki’s helmet, Captain America’s shield and the Hulk’s serum are also displayed. I don’t want to spoil it for you but when you go into the Hulk’s lab something exciting occurs. You definitely need to purchase tickets in advance. www.discoverytsx.com/exhibitions/avengers

AnthonyKen LLC and Sheryl Lee Ralph/ The Diva Foundation are presenting “Mighty Real: A Fabulous Sylvester Musical” off-Broadway until October 5th. Sylvester James, Jr., an American Disco Queen, began by singing gospel in the Pentecostal church and pursued his dream to fruition as a solo artist ultimately recording 12 albums and induction in 2005 into the Dance Music Hall of Fame.

Sylvester left not only a musical legacy but became a pioneering inspiration for not only the diverse LGBT community, but for all individuals who seek to live authentic lives that reflect who they are. Sylvester became a diva cloaked in “fabulosity” on his own terms. “Mighty Real” immerses the audience in Sylvester’s world from childhood until his death in 1988.

The musical is sheer perfection and literally a dream come true. Anthony Wayne and Kendrell Bowman created AnthonyKen, LLC Production Company and produced this theatrical event through personal fundraising, their individual skills and sheer force of will and the community is better for it. Their goal is to raise the level of social consciousness on issues of diversity and promote understanding of differences using the arts as a vehicle.

Kendrell Brown “is” Sylvester. He manages to deftly capture the excitement of his live performances down to the patter with his backup singers. His voice is phenomenal as are the voices of the singers who variously portray his idols, Tina, Patti, Aretha and the Weather Girls. There are more than 14 songs, all backed up by incredible musicians, during the 90-minute production and in this case there really is a message in the music. Tickets are available online as well as a short video performance. www.FabulousSylvester.com

Sheryl Lee Ralph’s D.I.V.A. Foundation is the co-producer. The organization was established by Ms. Ralph to raise awareness of all aspects of AIDS and eradicate its stigmatization. She is credited with creating “Divas Simply Singing!,” the longest consecutively performed musical AIDS benefit in the nation.

Some of the thrill of a vacation in NYC is finding accommodations that become part of the adventure and are located near the sites and attractions you plan to visit. Two adjacent sister hotels, The Tuscany – A St Giles Luxury Boutique Hotel and The Court, in the Murray Hill District, are perfect for this awesome and unique trip.

The Tuscany Hotel’s 123 guestrooms underwent a renovation last year. The accommodations are spacious and fully outfitted with luxury linens and amenities and rainforest showerheads. The hotel has an aura of elegance and the staff is welcoming and extremely professional. Once in your guestroom I guarantee you will be awed by the close-up views of NYC’s signature Chrysler and Empire State buildings. The Tuscany is located close to the UN and is often the choice of businessmen and delegates. The hotel provides free WIFI and pet amenities upon request. www.stgiles.com/new-york-hotels/the-tuscany-hotel

The Court’s 199 guestrooms are also very spacious and feature Philosophy bath amenities. This is the hotel of choice for many MTV personalities and rock stars. The atmosphere here is no less luxurious than its sister but it exudes trendiness in color and design that is less traditional.

Beer & Buns, B&B, was opened in the Court six months ago to immediate acclaim. Chef Nok has crafted gourmet burgers deftly blending Asian and American flavors. The featured, and famous, menu selection is the B&B Indulgence Burger. The Kobe beef burger is served with sautéed foie gras, white truffles and beluga caviar on a homemade artisanal bun. The Indulgence Burger may be priceless but you can order it for $250.00. It must be noted that for each purchase of an Indulgence Burger a donation is made to NYC’s City Harvest, to help eliminate hunger. The burger has been featured on CNN and Good Morning America. www.beerandbuns.com

If there is one place in the world you can feel “mighty real” it is New York City. It is less than two hours away and offers something for everyone. Make plans to visit today. www.nycgo.com

From September 12, 2014 until January 4, 2015 the African-American Museum in Philadelphia (AAMP) will showcase “Cash Crop”, a groundbreaking exhibition by Stephen Hayes. The exhibit is designed to allow viewers to draw parallels between the transatlantic slave trade and modern sweatshops and to start a dialog on how the experience of African American slavery resonates in modern culture. It is presented in three galleries with Haynes’ sculptural artwork as the focal point. Two adjacent galleries feature historical slavery documents regarding Philadelphia’s legal system and artifacts on loan from the Lest We Forget Museum. www.lwfsm.com

Cash Crop consists of fifteen life-sized figures of Africans chained to wooden representations of slave ships. Each of the figures, men, women and children, represent 1-million of the estimated 15-million enslaved Africans who was a victim of the trade. On the back of each sculpture there is a diagram of the slave ship Brookes. This diagram illustrates the ships decks and its use of “tight packing.”  After 1788 the Brookes was allowed to carry no more than 454 of the captured Africans, prior to that it carried as many as 740. This image of the Brookes was used effectively as propaganda by England’s abolitionists. This exhibition is a unique learning experience. Details can be found online. www.aampmuseum.org

This year, Hennessy Cognac, the world’s top-selling cognac brand, selected American artist, Shepard Fairey to create a signature bottle design for the latest contribution to the artistic series of Hennessy V.S. Limited Edition bottles. Fairey, a contemporary street artist, graphic designer activist and illustrator who emerged from the skateboarding scene, is most famous for his 2008 U.S. presidential election for his mixed-media “Hope” poster depicting Barack Obama.

Fairey, after visiting the company’s Cognac, France facility, was impressed with Hennessey’s commitment to its employees, their support of his activism and their willingness to fund a full scholarship for a student to attend his alma mater, Rhode Island School of Design. A collector’s item, 750ml bottle of Hennessy V.S Limited Edition is available. Each of the 300,000 bottles is individually numbered. The new label was launched in Philadelphia and makes a truly unique gift. www.HennessyUS.com