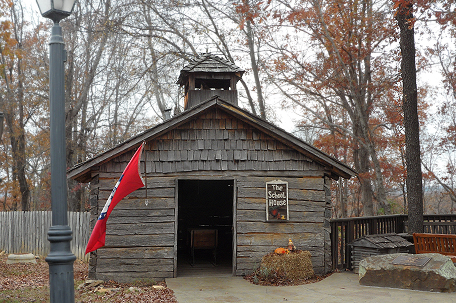 “On a lonely road quite long ago, A trav’ler trod with fiddle and a bow;
While rambling thru the country rich and grand,
He quickly sensed the magic and the beauty of the land.” –Arkansas State Song

The Ozarks is both a physical and cultural land mass located in the central region of the United States with the generally accepted area extending into portions of Kansas, Missouri, Oklahoma and Arkansas. The French were the earliest explorers and cartographers of the region and upon reaching the northernmost bend in the Arkansas River they called it “aux arcs,” the “top of the arch”. Settlers and explorers who followed pronounced this toponym, place name, as Ozark. They used this as a point from which to travel into the mountainous area north of the river and the entire region became identified as “The Ozarks”. This is the largest mountainous territory between the Appalachians and the Rockies, covering more than 40,000-sq. miles. The area is a distinct cultural region and, because of its mountainous isolation has managed to maintain its uniqueness.

Nomadic American Indians were the first to enter the Ozarks region. Immediately after the Louisiana Purchase settlers, mainly of Scots-Irish descent, migrated into the area from Kentucky and Tennessee. They lived much like the natives who preceded them, hunting, farming and fishing to obtain enough food to live at a subsistence level. Stories were passed down orally and the folk arts, woodcarving, weaving, leather craft, fabric, basket and broom making, were learned through practice and participation. Traditional music permeated the culture, including both family and community gatherings, and the Arkansas Ozarks today represent “the Folk Music Capital of the World”. For the past 13 years the Arkansas Arts Council has annually honored a master craftsman by designating him or her as a State Living Treasure. www.arkansasarts.org

Mountain View is the seat of Stone County. The town, established in 1873, is near the former site of the town of Riggsville and is so named because of the stunning view of the Ozark Mountains. Mountain View has been named one of Men’s Journal’s “Best 52 Weekends in the United States”. It is located in the heart of the mountains and offers easy access to a broad range of outdoor activities including the Syllamo Mountain Bike Trail. The International Mountain Biking Association has deemed the 50-mile trail one of only 37 designated “Epic Rides”. The trail, named after an early settler, is a series of 4 interconnected loops. An annual race, Syllamo’s Revenge Mountain Bike Challenge, has a course record time of 4:18:36. www.stonecountytouristguide.com

The shifting of an inland sea and erosion by a natural spring formed the fossilized limestone Blanchard Springs Caverns millions of years ago. The earliest evidence of human habitation is the skull of a prehistoric Indian, dating from around 893 AD, discovered in 1955. No clues remain as to why he was there. John H. Blanchard, after whom the cave is named, was from Kentucky. He enlisted in the southern army in 1861, was wounded, captured and place in a Union POW camp. After the war he sought solace and came to the Ozarks where he homesteaded 160-acres and constructed a gristmill powered by water from the spring on his land.

Blanchard Springs Caverns Recreation Complex consists of Blanchard Springs, Mirror Lake, campgrounds, a hiking trail and the caverns. Three cave tours are offered, the Dripstone Trail, the Discovery Trail and the Wild Cave Tour. The Discovery trail is 1.2-miles and has approximately 700 steps. The Wild Cave Tour requires sturdy boots. Hard hats, gloves, lights and kneepads are issued at the site. It is necessary to crawl through tight passages and participants must be at least ten years old. The Dripstone Trail is 7/10-mile, has a maximum of 50 steps and is on a wide concrete walkway that is handicapped accessible. There are two seating areas.

An elevator takes you 200-feet to the cave floor where the tour begins. The descent takes you 21.5-floors, 216-feet, in 45-seconds. Participants should be prepared for the 58-degree temperature. All tours are guided. This is the nation’s only cave managed by US Forest Rangers. www.blanchardsprings.org

Historic Courthouse Square is the nerve center of Mountain View and at its heart is the 1922 courthouse designed by Clyde A. Ferrell. Each evening, April to mid-November, an informal jam session is held in front. This is folk music at its best in a traditional community setting.

The Arkansas Folk Festival is held annually in downtown Mountain View. The festival is an outgrowth of the Stone County Folkways Festival held in 1941 in Blanchard Springs. World events intervened and the next festival was not held until 1963. The event draws visitors from around the globe. The Artisans Market on the Square is a featured venue at the festival. This juried arts and crafts exhibition and sale was introduced in 2008.

Once the Arkansas Folk Festival was reinstated it became such a huge success that it became obvious that the small town of Mountain View could not support the crowds and both a permanent venue and adequate facilities were needed. Other issues emerged, after residents left the region to serve in World War II they were introduced to forms of music other than the folk music they had always played, some of the traditional arts were being lost, and the town had few roads and no water or electrical systems because of its isolation.

During that time, federal grants were available for communities who submitted proposals for viable projects. These grants were designed to include funding for a subsidiary project such as bringing water lines into the area. The Ozark Folk Center opened in May of 1973 to perpetuate the mountain culture by preserving, protecting and teaching the “cabin crafts” unique to the area from 1820-1920.

The $3.4-million Ozark Folk Center State Park is a total of 640-acres, 88 of which are used with the remainder maintained as wilderness. The center is the largest complex in the country to focus on the traditions and heritage of a single region and is a living history interpretive center that allows visitors to immerse themselves in the culture. Classes and performances are offered and conference facilities, accommodations and dining are available on-site.

OFC’s Crafts Village features 24 buildings along a winding trail. Each house is a studio where an artisan works at their craft using native materials and traditional methods and tools. Many of the craftspeople have won awards for the quality and creativity they employ in elevating these items, designed for daily use, into superb works of art. The artists invite you to watch, in some cases participate, as they give detailed explanations of the history of the craft as well as the skill involved. The crafts include but are not limited to photography, weaving, cooperage, quilting, flame painted copper and broom, knife and printmaking. Every art demonstrated is also taught here. Items crafted in the village are sold by the individuals and in the Homespun Gift Shop.

Music rules here and there are performances throughout the day on the village grounds. Celebrity performances are presented in a 1,000-seat auditorium. The music is pre-1941 and highlights the mandolin, autoharp, dulcimer and fiddle. The music is sometimes accompanied by jig dancing, square dancing or clogging. Songs were historically passed down orally and watching and participation was how one learned to play an instrument. More than 125 musicians perform here annually. www.ozarkfolkcenter.com

The center’s Cabins at Dry Creek are octagonal with huge floor to ceiling windows and a patio. The rooms have all the standard amenities and a mini-refrigerator flat screen television and Wi-Fi. The cabins are large but cozy, the view of the surrounding woods is fantastic and the cost is affordable.

The Skillet Restaurant is the center’s main dining room. It serves southern food made from only the freshest ingredients.

Award-winning JoJo’s Catfish Wharf Restaurant is a must while in the area. The restaurant, renowned for its seafood, overlooks the White River. Be prepared to wait. There is usually a line.

Become an Arkansas Traveler. Step back into the history and heritage of a unique slice of Americana. www.arkansas.com

*Dates, names and numbers vary greatly and I have attempted to include information from legitimate scholars.

The Soul of Arkansas (part two)

Little Rock, the Heart of Arkansas