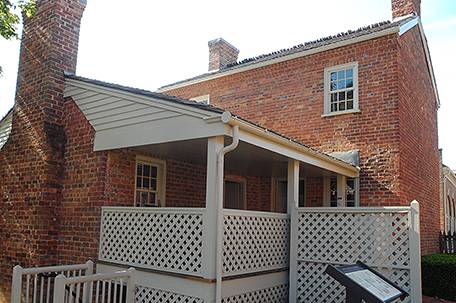 None of the sons of Tennessee had a greater impact on American history than Andrew Johnson. Although Johnson was born in a log cabin in Raleigh, North Carolina on December 29, 1808 he spent the better part of his life and political career in Tennessee. What is believed to be his birth home is on display in Raleigh in Mordecai Historic Park.

The undated wooden structure has one floor and a loft and has been moved three times. Records indicate that a black family occupied the home in the 1880s just prior to it being identified as the birthplace. Legend has it that the cabin is haunted. It has been reported that a candle has been seen burning inside.

Andrew’s father Jacob drowned in 1812 and his mother, Mary, was left to care for the poverty stricken family. She was a seamstress and when she remarried she and her husband apprenticed her sons, Andrew and William, to an area tailor named James Selby in 1818. He abandoned his apprenticeship contract in 1824 and successfully evaded being caught for the $10 reward while working as an itinerate tailor. In 1826, Andrew and his family moved to Greeneville, where he established a tailoring business.

Eliza McCardle met Johnson as he arrived in Greeneville searching for work. They wed on May 27, 1827. Eliza would become the first First Lady born poor and the one who married at the youngest age. Mordecai Lincoln, Abraham Lincoln’s second cousin, performed the wedding. Though poor, Eliza had attended the Rhea Academy and it was she who taught the barely literate Johnson reading, writing and arithmetic.

The newlyweds moved into Andrew’s two room tailor shop. One room functioned as their home while they lived in the second. The shop quickly became a place for working men to gather and discuss politics and Johnson became an advocate for the common man.

In 1829, he was elected alderman and during this period he traveled the state in support of a provision to disenfranchise freedmen in Tennessee’s new constitution. The tour gave Johnson political exposure and in 1834 he was elected Greeneville’s mayor. One year later he became a state representative on a platform of anti-abolitionism, states’ rights and advocacy for the poor. Two years later he lost his seat.

The year 1843 found him elected to the U.S. Congress. He continued to state that slavery was essential and that the Union must be preserved. He served five terms as State Representative. In 1857 he was elected to the U.S. Senate, a position he held, and retained, at the start of the Civil War because he was the sole Southerner in the Senate to remain loyal to the Union. He still maintained his proslavery and states’ rights stance. After secession his property was confiscated, his family moved to Nashville and he was widely regarded as a traitor. In 1862 Lincoln appointed him military governor of Tennessee and as such managed to get the state an exemption from the Emancipation Proclamation in 1863.

Emancipation Day is celebrated in Tennessee on August 8, 1863. On this date Eliza called their personal slaves together, freed them, and gave them the option to leave or remain. They stayed. Johnson owned eight slaves over his lifetime, the first being Dolly who requested that he purchase her and her brother Sam. All of the slaves in the state were freed on October 24, 1864.

On June 7, 1864, the National Union Convention met to nominate a Vice President. Andrew Johnson was named to the ticket and on March 4, 1865 he became Vice President of the United States. When President Lincoln was assassinated six weeks later he would become President. William Johnson, his former slave, was with him in the White House for his entire tenure, even sleeping in the same room.

The Andrew Johnson National Monument was established in Greeneville by Franklin Roosevelt in 1942 and became the Andrew Johnson National Historic Site in 1963. It preserves the legacy of the 17th President through three sites connected with his life. Tours begin in the Visitor Center with a 13.5-minute orientation film, “Defender of the Constitution,” narrated by Fred Thompson. The center also features informational exhibits culled from the park’s more than 70,000 object collection. www.nps.gov/anjo

The most important exhibit in the Visitors Center complex is Johnson’s 1831-43, one room, tailor shop. It is housed inside a Memorial Building adjacent to the center and is viewed from the exterior only. It is outfitted as it would have been when Johnson owned it. Information panels around the shop interpret that period of his life.

Directly across the street stands the brick Andrew Johnson Home. He and his family lived here from 1831-51 and it is filled with portraits and information on his family life and political career pre-presidency.

A short walk away is the Andrew Johnson Homestead. This two story unassuming brick house has 10 rooms open to the public and was built with elements of both Federal and Greek revival architecture. Many of the furnishings belonged to Johnson or the family. Highlights of a Homestead tour include a Samuel Shaver portrait of Andrew Johnson and a table from Ireland. In 1862, the family was forced to vacate the house. It became a Confederate hospital and visitors can see some of the scathing graffiti the soldiers left for Johnson to read when he returned. The homestead also served as Union headquarters with US Colored Troops billeted in the area. Johnson purchased the home and 1/2-acre of land in 1851. He and Eliza lived there together from 1869-1875.

Congress was in recess until December of 1865, Andrew Johnson had eight months of autonomous rule and during that period he began reconstructing the southern states. In May 1865, he granted amnesty and pardons to former Confederates willing to swear allegiance to the U.S. The only exceptions were high-ranking Confederate officials and those with $20,000 or more in property. By 1866, he had pardoned 7,000 Confederates and revoked Sherman’s Special Field Order #15, requiring that all land given to freedman be returned to former owners. Southern states rushed to establish new constitutions that included Black Codes, in many ways maintaining slavery.

When Congress reconvened they attempted to halt Johnson’s policies. They passed the Freedman’s Bureau Act, funding the bureau, and the Civil Rights Act, making freedmen citizens, and the 14th Amendment, giving federal, legal, protection to all citizens. Johnson attempted to stop the passage of the acts by veto, but he was not successful. In 1867 he actively campaigned against passage of the 14th Amendment.

In 1867, the Tenure of Office Act was passed to prevent the President from removing from office those officials who had been appointed after approval by the Senate. Johnson was impeached over the issue of replacing Secretary of War Edward Stanton with Major General Lorenzo Thomas. He came within one vote in 1868 of being convicted. He served only a single term.

Tusculum College is the oldest college in the state. It was founded in 1794 and named in honor of a site in Rome. Ten buildings on the campus are listed on the NRHP. www.tusculum.edu

Old College was erected in 1841 and is the second oldest building on campus. Andrew Johnson donated $20.00 towards its construction and was on the Board of Trustees from 184-75. In 1861 when Johnson publicly spoke against secession the students burned him in effigy and hoisted a Confederate flag atop Old College. Soldiers were housed on the campus during the Civil War.

The President Andrew Johnson Museum & Library is currently housed in Old College and contains more than 1300 artifacts and five linear feet of paper items. Featured items in the museum include a bust of the Vice President, a copy of Lincoln’s life-mask and Eliza Johnson’s chair. Eliza, a semi-invalid, suffered from tuberculosis and during his term she appeared in public only twice. www.ajmuseum.tusculum.edu

Doak House Museum was the former residence of Tusculum’s founder, the Rev. Samuel Doak and his son and  co-founder, Samuel W. Doak. He raised 13 children in the house. The modified two story Georgian House has a central hall and was constructed around 1830 with an ell was added three years later. Among the interesting architectural elements is a glass-encased panel in the kitchen that allows visitors to view wishbones that were placed in the walls of the house between the bricks during construction, possibly by enslaved workers. There are three original pieces of furniture on display. The home can only be visited on a guided tour.

On July 27, 1875, former President Johnson set out to visit his daughter near Elizabethtown. On July 28th he suffered a stroke and died on the 31st. His wish, “When I die, I desire no better winding sheet than the Stars and Stripes, and no softer pillow than the Constitution,” was carried out.

Johnson was buried on Signal Hill on property he owned. He requested the site because of the view of the mountains. Four years after his death Greeneville placed a 27-ft. marble column atop the site and renamed it Monument Hill. The land became a National Cemetery in 1906.

In 1956, Kenneth Stampp published “The Peculiar Institution” in which he discussed the issues of morality, resistance and the realities of enslavement. Andrew Johnson’s life, both personal and political typifies the “peculiarity” of the institution and the era and is best exemplified by his interaction with his personal slaves.

Samuel Johnson, one of Andrew’s former slaves, was appointed a Commissioner of the Freedmans Bureau in Greeneville. In March 1867, he wrote to President Johnson explaining that he had been charged to generate funds for land for a colored school and he requested that Johnson sell him a plot of land for that purpose. Johnson’s response was to have an assistant survey and draw up a deed for the land and gift the property to Samuel.

Journalist Ernie Pyle interviewed Johnson’s ex-slave William on whether or not he fared better owned by Johnson or as a freedman. He responded, ”Yes, we were mighty well off then. But any man would rather be free than be a slave.”

One way to better understand an individual is to inhabit their space, follow their paths and see how and where they lived. Andrew Johnson was a man of his times, and more. Plan a visit to Tennessee. www.tntrailsandbyways.com

I wish you smooth travels and Happy Holidays!

Lee County & Visitors Bureau has created an immersive 5-minute film, “Awaken,” designed to introduce viewers to the ecological diversity and stunning vistas of the Beaches of Fort Myers & Sanibel, Florida. This unique free film can be viewed on PCs and smartphones. www.fortmyers-sanibel.com/awaken.

One of the wonderful things about Philadelphia is the fact that we are within a day’s drive of so many attractions. One of the most outstanding, Lehigh Valley, PA, has been named the state’s top ski and winter sports destination. Eleven area hotels are currently offering Stay & Ski packages, including vouchers for additional activities and accommodations. Specials are valid until March 2014. www.LehighValleySki.com and www.DiscoverLehighValley.com.

Whenever I travel people question me about the iconic “Philly Cheesesteak”. As the year comes to a close I thought it might be nice to remind you that we have access to a food that brings people from across the planet. This delicious sandwich began in Philadelphia in 1930 when Pat Olivieri, a hot dog vendor, put some beef on the grill and a legend was born.

This is definitely the season to stop at Geno’s Steak’s on 9th Street and eat as so many of the rich and famous have before you. You’ll quickly learn you can believe the hype. www.genosteaks.com

Joe’s Steaks + Soda Shop has the distinction of being the sole steak shop cited in Anthony Bourdain’s “The Layover”. All of their rib-eye is hand sliced and sandwiches are made to order. www.joessteaks.com