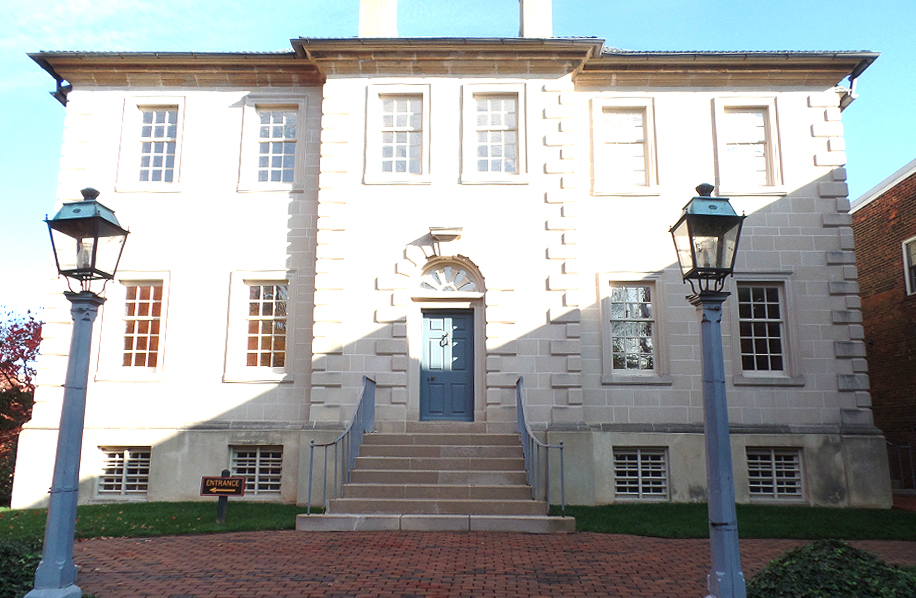 ABOVE PHOTO:  Carlyle Mansion (All photos by Renée S. Gordon)

There are cities older than Alexandria, Virginia and cities that have witnessed as many of America’s major historical events but there are no other colonial cities that experienced history in such a personal way and none that can as readily evoke the sense of historical immediacy.

John Alexander purchased the property on which Alexandria, Virginia sits today in 1669 for 6,000-lbs. of tobacco and In 1748 three Scotsmen, John Carlyle, John Pagan and William Ramsey selected land to establish a trading and shipping port. visitalexandriava.com

The 60-acre historic district began with Market Square surrounded by 84 lots on ten streets that serve as a reminder that at the time of the city’s founding it was strongly English. The main streets are Fairfax and Cameron with Duke, Prince, King, Queen, and Princess. Thirteen-years after the founding the total population was 1,214 with 264 being slaves. Records indicate that ships docked in Alexandria with cargoes of slaves. facebook.com/VisitAlexandriaVA 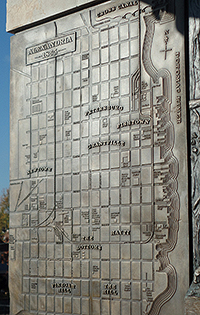 Market Square began life in 1753 as an open field used by locals, including Washington, to sell produce, animals, crafts and African slaves and was once the site of the colony’s second largest slave market. The square still hosts on Saturdays the longest continually operated market in the country.

Tours of Alexandria should begin in the Ramsay House, the oldest house in the city and now a tourist bureau offering complete destination information, reservations, tours and an orientation film.

The house predates the city and was probably built circa 1724. Ramsay had the house floated up the Potomac, placed there.

The 1753 Georgian Palladian style Carlyle House was the most stunning house of the era. Major General Edward Braddock chose the mansion as his headquarters when he arrived on February 1755 in the colonies as the Commander-in-Chief of His Majesty’s Forces in North America to fight the French and Indian War. Six months later Braddock held a Council of Governors requesting funds for the war. The symmetrical 2-story house with two rooms on each side of a center hall was built of local sandstone with a Georgian-hipped roof and projecting central pavilion. His workers, both enslaved and indentured, carried on construction. He was one of the largest slaveowners in colonial Virginia. Up to 25 slaves labored at the Carlyle House property with others working on his 3 plantations. It was listed on the National Register of Historic Places in 1969 and underwent restoration in 1976. The mansion is furnished based on an inventory.  Tours are regularly scheduled and include a 15-minute orientation film.

In 1963 Gadsby’s Tavern was designated a National Historic Landmark. John Wise erected a small tavern in 1785 and the larger City Tavern, later the 3-story City Hotel, in 1792 on the site of a 1743 tavern. Under the management of John Gadsby from 1796-1808 the hotel and tavern flourished and became an important public space for the town and hosted the founding fathers. The 1793 Georgian ballroom, the most beautiful and famous room in the hotel, was dismantled and is now displayed in the American Wing of the Metropolitan Museum of Art. On the exterior a 1793 ice well is an example of one of the sole remaining urban ice wells in the country. The two buildings are restored to their colonial appearance and are now greeting visitors as Gadsby’s Tavern Museum. gadsbystavern.org

More African Americans, enslaved and free, labored in taverns than in any other non-plantation industry but few were owners. One of the rare exceptions was Dominick Barecroft who purchased his freedom, opened a public house and resided at 315 Cameron Street. His establishment became famous for his crab dishes and paid for his emancipation in 1800. He earned enough to purchase his wife and emancipate her in 1804.

The Stabler-Leadbeater Apothecary Shop, Stabler’s second, opened in 1796 and remained in operation for 141-years. The shop maintains its 19th-century appearance and features the largest collection of medicinal glass in its original setting in the nation. Additional highlights include prescriptions, scales, utensils and patent medicines. Edward Stabler, a trained pharmacist and Quaker minister, established the business. In 1852 John Ledbetter purchased the business and in 1933 the family shuttered the doors leaving the contents intact. Stabler founded an abolitionist society and was known to purchase slaves and free them. Tours include the first floor shop and the pharmacist’s workroom in the second level. In 1982 the structure was listed as a National Historic Landmark. apothecarymuseum.org

In 1789 Virginia ceded Alexandria to the federal government and it became part of the District of Columbia in 1801. The slave trade became a major industry in the 1820s. So lucrative was the trade that on July 9, 1846 Alexandria’s citizens demanded that the town be retroceded to Virginia. Some scholars believe that the reason for their referendum was their belief that slavery was about to be declared illegal in DC.

Alexandria is an incredibly accessible city and that ability to “travel smoothly” while there extends to the fantastic number of tours, informational plaques and thematic trails available to visitors. All the trails intertwine at some points but you can concentrate on the 1.33-mile Hayti Trail to ensure that you visit the most important African American locations. The trail is named in honor of an 1810 free black neighborhood, an expansion of the 1798 African American “Bottoms”, named after the island of Haiti.

Freedom House is one of the most significant black heritage sites in the US. The 3-story, L-shaped Adamesque building, was the office of Franklin and Armfield from 1828-38 and was the largest slave-trading firm of the era. In those years they shipped more than 1,000 slaves to New Orleans annually with company owned ships, Tribune and Uncas, sailing once each month. Robert Young built the house in 1812 and F & A added slave pens, holding areas, along the street. nvul.org/#!freedom-house-museum/c79w

Joseph Bruin purchased a Federal-style house and 2-acres of land on Duke St. in 1844. Records indicate that he and his partner were buying and selling slaves by 1845 with as many as 50 held in the barracks at a time. Bruin & Hill became the largest and most infamous slavetrading firm in the region. Harriet Beecher Stowe cites details of Bruin’s slave jail in Uncle Tom’s Cabin. Bruin fled when Alexandria was occupied but was later imprisoned in DC.

Once enslaved people became aware that Alexandria was held by the Union they came to Alexandria in droves and from 1864-69 the Contrabands and Freedmen’s Cemetery became the site of their final resting place. In 2014 it became a memorial dedicated to the nearly 2,000 people buried there. The 9-acre Alexandria African American Heritage Park encompasses a 1-acre Baptist cemetery with 21 identified burials, six of which have headstones and remain in their original location. Mario Chiodo’s sculpture “The Path of Thorns and Roses,” is a focal point of the memorial as are bas-reliefs by Joanna Blake and sculptures by Jerome Meadows.

On May 23, 1861 Virginia voted to secede from the Union and on May 24th federal troops marched into Alexandria making Alexandria the city that was occupied the longest during the Civil War. Because of its location, 6-miles from DC, Alexandria became important for spies, slaves and the sick and wounded. PBS, recognizing this unique history of Alexandria, will premiere a new series, “Mercy Street”, in 2017. In part two we will explore the city’s Civil War story. VisitAlexandriaVA.com/mercystreet

Get all the planning information you need online.
visitalexandriava.com
and facebook.com/VisitAlexandriaVA