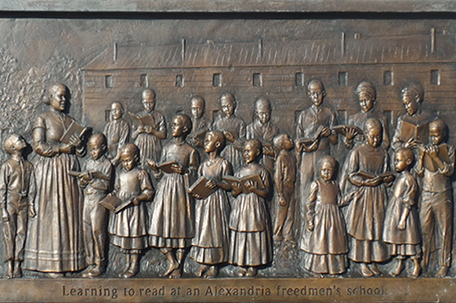 Union troops marched into Alexandria, Virginia on May 24, 1861 as soon as Virginia’s secession became effective. Realizing that their 800 troops could not stand against the more than 2,000 Union troops the Confederates met at Prince and South Washington Streets and then left the city by rail for Manassas. On May 24, 1889, a sculpture of a Confederate soldier was erected where they mustered. The soldier is depicted in “Appomattox” as looking over the battlefield after the surrender, head bowed and arms folded, facing forever south. visitalexandriava.com

Ironically the first Confederate and the first Union casualties and martyrs were both killed in Alexandria. The day the Union troops arrived in the city one of the men, Col. Elmer Ellsworth, Pres. Abraham Lincoln’s personal assistant, spied a Confederate flag flying on the roof of the Marshall House Hotel, owned by a diehard secessionist. The flag flew on a 40-ft. pole and, it has been said, could be seen by Lincoln from the White House. Ellsworth climbed to the roof, removed the flag and was on his way down the stairs when the owner, J. Jackson, shot him dead. Immediately Union Cpl. Francis Brownell killed Jackson, a deed for which he received the Medal of Honor in 1877. The Monaco Hotel stands on the site of the Marshall Hotel and a bronze plaque located outside honors Jackson as a Confederate martyr. 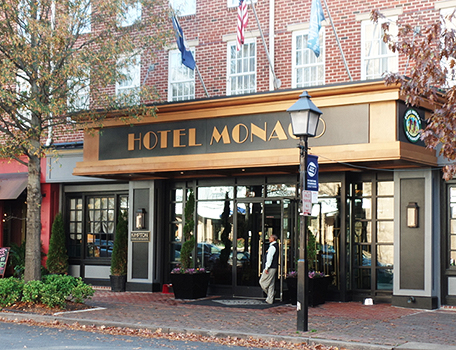 The Monaco provides perfect accommodations for a tour of Alexandria. It is located within three blocks of the major attractions as well as across the street from a stop on the free King Street Trolley line. The hotel is beautifully appointed with a seamless use of modern amenities and historic accouterments and design elements. Offerings include free WIFI, evening wine reception, fitness center, pool and pet-friendly policy. The Monaco will offer the very special “Have Mercy” Package January 17 – July 1, 2016, the ultimate way to become immersed in the city’s history and includes special themed amenities and a donation to the military. monaco-alexandria.com

Alexandria quickly became one of the most significant transport and Federal supply headquarters because of its rail, road and river access. Slaves poured into the city upon learning that it was Union held and filled the area. Just as supplies were transported out of the city, the wounded were carried in and more than 30 facilities were used as hospitals.

Beginning in January 2016, visitors to Alexandria will have a rare opportunity to interact with history in a very personal manner. On January 17, 2016, at 10 PM a new PBS television drama, “Mercy Street,” based on events in and inspired by Alexandria’s role as a hospital city, will premiere. A mind-boggling menu of creative programs, events, activities, exhibits and tours has been planned around every aspect of the six episode 1862 medical drama and individual sites will have site-specific exhibitions. pbs.org/mercystreet

The primary story related in “Mercy Street” is inspired by events that took place in the Carlyle House and the adjacent Mansion House Hotel turned hospital and staff housing.  Around 1848 James Green purchased a building at Fairfax & Cameron Streets and transformed it into a hotel. Seven years later it became the largest hotel in Alexandria when Green constructed a four story addition. In 1861 the Green’s were given three days to leave and the hotel was converted into the Mansion House Hospital, housing as many as 700 people with 500 beds. The family refused to abandon their property during Union occupation from 1861-65. The hotel was torn down in 1973. VisitAlexandriaVA.com/mercystreet

“Who These Wounded Are: The Extraordinary Stories of the Mansion House Hospital
Carlyle House Historic Park” will be on view
January 11 until July 11, 2016.
The exhibit will focus on authentic stories from the historic site. Upper level rooms will represent hospital rooms, offices and staff accommodations. On the lower level artifacts, will be on display and the role of spies, women and blacks connected to the family will be interpreted. carlylehouse.org

Several dynamic events will take place in Robert E. Lee’s home the Lee-Fendall House including the “From Slavery to Freedom Tour”
is an in-depth exploration of the slave and contraband experience in Alexandria. leefendallhouse.org

Alexandria’s History Museum, the Lyceum, has crafted an outstanding series of walking tours including “Beyond the Battlefield” and the three hour “Walking Behind the Scenes” at Mansion House Hospital. alexandriava.gov/Lyceum

The Alexandria Black History Museum’s showcase exhibition, The Journey to be Free: Self-emancipation and Alexandria’s Contraband Heritage, interprets the story of thousands of African Americans who managed to navigate their way to the city within Union lines. Freedmen might have been free but they were not safe from deprivation and disease. alexandriava.gov/BlackHistory 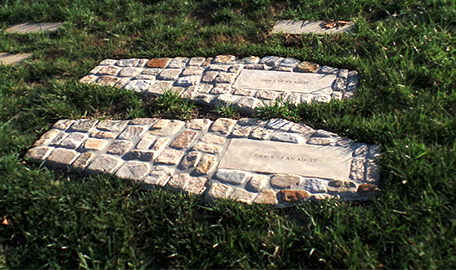 Nearly 1,800 members of the African American community was interred in the Contrabands and Freedmen Cemetery* between 1864-1869. The military government created the burial ground because of the huge death toll. Among the initial burials were members of the USCT but very quickly other black soldiers petitioned the government for black soldier’s burials to take place in the Soldier’s Cemetery, now Alexandria National Cemetery, with the same honors as other soldiers. They were reburied there in 1865 and this formal protest is cited as one of the first civil rights actions. A small number of the remaining gravesites are marked within the cemetery and lighter colored bricks along the exterior walkway are sites of additional internments.

Alexandria Archaeology Museum (AAM) is located in gallery #327 of the Torpedo Factory on the waterfront. The AAM displays objects found during area digs. A highlight of a visit here are a diorama of a Crimean War heating system used for hospital tents. This free museum has a collection of 2-million items. alexandriaarchaeology.org

Fort Ward Museum, 4301 West Braddock Road, was one of 161 forts built to protect and defend Alexandria and Washington, DC. Named in honor of the first Union naval officer to die in the Civil War, James H. Ward, the fort was taken apart and the land was purchased by African Americans to establish a community still known as Fort Hill after the war. The fort was reconstructed in 1961 and a 3-mile loop, marked with interpretive plaques, guides you through the fort. alexandriava.gov/FortWard

With all the strong emotions and the huge death toll it is not surprising that Alexandria is filled with legends and tales that mystify and scare visitors. A costumed docent walks you through the stories by lantern light on the Ghost & Graveyard Tour. Tours leave from the Ramsay House. alexcolonialtours.com/ghost-graveyard-tour

Ivy Hill Cemetery can be toured on a group tour or be self-guided. This is the burial site of the Green family showcased in “Mercy Street”. The 22.5-acre cemetery was established in the 1830s. Maps are downloadable. ivyhillcemetery.net and alexcolonialtours.com

More than 75 percent of Old Town Alexandria’s shops and restaurants are individually owned and operated. This is a foodie city and one of the Obama’s favorite places to dine.

Alexandria is a year round destination. You can end the year with a boom, touring, shopping and taking in holiday events or start the new year with a bang by immersing yourself in special “Mercy Street” activities. visitalexandriava.com and visitAlexandriaVA.com/holidays.