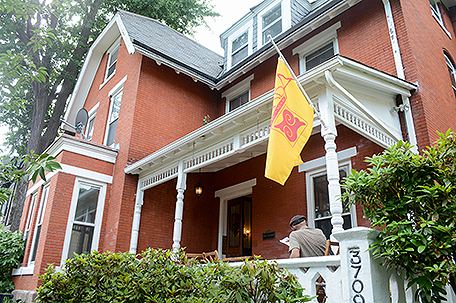 One of the things that makes a potential vacation spot somewhere you want to visit and visit often is how long it takes for you to start relaxing once you get there.

As I drove through the tree lined streets leading to the new Akwaaba Philadelphia bed and breakfast at 3709 Baring St. in University City, I figured that if I decided to make a pilgrimage here, it wouldn’t take me long to start relaxing at all.

The city’s newest and only Black-owned bed and breakfast opened on Friday, Aug. 3rd.

With a theme of “The Sound of Philadelphia”, Akwaaba —  which means “Welcome” in Ghana’s Twi dialect —  promises relaxation for visitors with a flair that emphasizes the city’s soulful side and the music that serves as its soundtrack.

Before attending a viewing party of her show on OWN, “Checked Inn”, CEO (Chief Entertainment Officer) Monique Greenwood hadn’t thought about bringing the chain of bed and breakfasts she co-owns with her husband Glenn Pogue to Philadelphia. The former editor-in-chief of Essence Magazine had already been attracting city residents to her other properties in Cape May, Washington, DC, and New York. 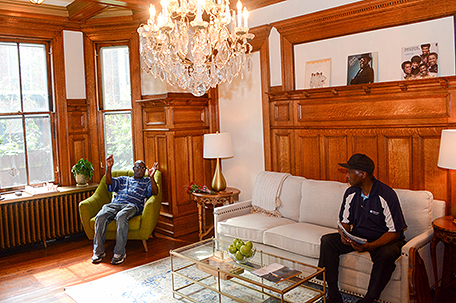 But the hospitality she received from Philadelphians when she attended the party at the Rose Petals restaurant made her consider the City of Brotherly Love for her next location.

The fact that the realtor she mentioned this to had six properties available for Greenwood to look at shortly after she expressed interest it made her consider it even more strongly.

The owner of the property she ultimately bought the Spring Hill Manor Bed and Breakfast inn near Drexel University — reinforced things. 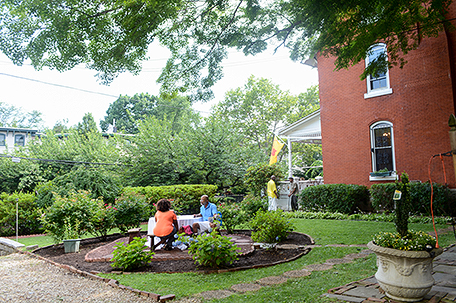 “I cold called the owner and asked her if she was interested in selling,” Greenwood said. “She said that she wasn’t at first, but that she’d sell it to me. The timing was good. Philadelphia is one of our top three feeder cities, so people already know the brand.”

What also made Spring Hill Manor a good location was its proximity to hospitals, Drexel and the University of Pennsylvania, access to public transportation and hospitals, and also to activities like the Philadelphia Zoo, Greenwood said.

On Independence Day, visitors poured into Akwaaba Philadelphia for a sneak preview of what Greenwood and local designer Rasheeda Gray of Gray Space Designs had done with the space.  While it wasn’t quite finished yet, visitors “oohed and ahhed” over the crisp white linen tablecloths in what will be Akwaaba Philadelphia’’s dining room, and the finished rooms: “Like It’s Golden”, inspired by the music of Jill Scott and the “Roots Retreat”, inspired by Philadelphia’s favorite hip-hop band.

These rooms will be joined by the “Blue Note”, which was inspired by the music of artists like Teddy Pendergrass and the group he used to front, Harold Melvin and the Blue Notes, Swoon, a space inspired by the Sound of Philadelphia’s love songs, the “Neo Soul” room, dedicated to the city’s place in that particular musical movement, and last but not least, the “Itchy Kitchy” room, inspired by the LaBelle classic, “Lady Marmalade”. 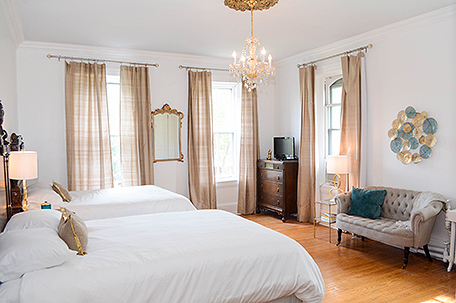 Because of everything Akwaaba offers, Greenwood expects as many local folks to take advantage of what her new space offers as she does folks from afar away, she said. With a breakfast that includes everything from chicken and waffles to gluten free and vegan options, a nightly Happy Hour, and a host of other amenities, parents in need of a short break will find a haven here, she said.

“Sometimes, you have to run away from home,” Greenwood said.

The space is also available for wedding showers, bridal showers, and other private celebrations. An average stay is $200 a night and gift certificates are available. To make a reservation for Akwaaba Philadelphia, please call 866-466-3855 or visit: http://www.akwaaba.com.