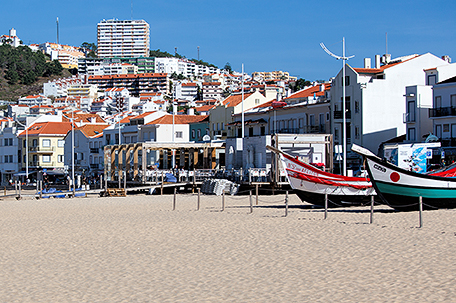 ABOVE PHOTO: The fishing village of Nazare   (Photo: Cherkasov / shutterstock)

Lisbon is so filled with activities, fine cuisine and wines that it is difficult for visitors to tear themselves away from the city. But I assure you, there are wonders throughout the country.

Some of Portugal’s most historic sites and monuments, as well as unique experiences, are to be found within a day’s drive of Lisbon. The small cities and quaint villages provide glimpses into the heart of the country.

You can opt to rent a vehicle or book a Gray Line tour to one or more of these destinations.

The fortress was rebuilt as a castle after the Moors left the town in 1148. You enter town the Porta da Vila gateway adorned with 16th-century tiles detailing the Passion of Christ.

The main street, Rua Direita, is lined with shops, some of which sell Ginja de Óbidos, a traditional cherry liquor in a chocolate cup made to be eaten after finishing the drink. After a few of these, you can walk the one-mile wall perimeter and take in the panoramic view of the exterior vineyards, farmlands, the intact, 1.5-mile, 16th-century aqueduct and the interior flower-draped city streets.

The town was so beautiful that it was designated the House of Queens in 1281 after King Dinis gave it to Queen Isabel as a wedding gift. The tradition continued for 600 years. In 1444, the Santa Maria Church was the scene of the wedding of King Afonso V, aged 10, to Isabel of Coimbra, aged 8. The church dates from the 1100s and was constructed on the site of a mosque.

Alcobaça is home to the UNESCO World Heritage Site, the Monastery of which is Portugal’s largest church. It was founded in 1153 to commemorate the removal of the Moors; construction was completed in 1223. There is much to see here, including the vaulted ceiling, Cloister of Silence, Room of Kings and the tombs of Portugal’s most famous lovers, Prince Pedro Inês de Castro.

Pedro was married to Constance, but he carried on a secret love affair with Inês, who was Constance’s lady-in-waiting. When Constance died in 1345, he was denied permission to marry her by his father King Afonso IV, so he went away and lived with her as his wife. The king ordered three men to murder her; she was decapitated on January 7, 1355. Pedro was so he rebelled against his father in 1355 and was crowned king in 1357. Two of the murderers — they never located the third — were executed by having their hearts torn out.

He had her exhumed, crowned queen and made members of the court kneel and kiss her hand. In 1360, Pedro interred her in a tomb in the Royal Monastery of Alcobaça. Pedro and Inês rest in the nave in ornate tombs with feet facing one another so that their first vision in the afterlife will be each other.

Prince Henry the Navigator’s tomb is located in the Monastery of Santa Maria da Vitóriain Batalha.  The tombs of King João and his wife are located in the Chapel of Founders there as well. There is a superb 1514 stained-glass window behind the choir. Architecturally and historically this is an important and impressive edifice.

Nestled in a bay is the 4th-century fishing town of Nazaré, where visitors can soak up the atmosphere of a village seemingly arrested in time. Wooden fishing boats line the shore, some with an eye painted on the prow, reminiscent of Phoenician boats, along with fish drying racks. The town is believed to have been named after Nazareth in the Bible.

There are seaside restaurants along the Avenida Marginal. In times past the “fishwives” of the town waited for the fishermen on the seafront and for warmth and superstition they wore the traditional seven skirts of Nazaré and wooden shoes. Lucky visitors may still see women dressed that way. Nazaré is an international surfing paradise because of the enormity of the waves here. Hugo Vau broke the world record in January of 2018 by riding a 100-ft. wave, Big Mamma, at Praia do Norte.

In the 7th-century it is believed two sailors brought a statue of the Black Madonna to Nazaré from Nazareth. During the years the Moors ruled, the statue was hidden and rediscovered in the 1100s. A chapel was constructed where she was discovered, and in 1377 a larger church was built to accommodate the large number of pilgrims. The Black Madonna is still on view.

Around 1158, a crusading knight Don Gonçalo Hermingues, captured a Muslim princess named Fátima. They fell in love, she converted to Christianity and they married. Soon after she died leaving a heartbroken husband. He joined the abbey of Alcobaça, and when he moved he took her ashes with him and named the place where she was buried after her. A chapel was built in her honor.

Fátima is one of the most famous Christian religious sites in the world and receives millions of international visitors annually. Its miracle is said to have to taken place from May 3 to October 13, 1917. Three local children — Jacinta 7, Santos 9 and Lucia 10 — told their parents that the Virgin Mary appeared to them in the top of a tree while they were tending their sheep.

Only Lucia said that she spoke to Mary, who told her that she would reappear on the 13th day for the next 5 months. Word spread and by the final visit, 70,000 pilgrims gathered there.

The Sanctuary of Fátima complex has more than 15 individual sites. The Neo-Baroque Our Lady of the Rosary of Fátima limestone basilica was constructed from 1928 to 1953 with a 231-ft. tower. Within the basilica are the tombs of Jacinta, Santos and Lucia.

The stained glass windows depict the events. The 8,633 seat Basilica of the Holy Trinity, the third largest Catholic church in the world, was built from 2004 -2007. The Chapel of the Apparitions is situated on the spot where Mary is said to have appeared.

A marble pillar and statue of Mary marks the exact spot; the tree in which she is said to have appeared is adjacent to the chapel. There is a full schedule of activities. No admission fees are charged. The homes of the three children are located outside of the complex.