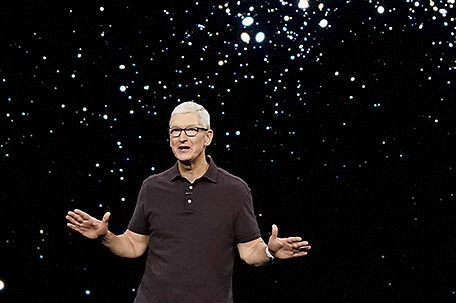 NEW YORK — Apple Music is about to cross a huge milestone, offering its eye-and-ear-popping 100 millionth song on the streaming service.

The music giant tells The Associated Press that internal data indicates Apple Music will reach the heady mark on Monday. Every day, 20,000 singers and songwriters release music on the service.

“It’s a huge, huge number,” Rachel Newman, Apple’s global head of editorial and content, told the AP. “It really is possible to create music and record it and release it more than ever before in the history of music, which we think is pretty incredible.”

While the actual song that brings Apple Music across the threshold won’t be known, there’s a good chance it will not originate from the U.S. or even be in English as the service sees more and more music arrive from all over the world.

When iTunes was launched, the service had music in 200 languages and dialects, with half of the content in English. Now, 40% of Apple Music’s offerings are in English and the number of languages and dialects are up to 350. The platform’s top charts — once the domain of the U.S., U.K, Canada and Australia — are now populated by tunes from Japan, Colombia, Ghana, Nigeria and South Korea.

The milestone has been fast approaching as the globe gets more digitalized. The number of Apple Music songs has doubled in the last four years, from 50 million in 2018, with the pandemic believed to have accelerated the timetable as people in isolation looked for creative outlets.

The 100 millionth song could perhaps come from an artist as yet unknown, Apple Music added.

Apple Inc. started iTunes in 2003 with 200,000 songs feeding its iPods and launched Apple Music seven years ago — now feeding iPhones — with subscribers in 167 countries and regions.

It also says its customers are not just listening to whatever’s new; they’re exploring back catalogues of artists. In 2015, when Apple Music launched, the top 1,000 songs made up 20% of the plays. Now they make up 10%. The average song’s release date is from March 7, 2017, a number pulled down by listeners going back in time.

The music streamer is celebrating the milestone by launching on Monday a new editorial series called Apple Music Today. The streamer’s editorial team tells the story behind one new or old song — now with 100 million to choose from each time.

“We believe that it’s both an opportunity for us to help all of our subscribers connect to music that they may have forgotten about or not know about,” Newman said. “And, also importantly, finding a new platform for storytelling. We believe that’s one of the things that we’re doing to preserve the artistry in music.”