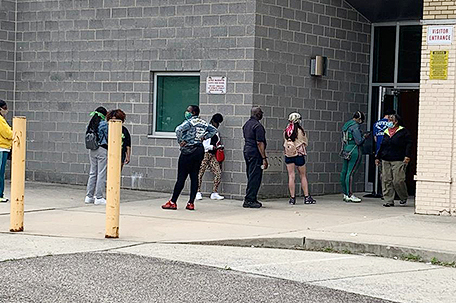 If you hung around long enough at the George Washington Carver High School for Engineering and Science in North Philadelphia during Tuesday’s Pennsylvania Primary, you got a good cross section of the voting experience.

By 5:30p.m. on Tuesday, about 800 people had stood in a line that had at times stretched around the school to make their voices heard at the voting booth, said Elnora McMullen, the judge of elections.

For those who chose to stand in line, their voting experiences varied.

There was Deborah, Qaadiri and Jacuita Purifoy, who had to play a game that more than a few voters had to play as the city’s usual compliment of polling places had been paired down to less than 200: Find the Poll!

“I usually vote at the Church of the Advocate on North 20th Street,” Qaadiri said. “The sign on the door of the church told us to go to 25th Street to vote, but that was the wrong place. Finally, we got here.”

“It feels like they were making it difficult for people to vote, Qaadiri continued. “If this was your first time voting, you’d probably get frustrated and leave.”

But Terrence Johnson was surprised at how well his voting experience went.

“It wasn’t as bad as I thought it would be,” he said. “They told you what table to go to and what booth. It went really well. I didn’t have an issue at all.”

Due to the coronavirus pandemic, the primary, which usually takes place in April, was moved and all Pennsylvanians were able to vote by mail for the first time. More than 200,000 Philadelphians took advantage of that opportunity.

Getting that ballot to the proper place took a little research, however. You couldn’t drop them off at the polling place, but it was also difficult to find out where to put them.

This made election officials have to learn new skills, said Armstead King Jr. a judge of elections in Mt. Airy.

In fact, the difficulties in getting a mail-in ballot kept many from using that option.

“I would have liked to vote by mail,” Deborah Purifoy said. “But the information on how to do it came out late.”

“I didn’t trust that,” Melissa P. Keith, another voter on line at Carver High said of vote by mail.

Due to another complication some Pennsylvanians have faced recently, the protests related to the death of George Floyd in Minneapolis, Gov. Tom Wolf extended the counting date for several cities, including Philadelphia to June 9, as long as ballots were postmarked on Tuesday.

But while voters took to the polls on Tuesday, none of the mail-in (or dropped off) ballots had been counted at press time. So while the Philadelphia delegation could change a lot due to potential upsets, none of these results will be official for at least a week.

At press time, incumbent Rep. Brian Sims was down by four percentage points to his opponent, Marisa Shaaban.

Sims is the first LGBTQ member of the State House. State Rep. Maria Donatucci has a much higher mountain to climb to overtake her challenger, Regina Genell Young, who leads her by over 1,700 votes. State Reps. Roni Green, and James Roebuck are also behind in their races.

In the State Senate, Sen. Larry Farnese is behind his opponent, Nikil Saval by more than 4,800 votes at press time. Saval, co-founder of the progressive group Reclaim Philadelphia is an editor and author who received endorsements from City Councilperson Isaiah Thomas and U.S. Sen. Bernie Sanders. Sen. Daylin Leach, who has been battling allegations of sexual harassment and inappropriate behavior, is also losing to challenger Amanda Cappelletti by 1,800 votes.

Lisa Deeley, chair of the City Commissioners, has said that she considered Tuesday’s elections to be a dress rehearsal for the November elections and hoped to have all of the kinks worked out by then.

The Rev. Norman Grown, of North Philadelphia’s Tenth Presbyterian Church, hopes the line around the school is also a dress rehearsal for November.

“I think that this is the kind of turnout we need,” he said. “I’m impressed with this turnout. I think it’s going to be more than this in November. I think that the people are seeing exactly what is happening in the White House and how our rights are being impacted.”