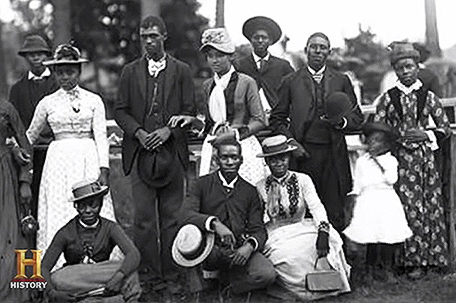 ABOVE PHOTO: Greenwood section residents of Tulsa before the massacre. (Photos Credit: The HISTORY Channel in support of “Tulsa Burning: The 1921 Race Massacre” documentary)

“I never heard about the massacre; they called it a riot,” said Emmy Award-winning actress and Tulsa native Alfre Woodard.

From 1899 through 1921 in Oklahoma, one of the wealthiest Black communities in the U.S. had it all — land that was Black-owned with hundreds of Black homeowners. A community of over 600 Black-owned businesses, including movie theaters, hotels, an auto repair shop, doctors and law offices. African-Americans from around the country flocked there for an abundant life free from racial oppression.

This is not a fairy tale. This is a true story.

Let’s pivot to imagine something horrible beyond belief — that 35 city blocks of businesses and residential homes in Philadelphia were being bombed by airplanes with incendiaries over an 18-hour period. The only option is to stay inside your business or residence that was on fire, or run outside and be shot. These are your only two options.

Imagine further horror. Equally invested in the community’s demise, are local police and fire departments who act as co-conspirators by allowing for the shooting and lynching of men, women and children to continue and letting buildings burn to the ground instead of intervene.

The reason for the massacre — resentment of your mere existence as a Black person and building wealth that surpassed that of some nearby white communities.

To add insult to injury, insurance claims of any who survived are denied.

And, none of the terrorists and murderers are held accountable or charged for their crimes.

Tragically, this is what actually happened in Tulsa, Oklahoma from May 31 through June 1,1921 in a Black, self-sufficient wealthy community known as the Greenwood District. This event is referred to as the Tulsa Race Massacre.

The justification cited for the massacre was wrapped in a lie based on a rumor that a Black teenager tried to assault a white woman on an elevator. Black men in the community had to go to the jail to ensure the arrested teen would not be lynched.

Over 300 Black persons died after the 18-hour terrorist attack, although the death toll is believed to be much higher. Their homes, churches and businesses were looted. Their lynched, burned and bullet-ridden bodies were dumped in mass unmarked graves.

Families were not able to locate, have funerals or proper burials for their loved ones. Many survivors never heard or saw their loved ones and neighbors again after the 18 hours of terror. It is presumed that those persons missing or never heard from again were killed in the attack.

The story doesn’t end there, but continues today with resilience and determination with excavations to find more remains of loved ones buried in mass graves (ten were found during an excavation last year), and lawsuits filed as recent as 2020 for reparations on behalf of descendants of the massacre and demands for accountability. The Black Tulsa community in actuality still has not recovered what was lost. The Greenwood District that once covered 35 city blocks is now only a few blocks long.

Upon the centennial anniversary of one of the most heinous domestic terrorist attacks in U.S. history, The HISTORY Channel will air Tulsa Burning: The 1921 Race Massacre on Sunday, May 30 at 8/7c.

It is a massacre that was whitewashed and downplayed for several decades until survivors and descendants began to openly speak in the mid to late 1990’s about surviving the massacre or were told stories from their family members.

In academic settings, the event was referred to as a riot which is a bold untruth. It was a systematic effort that deputized whites unleashing them on this community to kill Black families, destroy their businesses, obliterate their wealth and steal their land.

“I never heard about the massacre; they called it a riot,” said actress Alfre Woodard, who is a Tulsa native, during our conference call.

“We never talked about that until I was in seventh grade,” Woodard, who is now 68, continued. “They practically closed the shades down and passed out pages about what was called a riot. They of course labeled it a riot to lay blame at the feet of the Greenwood community.”

“We couldn’t take those sheets home. We had to pass them back to the front and they kept them under lock and key because I was going to a public school,” Woodard recalled about how secretive it was to even discuss the massacre in Oklahoma.

For nearly 50 years the mainstream newspapers in Tulsa would not report, acknowledge or even mention the massacre.

The survivors who stayed kept silent out of fear and were regulated to low-wage occupations working for whites after losing their wealth. Some were able to rebuild. Some relocated.

Mary E. Jones Parrish, a massacre survivor and trained journalist, chronicled the experience of community members and her own experience of fleeing the violence with her daughter in her 1922 book “Events of the Tulsa Disaster” which was originally published privately.

The 2001 report of the Oklahoma Commission to Study the Tulsa Race Riot of 1921 noted that Greenwood District also had dentist offices, a chiropractor, a library, a hospital and two Black publishers printing newspapers.

The groundbreaking new documentary airing May 30 is an emotional yet empowering watch.

“I was learning things about my own family,” said NBC Today Show’s Sheinelle Jones, whose family is from Lincoln County, Oklahoma.

The documentary dives into the origins and the history that led to the founding of the Greenwood District referred to as the “Black Wall Street” due to its thriving community and wealth. African Americans originally came to Oklahoma as slaves of Native Americans. The African Americans were emancipated and provided land by the Treaties of 1866. The Greenwood District was later founded by O.W. Gurley, who bought 40 acres of land. Gurley was a serial entrepreneur and wealthy Black landowner born to free slaves.

“I think that accountability… we’re doing some of that now. The fact that we’re talking about the race massacre in and of itself, is something that had not been discussed for years,” said Brenda Nails-Alford, who is a descendant of the massacre survivors.

As for Rev. Robert Turner, the pastor of Vernon AME Church whose basement survived the 1921 bombing, he presses on the need for justice as well as accountability.

Tulsa-based attorney Damario Solomon-Simmons, who represents three centenarian survivors, has sued the city, county, state, Tulsa Regional Chamber and other entities for restitution and other forms of reparations.

There have been previous lawsuits throughout the decades.

“I will never forget the violence of the white mob when we left our home,” she testified. “I still see Black men being shot, Black bodies lining the street. I still smell smoke and see fire. I still see Black businesses being burned. I still hear airplanes flying overhead. I hear the screams.”

Viewers of the documentary will be inspired, empowered and emotional learning what this Black community accomplished in Greenwood from 1899-1921. It shows what could have been had this wealth been passed down to their children and descendants.

It is important to note that there were more Black cities in the U.S that were attacked and residents massacred through racial violence for simply achieving greatness and self-sufficiency.

“There cannot be any justice until there is proper respect, restitution and repair,” said attorney Solomon-Simmons.