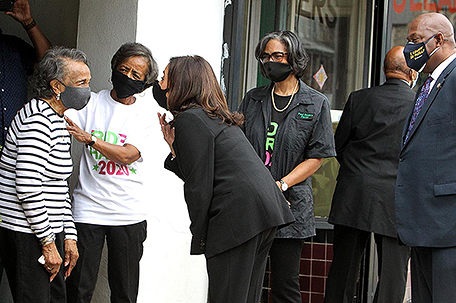 Sen. Kamala Harris, the Democrats Vice Presidential nominee, came to West Oak Lane to share the vision that she and Joe Biden have for America and to spend some time with her “sisters.”

If you’re a politico from out of town, and your tour guide is U.S.Rep. Dwight Evans (D-3rd Dist.), chances are that you’re going to take a walk down Ogontz Avenue in West Oak Lane while you’re in town.

So, it was no surprise to anyone in the political know when Evans brought California Sen. Kamala Harris to the West Oak Lane business corridor when she came to visit Philadelphia last Thursday.

The Democratic nominee for vice president walked greeted shop owners, residents, shop patrons — most notably a man who took stepped out from under a hair dryer in a barbershop to visit with Harris — and other passersby as she and Evans walked down Ogontz Avenue.

The first place she stopped was Paul Beale’s Florist, which has been in operation since 1971.

Paulette Beale Harris, the owner of Paul Beale’s Florist, was standing at the door with her 92-year-old mother wearing a black Biden-Harris 2020 t-shirt with writing in the colors of Harris’s sorority, Alpha Kappa Alpha. As Harris greeted her mother, who was celebrating her birthday, Paulette Beale Harris wished the VP nominee luck.

“We’re just waiting for you to become vice president so that we can stay here another 50 years,” Beale Harris said. “We’re not sure we’ll make it otherwise.”

Harris was in town to campaign for herself and her running mate, former Vice President Joe Biden, in a swing state that the Democrats lost in 2016. Her presence dovetailed with National Black Voter Day on Friday and National Voter Registration Day on Tuesday.

Sen. Harris also took the time to sign copies of her book “The Truths We Hold” and take pictures with young children.

She later stopped by Relish, the place where Evans holds his annual Election Day luncheon. The restaurant, owned by the Bynum Brothers, is among their locations that have been closed since the coronavirus pandemic began.

From Ogontz Avenue, Harris proceeded to  a Sister To Sister Mobilizing In Action event. The event was moderated by actress Sheryl Lee Ralph and co-hosted by City Councilmember Cherelle Parker and She Can Win, an organization whose mission is helping women who want to get involved in public service gain the information and means to do so.

The event was held at a private home, where Harris was greeted by performers from Philadanco.

She also met with Latino leaders at Taller Puertorriqueno in North Philadelphia during her visit.