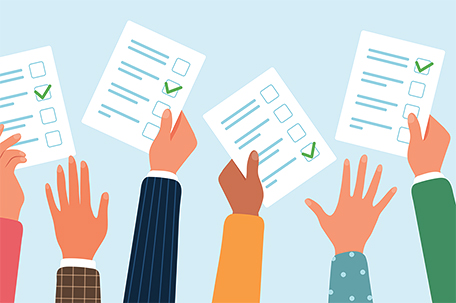 As it has for more than 170 years, The Associated Press will count the nation’s vote in real time on Election Day and report the results of presidential, congressional and state elections on Nov. 3 and beyond.

AP will use that vote count to declare winners in some 7,000 races, so the world knows who wins not only the White House, but control of Congress and every state legislature.

“There is no national election commission in the United States that tells us who won on Election Day,” said David Scott, a deputy managing editor who helps oversee AP’s coverage of elections. “Statewide results aren’t available in every state, either. If we want to know who the next president will be, we’ve got to do the math ourselves — county by county nationwide.”

To do so, AP uses a 50-state network of local stringers who Scott said have trusted relationships with county clerks and other local officials built up over years of election night reporting. These stringers collect votes at a local level, while other AP journalists gather results from state or county websites, as well as via electronic data feeds from states.

That vote count is then transmitted to AP members and customers across the country and around the world, Scott said, powering their election night maps and filling the vote total graphics shown online and on air.

On election night, state-based analysts and editors in Washington at AP’s Decision Desk also use that vote count to “call races,” or declare the winners. Along with the vote count, Scott said, the decision team uses additional information provided by AP’s election research team, such as demographic data about a state and statistics about advance voting, to make race calls.

“AP does not make projections or name apparent or likely winners,” Scott said. “If AP cannot definitively say a candidate has won, we don’t speculate.”

Most famously, he said, AP did not call the closely contested race in 2000 between George W. Bush and Al Gore, standing by its assessment that the margin in Florida made it too close to call.

HOW AP GATHERS THE VOTES

Shortly before polls close, roughly 4,000 stringers — temporary freelancers — arrive at county election offices. As officials begin to release results, these stringers phoning in the raw vote totals to AP colleagues around the country.

More that 800 vote entry clerks, working remotely this year because of the coronavirus pandemic, answer those calls, take down the tally and enter the results into AP’s election database. Since many states and counties display their election night results on websites, some clerks monitor those sites and enter those results into the database, too.

The clerks who take the stringers’ calls ask questions to make sure the information they are receiving is accurate.

These include asking whether there are problems in the stringer’s county and challenging the details if the results seem suspect.

As votes are entered, automated checks look for discrepancies or inconsistencies with a county’s previous voting history or other data. For example, if more voters are reported as being cast than there are registered voters in a county, an alert will pop up on the clerk’s screen and summon a supervisor.

PRECINCT REPORTING CAN BE TRICKY BUSINESS

When tabulating results, AP publishes the percentage of precincts reporting alongside the vote count. In many states, this figure is a reasonably accurate estimate of how many votes have been counted — particularly in states that combine and report results of ballots cast in advance and those cast on Election Day.

However, Scott said, the percentage of precincts reporting can be deceiving in some states. In some jurisdictions, election officials report all of the advance vote as being from a single precinct. A precinct can also be counted as having reported even though it hasn’t released all of its results. This is why votes can be added to the count in a race even after 100% of precincts have reported.

This issue is often evident in a race with a large percentage of votes cast in advance. While this has always been the case, Scott said, it may be particularly noticeable this year because the pandemic has led so many more people to vote early.

For this reason, AP also publishes an estimate of the percentage of the vote counted for all statewide races, such as those for president, governor and U.S. Senate.

While this estimate will fluctuate on election night, Scott said, it will provide the best possible look at how many votes are in the tally and how many there are still left to be counted.