VFW-supported event is looking for vets to exhibit, perform 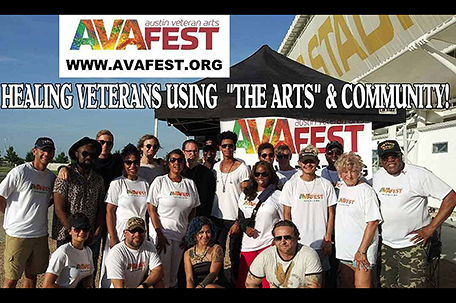 The Veterans Suicide Prevention Channel (VSPChannel) is producing the 4th Annual Austin Veteran Arts Festival (AVAFEST) in the city of Austin, Texas, from Oct. 12 until Nov. 12.

There will be eight art exhibits that veterans can participate in, and all of them will be shown online.

Glenn Towery, a member of VFW Post 856 in Austin and founder of the VSPChannel and AVAFEST, said that through this collaborative effort, he plans to showcase the healing power of art.

Organizers of the Austin Veteran Art Festival are seeking artists of all kinds for the 2022 festival. Started by VFW member Glenn Towery, the festival will feature everything from music and dance to poetry and visual art. The event will run from Oct. 12 until Nov. 12 at different venues throughout the city of Austin, Texas, and also on the Veterans Suicide Prevention Channel on Roku.

“AVAFEST gives veterans a platform to show and practice their art and encourage them to enjoy the healing elements inherent in practicing the arts,” Towery said.

“We invite veterans, military personnel and their immediate family members to participate in the festival, no matter how old or young they may be.”

“We also are in search of new one or two act plays by veterans,” Towery added. “All are invited to apply who use the arts as a form of mental, emotional and spiritual healing.”

Selected performances will be showcased either in a select venue in the city of Austin and/or appear on the VSPChannel ROKU television channel, which can be accessed online at: https://veteransartsandwellnessnetwork.org/watch-live/.

Select artists’ work to be featured in special exhibit

Thomas C. Lea III was a muralist, illustrator, artist, war correspondent, novelist and historian. He was a correspondent in the South Pacific and Asia during WWII.

Ten combat veterans will have their art selected to be exhibited along with Lea’s works. The call for art submissions is open now and ends Aug. 15.  This exhibit will open on Oct. 22 and runs until Dec. 3.

Only veterans who have experienced combat are eligible to submit for this exhibit at: [email protected]

“This year’s AVAFEST will continue to showcase veteran and military talent and display the healing elements that can be found in practicing the arts,” Towery said.

“It also will emphasize other forms of non-medicinal therapies such as a health and wellness seminar, EMDR, Yoga, Tai Chi, mindfulness, meditation and more.”

There will also be a veteran’s book fair to help veterans and their family members who are writers, to promote and sell their books.

AVAFEST is produced, in part, with the support of the city of Austin and is endorsed by several veterans’ organizations, including the VFW.

Be sure to check out the September issue of VFW magazine for an article on Towery and how the VSPChannel came to be.

To learn more about how you can sign up to be a part of AVAFEST 2022, contact AVAFEST at: [email protected], or visit: www.vspchannel.com, or www.avafest.org.