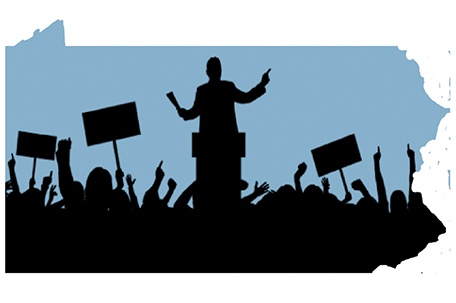 Is the Philadelphia area ready to help voters participate in a Pennsylvania primary that will feature mail-in voting? The answer depends on who you ask.

If you’re trying to find Danyl Patterson these days, you might want to start on Facebook Live.

Every day at 3:30pm, Patterson, an attorney running for the Democratic nomination for State Representative for the 190th District, hosts “Legal Lessons for Life,” a program that not only helps people in the district get help with legal matters but also tackles other issues, like how to take advantage of the stimulus programs in the federal CARES Act. In addition, she uses the platform for interviewing community members, business owners and other district residents.

Prior to the coronavirus forcing everyone indoors due to a stay-at-home order, Patterson, like just about everyone else running for office in the Pennsylvania primary, was out knocking on doors, shaking hands and having face-to-face conversations with voters in preparation for voters to head to the polls on Tuesday.

But now that the primary has been moved to June 2, and the Pennsylvania Legislature has passed a law giving everyone the option of voting by mail, Patterson, like every other candidate vying for office in the primary, has had to change the way she gets her message out.

Fortunately, Patterson said, she was prepared for that.

“I’m thankful that my team is innovative,” she said. “I took all of my canvassers off of the streets, because we couldn’t put people at risk and a lot of the people we were talking with were also the most vulnerable to the virus. Now, we’re using computers and phones.”

“We’re making the best of the situation,” said Darisha K. Parker, a candidate for State Representative for the 198th District. “This is my first campaign, and I was looking forward to interacting with the voters face to face. Now, I’m having these interactions with a phone call.”

The candidates are making the adjustments they need to help voters get what they need to fill participants in the June 2 Pennsylvania primary.

Whether the apparatus designed to make sure that votes are counted, and that the vote itself isn’t more of a challenge than it has to be, depends on whom you talk with.

For Philadelphians to vote usually requires extensive training for poll workers, and the utilization of a network of ward leaders, committee people and poll workers.

Due to the coronavirus and some of the changes this has necessitated, that training hasn’t happened yet because there are a lot of unknowns, said Lisa Deeley, chairperson of the Philadelphia City Commissioners.

For example, if you want to vote in person, is there a way for you to do that safely?

Once training is allowed to begin, it will be done virtually using programs like Zoom to help, Deeley said.

These unknowns are also making things difficult for ward leaders and committee people, the people who help man and staff polling places to know what they should do next, said Councilman Kenyatta Johnson. In addition to representing the Second Councilmanic District, Johnson is the leader of the 36th Ward in South Philadelphia.

“We’re in a holding pattern,” Johnson said. “There’s been no official determination from the City Commissioners. We’re strategizing on ways to get as many registered voters as possible to use the mail-in ballots.”

Judith Robinson, a committee person for the 32nd Ward, 13th Division in North Philadelphia, said there has been some preliminary discussions, not only about the voting process, but also about the voters themselves.

“We’re talking about expanding the number of voters,” she said. “We have a list of registered voters, some of whom don’t come to the polls. We’re trying to get those voters. We’re also trying to figure out if there’s going to be an actual polling place here, and if so, where.”

One of the things that is commonly associated with Election Day in Philadelphia is what’s known as “street money,” the money that poll workers, election judges and other election officials earn  for their contributions to the primary.

Now, more than ever, that money is vital to those who receive it, said Anton Moore, leader of South Philadelphia’s 48th Ward.

“We need to make sure that people get paid,” he said. “People are having a tough time putting food on the table right now.”

Mail-in ballots must be received by the Board of Elections on June 2 to count, Johnson said. Most ward leaders are trying to come up with a plan to get those ballots from seniors and others who may not have been able to mail them in time to the BOE, he said.

Deeley, however, has requested an extension for mail-in voters that would allow them to have a little more leeway when it comes to their ballots. Under Pennsylvania law, absentee ballots are considered valid until June 9. On Thursday, the Pennsylvania Senate held a hearing to discuss extending that courtesy to all mail-in voters, she said.

Seniors and their ability to vote has been a real concern to those who handle elections. Under normal circumstances, many polling places are in senior citizen communities and residences.

Bonnie Marcus is a Democratic committeeperson and Judge of Elections in a section of Chester County that includes a retirement community. While getting the word out is relatively easy because the community is largely self-contained, social services has had to help her do certain things, she said.

“In the past, if someone needed help with their ballot, we could come to their space and help them,” Marcus said. “Now, we have to get help from Social Services.”

That hasn’t stopped her area from being one of the best in Chester County in terms of turning in mail-in ballots, Marcus said.

While the coronavirus has changed how voting is going to be done this time around, it doesn’t change the mission of the Committee of Seventy, a good government watchdog group that also provides voter education, David Thornburgh, the president and CEO of the group, said.

In addition to the Facebook Live interviews that Thornburgh has been doing with candidates to inform the public and the non-partisan voting guides that the group will produce, the Committee of Seventy is looking at the election itself to see how it goes with the combination of mail-in voting and some in person voting.

It’s best to work the kinks out now before the November elections —- and the record turnout he’s expecting —- happen, Thornburgh said.

“We’re going to be giving voters a survey so that they can share their experiences with us,” he said. “We want to see what worked, and also what didn’t.”

The social distancing that Pennsylvanians have been doing might make the process a little closer to normal by November, said Robinson, the committeeperson in the 32nd Ward in North Philadelphia.

“It seems like people are starting to get the message,” she said. “I was concerned when I went out 10 days ago. There were people out in groups and no one had any masks on. I went out a few days ago, there were more people wearing masks and practicing social distancing.”

In the end, said Patterson, the candidate for the 190th District, the changes made to the Pennsylvania Primary due to the coronavirus have given the candidates running a chance to show that they’re up for the job.

If you need to apply for a mail-in ballot, please go to www.philadelphiavotes.com.