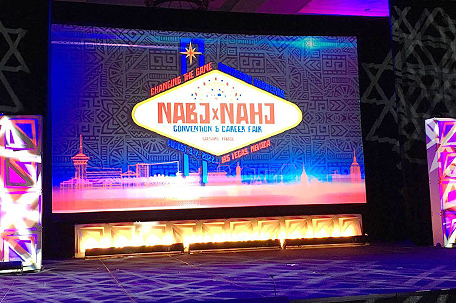 But thanks to a combination of lower COVID cases, vaccination and masking requirements, and a desire on the part of members of both organizations to meet in person, NABJ and NAHJ held a joint convention and career fair at the Caesars Palace Hotel in Las Vegas last week.

With a theme of “Changing The Game: Rompiendo Barreras,” nearly 5,000 journalists of color gathered at the casino to participate in workshops, hear from newsmakers, honor those who had distinguished themselves as journalists this year and celebrate the chance to connect.

NABJ President Dorothy Tucker was happy to see so many people take a chance and travel to this joint meeting and participate in all it had to offer.

“I thought this day would never come,” she said. “Thank you for trusting us and thank you for coming out.”

It was also a chance to reflect on what both groups have been able to accomplish, despite a combination of a virus that shows no signs of abating and a business that still presents barriers to entry for journalists of color.

“Our theme represents all that we have accomplished over the past year,” said Nora Lopez, NAHJ president. “We are powerful forces as Black and Brown journalists, united with purpose in our storytelling and elevating our membership into leadership roles to create lasting change.”

In order to even register for this year’s conference, NABJ and NAHJ members had to show proof of vaccination through the CLEAR App. Once participants had arrived at the conference, they were required to wear masks. There was also a mask included in the convention bags given to each participant and most of the employers at the career fair included masks in the collection of tchotchkes available for guests to take home.

Dr. Anthony Fauci, the infectious disease specialist who announced earlier this year that he would be leaving his position as the nation’s point person on COVID at the end of the year, participated in a video chat during the conference.

Among the sessions held during the conference was a session on how mass shootings like the one in Uvalde, Texas were covered featuring NBC News anchor Lester Holt, NPR culture critic Eric Deggans, and other journalists that had been on the ground during the mass shooting. The panel included tips for ways that journalists could avoid creating further trauma for those who have to stay in those communities by being respectful of them and their needs while reporting.

There was also a workshop on the plight of missing people of color. Forty percent of the people missing in America are people of color, but reporters find themselves having to fight for the right to tell their stories. The founders of the group Black and Missing were among those participating in that workshop.

On Saturday, the last day of programming, White House Press Secretary Karine Jean-Pierre did a question and answer session with Presidents Tucker and Lopez about the Biden Administration, what it’s done for people of color, and the midterm elections.

Several Philadelphia-based journalists, including SUN sportswriter Chris Murray, were honored for their work during the 2021-2022 calendar year at NABJ’s Salute to Excellence. Murray was honored for his series of columns on Black, female Olympians and the scrutiny they faced as the Tokyo Olympics approached. Also honored with STE awards during the ceremony were Philadelphia Inquirer reporters Melanie Burney and Elizabeth Wellington and WHYY afternoon host Cherri Gregg.

Next year’s NABJ convention will be held in Birmingham, Alabama.

NAHJ Condemns Exploitation of Deceased Family at the Border