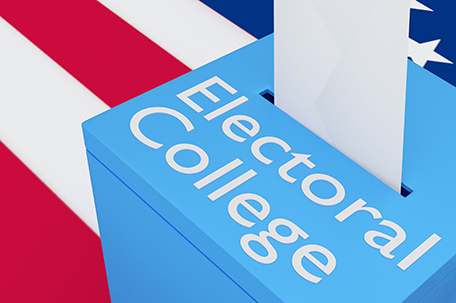 On Monday, the Electoral College meets to officially vote for the President of the United States. But does it still make sense?

And sure, Texas Sen. Ted Cruz has been asked by President Donald Trump to argue the case in front of the court should the Supreme Court decide to entertain the disenfranchisement of millions of voters.

For most of the republic’s existence, the Electoral College has been seen as something that we use, but don’t pay a lot of attention to. But in two of the last five election cycles, most notably 2000 and 2016, the person that the majority of Americans wanted to be president was denied the office due to the Electoral College.

Just what is the Electoral College?

If we’re honest with ourselves, the Electoral College was the Founding Fathers attempt to, well, idiot proof the presidency.

Established in Article II, Section 1 of the Constitution, the Electoral College was put in place officially to keep the voters in smaller states from being overruled by the larger states when it comes to picking the president.

Unofficially, it was the Founding Fathers way of making sure that the so-called uneducated masses didn’t pick the president directly. Heck, until the 17th Amendment was ratified in 1913, Senators weren’t elected via popular vote, according to our friends at the National Constitution Center. State Legislatures did that job.

The College, which meets every four years, has 538 Electors, and the number of electors each state is allotted is the same as it’s Congressional Delegation. The District of Columbia is given three, which brings us to 538. Pennsylvania has 20 electors and while some of them might be state legislators, none of them are federal elected officials. Under the law, federal officials aren’t allowed to be electors.

State legislatures decide how these electors are chosen and the rules that govern them. Most states choose their electors and who gets them using a winner-take-all system while two states — Maine and Nebraska — use the District method, which hands out electors based on congressional district. In some states, electors are selected by the state’s political parties while in others, electors are voted on in the same way that elected officials are chosen, at the ballot box.

What will it be doing on Monday?

That’s because the Electoral College meets in the Pennsylvania House at noon on Monday. The state’s 20 electors, which include State Sen. Sharif Street, Attorney Gen. Josh Shapiro, City Councilmember Cindy Bass, and 2020 Auditor General candidate Nina Ahmad and Ryan Boyer, business manager for the Laborers District Council, will take his or her own ballot and vote. Electors are paid for their time.

The official copy of those ballots goes to the President of the Senate, or as we usually call him, Vice President Mike Pence. Secretary of State Kathy Boockvar, the National Archives and the presiding judge in the district where the electors are meeting — Chief Judge John E. Jones —- according to the National Conference of State Legislatures. Judge Jones’s ballot serves as a backup ballot should the official copy wind up lost or destroyed.

Considering the war that Republicans have been waging on the Electoral College, Chief Justice Jones’s copy may take on an outsized importance. A lawsuit filed by prominent Republican legislators designed to keep the Democratic electors from voting on Monday was just thrown out of court on Wednesday.

Now the question always comes up of what happens if an elector decides that he or she doesn’t want to follow the will of the voters and cast his or her vote for someone else?

While the whole “faithless elector” thing doesn’t happen often — before the seven electors that did it in 2016, there hadn’t been a faithless elector since 1972 — it’s something that states have taken into consideration. Many states have passed laws regarding this and some of those states — Oklahoma, North Carolina, South Carolina, and New Mexico — there are punishments including fines and criminal penalties.

And we continue to elect a president this way….why?!

State Rep. Kenyatta was a high-profile surrogate for President-elect Joe Biden during the Presidential Election. He’s also a first-time Electoral College delegate, which means he’ll also be casting his vote for the former Vice President.

But while he’s happy that his signature will be in the National Archives and thinks Biden will make a good president, Kenyatta’s not crazy about the whole Electoral College thing.

“I have dueling emotions about this,” he said. “It’s an honor to be selected as an elector for President-elect Biden and to participate in this historic moment. I’m glad that my signature is going to be in the Library of Congress as a historic reminder of what we did to stand against [President] Trump and fascism. But I also think that it’s time to get rid of the Electoral College and move to a national popular vote.”

Because removing the Electoral College outright would require a Constitutional Amendment, something that the smaller states the Electoral College was created to protect wouldn’t support, the states have been signing on to the National Popular Vote Compact. The states in this compact have pledged to give their electoral votes to the person who wins the national popular vote, not the state vote.

While New Jersey and Delaware have already signed on to the compact, Pennsylvania hasn’t. State Rep. Chris Rabb introduced the legislation that would put the state into it in 2017, but according to the National Popular Vote website, there’s been little movement on it since.

All of the Electoral College ballots must be received by the President of the Senate by Dec. 23.

Congress meets in joint session to count the electoral votes on Jan. 6, 2021.