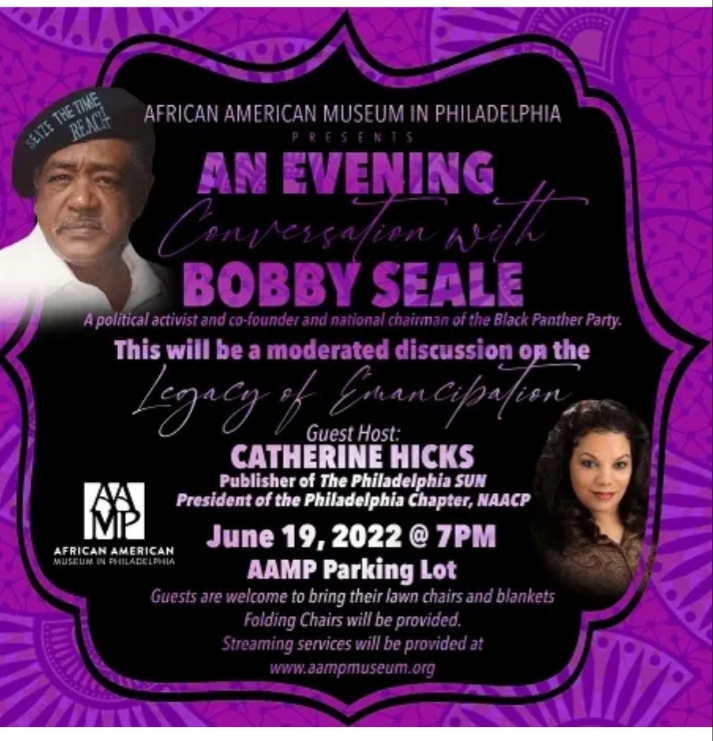 The African American Museum in Philadelphia (AAMP) has announced that Bobby Seale, African-American political activist and co-founder and national chairman of the Black Panther Party, will visit the museum for a live discussion to mark Juneteenth. The event, “An Evening Conservation with Bobby Seale,” will take place on June 19 at 7 p.m. at the Museum and is FREE and open to the public. The discussion will be led by Catherine Hicks, president of the Philadelphia Chapter, NAACP, and publisher of The Philadelphia Sun.

The event will complete a full day of free events hosted by the African American Museum in Philadelphia in honor of Juneteenth.

This year, themed “Celebrating the Legacy of Emancipation,” AAMP’s Juneteenth Block Party, being held on  June 19 from 11 a.m. to 4 p.m, will continue as a FREE, family-friendly outdoor event (rain or shine) that offers activities, music, visual arts, food, a marketplace of local markers and artists, and free admission to the museum throughout the day. Philadelphia radio icon Tiffany Bacon will serve as host and emcee for the daylong event. Internationally acclaimed artists Talib Kweli and Lady Alma and Vertical Current will headline the event..

AAMP’s Juneteenth Block Party, in partnership with Wawa Welcome America and Visit Philadelphia, and produced alongside Indie-Life Media, will kick off Philadelphia’s July 4th celebrations under the banner, “Freedom-Liberty:1776 – 1865.” In its second year, the collaborative effort will continue to provide opportunities to explore the historical significance and thematic ties between Juneteenth and July 4th. Programming this year includes the Juneteenth Block Party, free admission to AAMP, courtesy of Wawa, and a membership drive later in June.

The Juneteenth Block Party will feature performances by award-winning spoken word poet, the Legendary Black Ice; the official drumline of the Philadelphia 76ers, Sixers Stixers; the West Powelton Steppers; the Great Gambian Griots; Dance 4 Life; and master magician Ran D. Shine. The Third Regiment Infantry United States Colored Troops reactors will also perform a reading of the General Order Number 3, which in 1865 declared the freedom of all enslaved peoples. As mentioned earlier, Talib Kweli and Lady Alma will headline the Block Party with the final performances for the day.

Brooklyn-based MC Talib Kweli is praised globally for being one of the most lyrically gifted, socially aware, and politically insightful rappers to emerge in the last 20 years. As an accomplished hip-hop artist, Kweli has collaborated with Pharrell Williams, Common, Kendrick Lamar, and Mos Def, as a member of the duo Black Star. He has used his voice to advocate for voting rights, political engagement, and community building.

Philadelphia’s own, Lady Alma, has received worldwide recognition as a singer, songwriter, and pioneer of house music, blending funk and soul sounds with her distinctive and soaring vocals. Lady Alma is known for her dynamic live performances of famed tracks “Let it Fall,” “It’s House Music,” and “Keep it Movin’,” which have gone viral and kept audiences from across the globe dancing.

Free admission to AAMP will be offered between 10 a.m. and 5 p.m. with timed-ticketed entry, courtesy of Wawa. Current exhibitions at the museum include “Derrick Adams: Sanctuary,” “Taking Care: Recent Acquisitions & Conservation,” and “Black Citizenship in the Age of Jim Crow,”as well as the permanent display, “Audacious Freedom: African Americans in Philadelphia 1776 – 1876.” Advance registration for museum admission is strongly encouraged and can be completed online.

In addition to the Juneteenth Block Party, AAMP will also host a Summer Solstice White and Ankara Membership Drive on June 30. The event will welcome guests to explore the entire Museum with live stages and activities in each gallery space. International recording artist and Philadelphia icon, Barbara Sheree, will host.